It was nearly 4pm when darlin' came back and told me to hurry up and change as he wanted to take me to the Teluk Bahang dam to see the dragon boat race. I was a little hesitant at first, as it was already late. But no one really knew the exact time and schedule so we decided to just go ahead and see if there is any excitement left.

When we reached the dam, we could see many cars parking along the road side. The bridge that leads to the race area was closed to cars, except for chartered bus. We thumbed a ride when we saw a bus passing by. It was nice in the air-conditioned bus rather than to walk the long bridge under the hot sun!

Alternatively, you can park your car at Taman Rimba and I read in The Star that there are free shuttle busses that will take you up to the dam every 20 minutes. (I'm not sure how true it is though!) 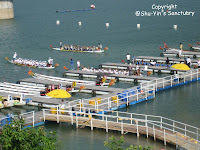 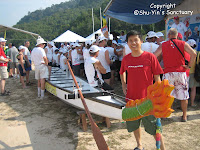 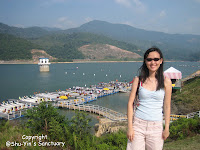 You can feel the excitement in the air. Many people were cheering when their names were being announced for the prize-giving ceremony (for yesterday's race). You can see many teams from many countries there - Japan, Philippines, Canada, India, Malaysia, Singapore, China, Russia, etc. Their flags can be seen flapping gloriously in the wind. I am very proud that Penang is host to such an international event - 6th Club Crew World Championship! 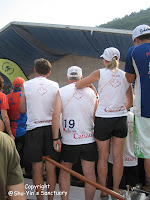 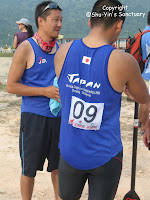 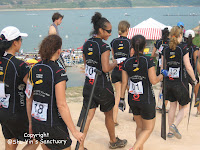 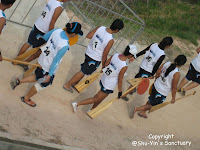 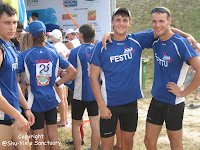 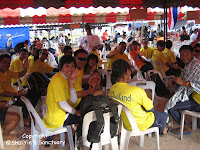 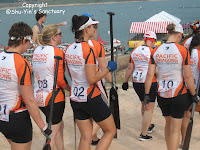 And boy, I was very happy to see our very own Penang team: ) 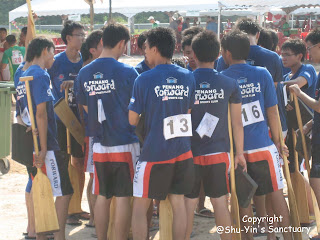 It was a very windy day. Heard that this windy weather is tough on the dragon boaters - more difficult to row when faced against the wind's direction.
However, for me spectators, it was a very fine day with very fine weather. You can feel the wind against your face and I didn't even mind tousled hair...as long as I get to enjoy the wind!

Here is a video of the preliminary rounds of the dragon boat race from my view:


However, being host to such international events, it is a pity that there are not enough promotion to Penangites about the details of this event.
All i can see is a few measly signboards stating that CCWC dragon boat is being held at Teluk Bahang Dam from 31st July to 3rd Aug 2008.
No time is being stated and etc. Even the http://www.penangdragonboat.com/website offers no further details.

I think Penang or the dragon boat committee can improve on this. More marketing or promotion should be done so that we are more aware of it and we can at least know the schedule of this event. All I want to do is to be patriotic to my state and country and be a supporter of this event!
Posted by tanshuyin at 8/01/2008 11:45:00 PM

if only i could go that day =(
looks fun!

din take pics of pg fwd premier wan ar... dat one looks like the juniors leh... so no lengchai to kap ahem ahem....

hehe...there are many other teams. but didnt take all ler. i think i didnt catch Pg Fwd! must have missed them!

last year's was fun.. everyone played in the rain/mud wakakakakak!!!