Went for ultrasound this morning at Loh Guan Lye Specialist Centre. Dr. Sally Ong referred me to Dato' Dr. Ragupathy (radialogist) and he is so good. He is also friendly and smiled and talked to me the whole time while doing the ultrasound on me.

He found some benign lumps in both my breasts. Actually, the computer says they are benign and should be. But we can never be too sure. To be 100% sure, the only way is to surgically remove them and have a biopsy on them.

I woke up this morning feeling like using the home pregnancy test kit to see if I am pregnant. I know my period is not due yet for another 3 days but basically it has already reached the 28-days cycle, right?
Anyway, I read somewhere that it is more accurate to test it first thing in the morning during your first pee as the hCG level is higher then.
So, what did I get? A faint line line of a positive sign. Is it a faint line or is it not? 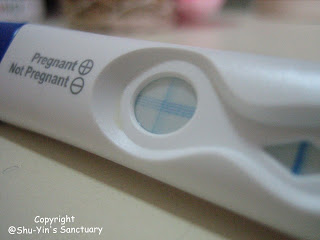 As I have not missed my period yet, I guess I should have been a little more patient and test it next week to confirm if I am pregnant or not!
Let's wait for a more accurate result next week!
Posted by tanshuyin at 9/29/2008 01:24:00 PM No comments:

Lump in my left breast

The little lump on my left breast is now getting harder and more significant. I used to have trouble feeling it there (because it is rather deep inside), but now it is so easy to feel it there.

Dr. Sally Ong just told me today to have it removed asap. But I need to be sure that I am not pregnant and I wouldn't know until sometime next week.

Email ThisBlogThis!Share to TwitterShare to FacebookShare to Pinterest
Labels: Updates

I am still a newbie in Wordpress...still cracking my head to figure out what is what. So

Please click http://tanshuyin.wordpress.com/ for my future blogging entries. If all doesn't work out as I hope so, I will move back here.
Posted by tanshuyin at 9/07/2008 09:52:00 AM No comments:

Email ThisBlogThis!Share to TwitterShare to FacebookShare to Pinterest
Labels: Updates

I'm talking to a special friend of mine when I explained to her the reason why all my blog entries are like my journal.
I blog about normal stuff - The places I've been. The things I've seen. The food I enjoyed. The company I treasured. No secrets.

I feel that by blogging these 'normal' events that is happening in my life, I somehow feel that I've freeze those moments that made my day!

I want to look back on my entries...years later...and see what I've done in Lumut for example. What I ate there and who went with me.

Email ThisBlogThis!Share to TwitterShare to FacebookShare to Pinterest
Labels: Life So Far

Aunt Flo visited me right on the dot

Mine is usually a 30-33 days cycle. This month around, it is a 30 days cycle which means Aunt Flo visited me right on the dot - same date as last month!

This is gonna be one long post. So if you don't have the time to read it, you better x this window now!

Our whole family have our own plans for the Merdeka long weekend. Dad went to Hanoi, Vietnam with his ex-schoolmates, Mum, Ah Yee, Peter & I went to Lumut while Min went to stay over at her friend's hse in Butterworth as she was working for the weekend. Wen is already in South Africa. Wow...all at different places! No one was at home!

Mum, Ah Yee, Peter & I started our journey to Lumut quite late. Altogether there were 10 of us going. Irene and Siew Phaik followed Loh's car together with his wife, Hoon and son, Jason. Chooi Ting drove my dad's Unser and fetched our family. We left Penang only at 6.30pm. Along with a few toilet and food stops, we only reached Lumut at 10pm.

We stayed in Swiss-Court Holiday Apartment this time because we have so many people. We even brought our own matresses, sleeping bags, and blankets. 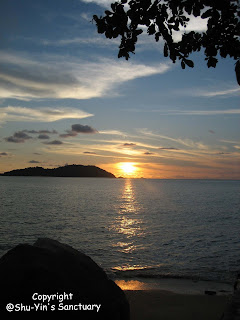 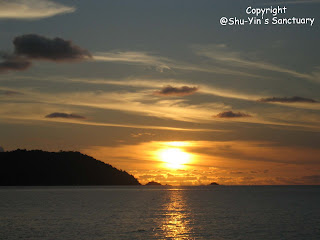 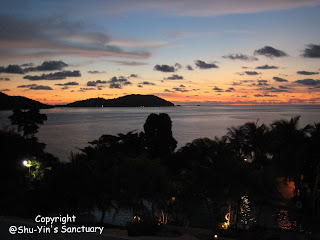 Siput korek-ing was nice though it was not my effort. Due to Sun being the 1st day of the month according to the Chinese calendar, it was high tide until after 7.30pm. So they went to look for siput until the sun set and used torchlight. There were so many siput. We cooked them for dinner that night. 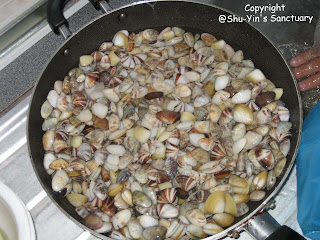 I also had a chance to cycle. Haha. noticed how small is my bicycle? Actually, it is just right for someone like me who doesn't know how to cycle. This is so that I can just use my 2 legs as breaks when I am about to fall on the side! I managed to cycle some distance, but I still don't know how to make a turning. My palms hurt as I gripped to hard on the handles, fearing that I would lose balance and fall. 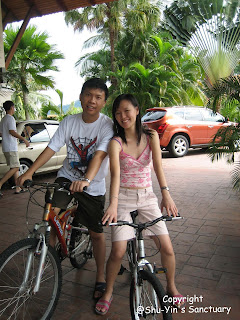 So do I know how to cycle now? Still NO...sigh. But getting better ;D

Managed to squeeze some time to go the Turtle Sanctuary in Segari town. Wow...the turtles were huge! And there were so many baby turtles...so cute! 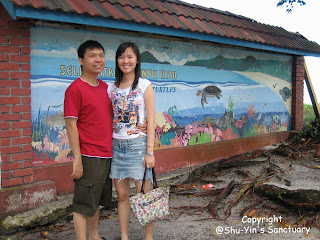 (darlin' and me @ Turtle Sanctuary) 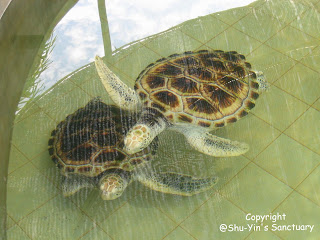 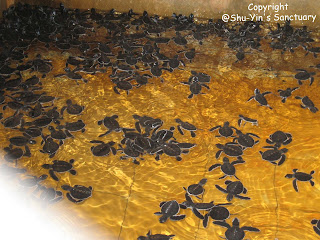 On Sun afternoon, we drove out to the nearest Lumut town to have lunch at a local seafood Restaurant Siang Seng. The food was okok. I like the herbal frog meat and also the goat's meat 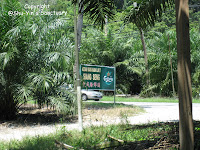 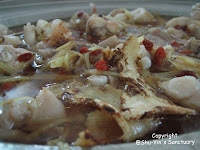 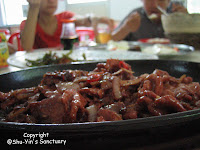 It was my first time seeing 'coconut tuak' - some kind of liquor made using fermented coconut. I did not even taste it because the smell was terrible. I could not bear it to be near me. 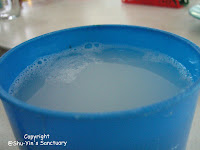 We left the place at 10am on Monday morning after having maggi mee for breakfast. Drove all the way to Setiawan and stopped at the famous Gong Pian aka Hock Chew Peah biscuit stall. Waited for an hour before they were ready and the queue was long. Setiawan is the 'Hock Chew town' where everybody there speak hock chew dialect. Me, being a 'Hock Chew kia' could not understand nor utter a single word. Haha.

Anyway, these biscuits are being 'roasted' manually in a big urn, something like how they make roti naan. 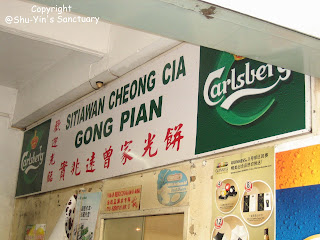 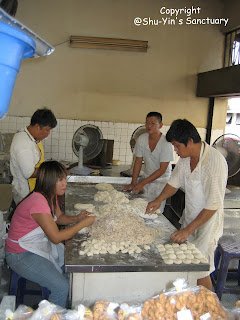 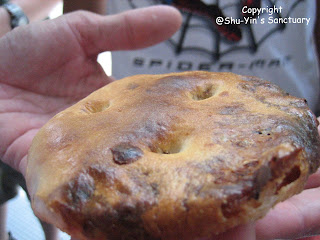 Also a bought a bottle of the famous Kampung Koh chilli sauce. RM2.50/bottle. 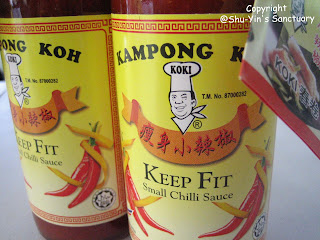 We then went to search for lunch. Had seafood again at a recommended local seafood restuarant called Amu Coconut Villa Seafood Restaurant. The food was delicious. That is why i posted every single pic of what we ordered here. 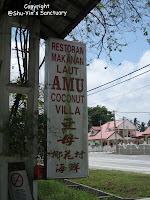 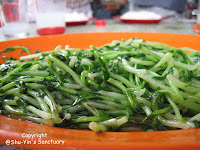 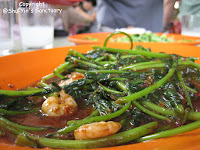 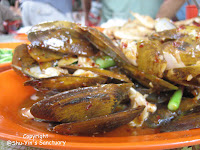 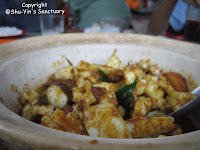 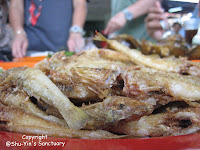 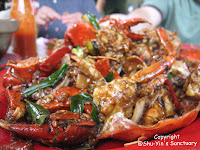 With a full stomach, I slept in the car on our way to Kellie's Castle in Batu Gajah. Upon reaching, it was already near to 5pm. They told us we need to get out by 5.30pm because it is the Puasa month and they wanted to finish off early. We then hurried inside the castle after paying rm4/person.

So what is Kellie's Castle? According to Wikipedia, "The unfinished, ruined mansion, was built by a Scottish planter called William Kellie Smith. According to differing accounts, it was either a gift for his wife or a home for his son". 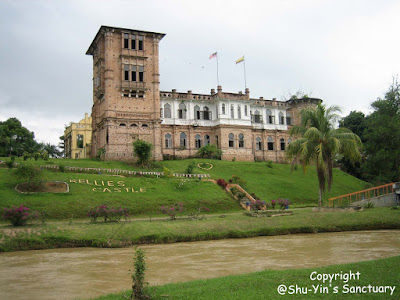 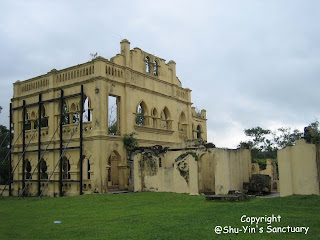 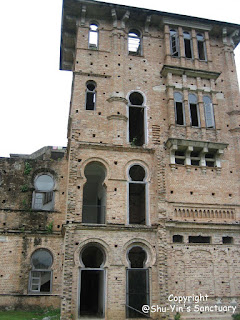 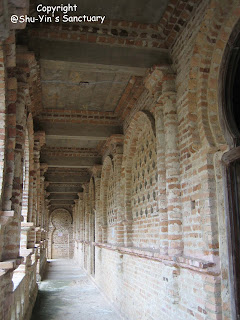 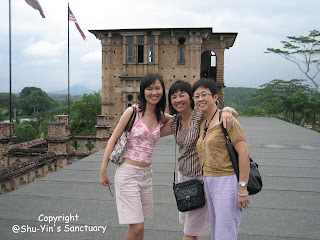 We had an enjoyable half an hour exploring the ruined mansion, looking at the architecture and design of the building. I was surprised to see the teak wood still so sturdy and strong (no white ants!) after more than 200 years. I was amazed to see there were lift shafts for the '1st Bucket Lift in Malaya'. There were also secrets tunnels, one of which leads to the Hindu temple through the Kinta River. However, this tunnel has now been sealed for safety reason.

After that, we headed back to Penang, stopping at Juru Autocity to pick up Min and also Jelutong for late dinner. We reached back home almost 10.30pm.