Darlin's birthday was on the 18th August, Monday. I could not celebrate birthday with him on that day because I was having a line dancing jam in IDT that night. This line dancing jam was planned quite some time ago and it took us many days to agree on this date.

And I also could not celebrate it one day earlier as we were rushing back to mum's hse to watch Astro Live Badminton Finals of Lee Chong Wei.

So we only celebrated on Tuesday night. Luckily Peter was a good sport. He did not grumble but he insisted in being the 'king' on his birthday. Everything he said, I need to say 'YES darlin'. Hahaha...

We went to Korea Palace - BBQ Restaurant in Tanjung Tokong, somewhere opposite Subaidah. I believe the restaurant is quite new. When we stepped in, everyone greeting us in Korean (we guessed so as we could not understand a word!). The place was not full. 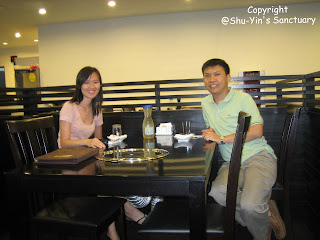 The waiter from Myanmar was very friendly. He helped us make some choices on what to order and recommended a few dishes. As Peter is not fond of beef, we skipped that. We decided on having barbecued Chicken with Teriyaki Sauce and barbecued Pork with Soya sauce. 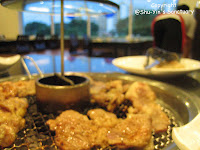 We were being served free flow of cold Korean tea. Kim Chi started coming in - eight dishes I remembered. One of the waitress then brought out a complimentary Korean pancake for us to try..how nice of them! 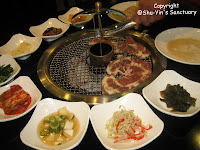 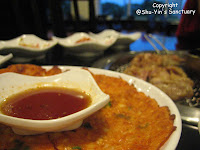 As usual, the waiter barbecued the pork and chicken pieces in front of us. One thing we noticed is that they don't have those smoke thingy (smtg like 'kebuk wasap' which was supposed to suck out all the smoke from the barbecue. Luckily, there were only a few tables having barbecue, if not it will sure leave a smell in our clothes and hair.

It was a big portion. We kept on ordering the fresh vegetable to wrap the meat. We were very full by the time we finished everything. There were free deserts - a slice of watermelon each and a cup of sweet cold soup! 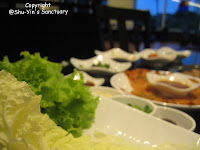 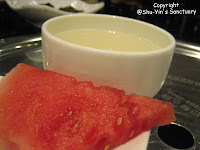 All in all, the service there was excellent and the price was fine too. And I like the environment. Classy yet cosy. Taste-wise, it was so-so!

Wow... nice place.. i wanna try one day.. maybe you can organize for our sept get2together

I've been here and I wasn't really impressed. The food was just okay. Perhaps I have high standards of quality. :P

karen ooi...yes. i also mentioned in my post that the taste was so-so nya! but service for us that nite was so good that we dont mind going again! :D