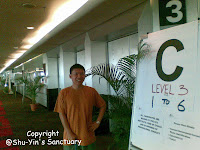 Mum, Dad, Peter & I went down to KL last weekend as Peter's CFA Level 2 exams was held in Sunway Pyramid Convention Centre (SPCC). I guess the pressure was on Peter - my parent tagging along to KL, just so to give him moral support and of coz for us to go shopping! Pardon the blur pic - it was taken using my mobile Nokia 6300. 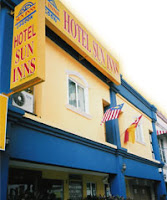 We stayed in a budget hotel called Sun Inns Hotel near SPCC as it would be more convenient for Peter. Sun Inns Hotel is very affordable. Only RM110 for family room (4 person), consists of a double bed and also a double decker bed. The bed mattress wasn't too comfortable as Peter & I had bodyaches when we wokeup. It has a/cond and also a wall fan. The wall fan creaks and it was quite annoying.
But one main thing I don't like about our room is that it doesn't have a window! Actually, it has a small window in the bathroom but it was not open-able. Imagine if there is any emergency, we would not be able to escape easily.
And because of the lack of windows in most rooms (we saw the floor plan), the air circulation was not good, thus it smells funny - like stale air.
But all in all, as nothing happened during our stay there, i must say it saves us some money by staying there. But then, I don't think I will ever go back to the same room again - a room WITH a window is a MUST for me! 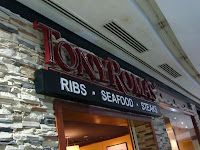 On our 1st day, we had lunch at Tony Roma's @ Sunway Pyramid. That was my 1st visit to Tony Roma's. I've heard good reviews about Tony Roma's from many people and I am happy I got to try it out myself. We tried Tony's Sampler - which was a trio of appetizers - Red Hot Buffalo Wings, Spinach Dip and our signature Onion Loaf matched with Bleu cheese dressing, salsa, sour cream and our house BBQ dipping sauce. And also Bountiful Beef Ribs - Basted with TR’s Original sauce. The portion was so BIG that it was enough to feed 6 hungry people. We were served unlimited bread with some kind of garlic sauce all through dinner as well. Good authentic American food with plenty of sauces. I like the fact that it serves non-greasy food.

Another highlight of our trip to KL is the fact that I bought many beautiful clothes and shoes. And for once, I did not buy any bags. Oh...mum is a bionic woman when it comes to shopping! She shopped non-stop. Never once stopped for a rest or leg-pain, etc...unless we called for it! We shopped mainly in Sunway Pyramid, and only went to 1-Utama as there was a golf fair and dad wanted to buy a Driver for a leftie, though he could not find one that suits him. Sunway Pyramid alone is big enough for us first-timers. The shops there wasn't too "high class" - unlike KLCC which most brand there were Salvatore Ferragamo, Louis Vuitton, Coach, etc...too expensive for me. Sunway Pramid has Nichii, FOS, NafNaf, Vincci, etc. :P 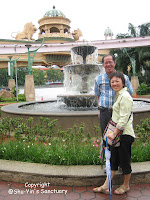 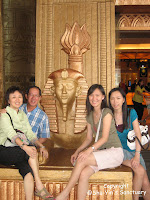 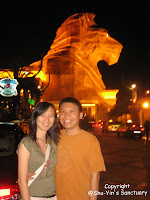 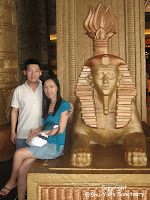 eeee... eat ho liau and enjoy so much.. HMPHHHHHHHHHH

anyway, u should know by now d wat mum is a bionic woman is shopping.. remember her bangkok trip? o.O

haha..yeayea..she more hebat than peter's cartoons' superheroes. she is ShoppingWoman

sun inn is the one with the giant hanging duck rite? :P

shu-yin, did you cut your hair? From the pic - you and Peter - your hair looks shorter.

peen..yayar..cut my hair many many times dee. but alwiz same style. juz that my fringe is shorter now.