I only have one word for my first attempt in baking chiffon cake - DISASTER!
My Orange Chiffon cake cracked at the top and then sank and shrank & wrinkled like a prune when I removed it from the oven. And the bottom of the cake was dense.
However, it was edible, just that it did not taste like chiffon cake at all. It tasted like normal orange flavoured cake. 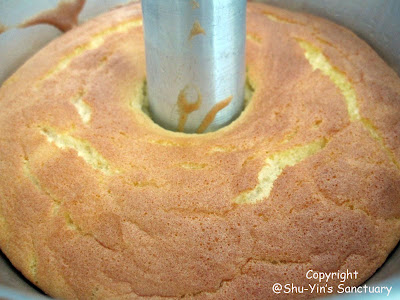 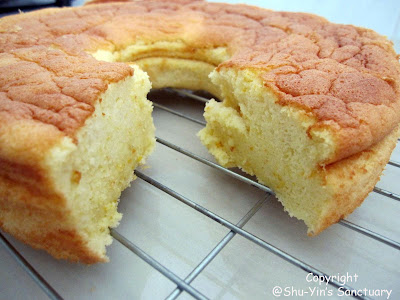 My second attempt was better.
I followed a different recipe which calls for the egg whites to be beaten to the soft peak and not stiff peak. However, I think I still overbeat it as it takes seconds to reach from soft peak to stiff peak. By the time I stopped to have a look, I think it crossed the soft peak stage. Blueks.

Anyway, my chiffon cake shrank too, but not too bad as my first attempt. The cake was nicely browned all over although it did not rise as much as I hoped it would.
Therefore, my cake was only a few inches high and was not as fluffy. But it was light enough and taste was even better than my first attempt. And there were NO big holes in it. Yay! 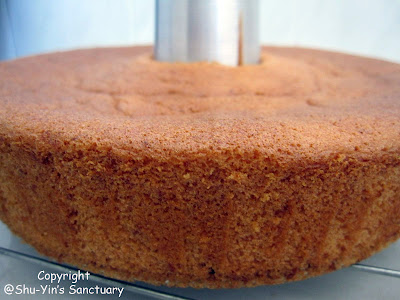 2nd attempt - nicely browned all over 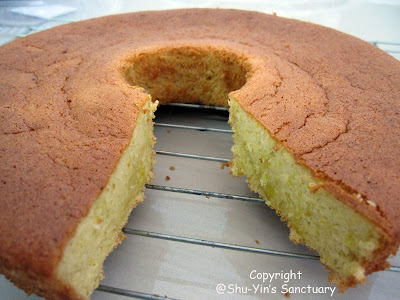 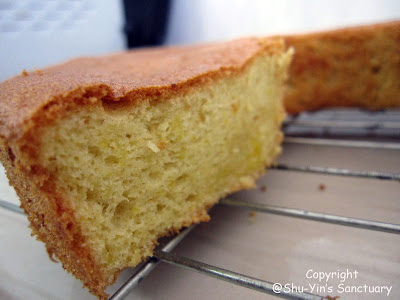 2nd attempt - no large holes which is good but then not fluffy enough to pass as a chiffon cake
I finished baking the cake at about 3.30pm. In less than 3 hours, the whole cake was gone. So I guess even though it is considered a failed chiffon cake, it was not too bad, huh? :)
Posted by tanshuyin at 5/31/2010 02:46:00 PM