Shern's First Outing With Our Friends

Yesterday dinner was to celebrate Ashley's Fullmoon - though it is like late by two weeks plus. :)
It was also Shern's first outing with just our friends.

The trip from Tg Bungah to Chayu Kafe in town was a 45 minutes car ride due to the super jammed Penang roads. Cars were crawling everywhere. I guess Friday nights and school holidays explain it all.

Because of the this, Mich, Wai Min and Yi Jie could not make it from Butterworth. It was a waste because if not, all the babies of the group would be there.

Not surprisingly, we arrived more than half an hour late. Shern was getting restless in the car and so was kinda happy when I carried him out.

Anyway, usual comments of Shern looking like daddy were being mentioned again and again. 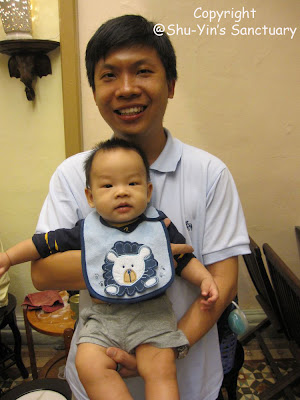 11 Dec 2009 - Like Father, Like Son
I'm proud to say Shern behaved himself alright last night. No tantrums. No crying.
Just superbly active all the while. Even Karen who saw Shern for the first time yesterday mentioned that Shern is really such an active child. I guess she dared not say the word 'naughty'. :P

Ashley being the princess of the day was behaving like a little angel. She has got big beautiful eyes. She slept most of the time though. 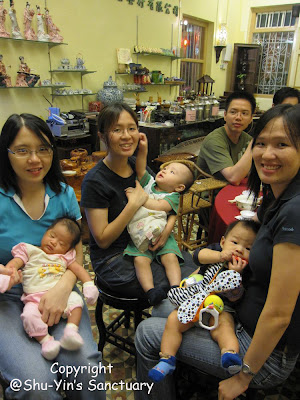 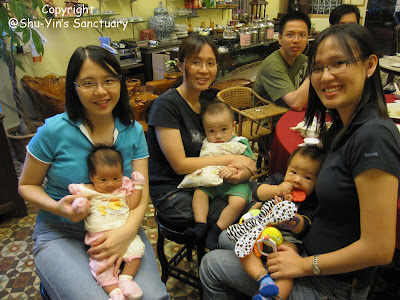 Siow Sen with Ashley, Ee Xion with Marcus, me with Shern

It is not easy bringing the super active Shern out. But it is bearable because this group of friends all have babies. So they are more sensitive to babies needs. 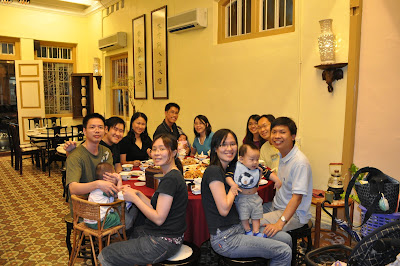 Group Photo (pic stolen from Karen Ooi's blog :P)
During the ride home, although no more traffic jams, Shern started to make noise. After a while, he fell asleep in my arms.
Once reached my mum's place, he woke up. Took this pic below because of his huge stomach! :) 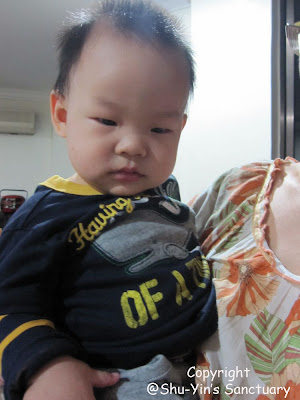 yeah it was my first time meeting Yiu-Shern! He's active like a wiggling worm and not naughty at all, I repeat. :)