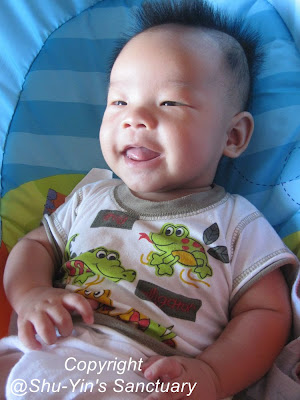 Shern has lots of achievement this week *mummy Shu-Yin beaming proudly*
Grasp/Grab/Bat
Shern has started reaching out his hands to grasp, grab and bat at things.
He loves touching his birdie toy at his rocker. And he also likes to grab his Eddie the Elephant when put in his cot in mum's place.

Tummy Turnover
I was surprised when I put him down on his tummy and he turned over and was facing back down. Wow...he has finally learned to turn. However, he only knows how to turn one-way. He still doesn't know how to turn from back to tummy.
So for now only tummy-to-back.

Chuckle-Laugh
I think I am witnessing the start of a laugh from Shern. It was more like a chuckle-laugh. He does his chuckle-laugh whenever we tease him - be it burying our face onto his stomach or making monkey faces at him - whatever pleases him I should say!
Ohh...I am still waiting for the day he laughs out loud! :D 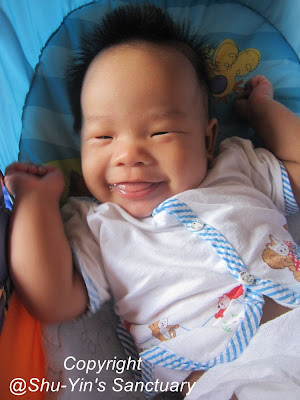 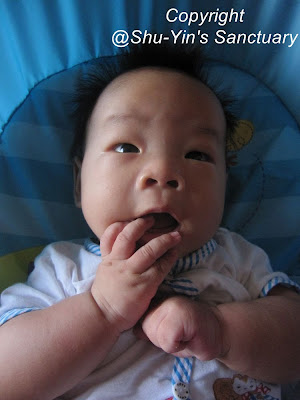 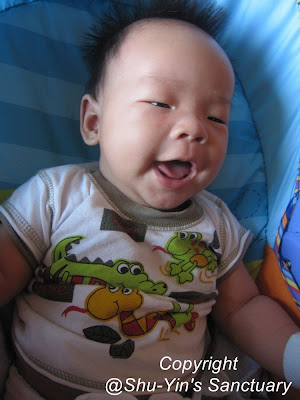 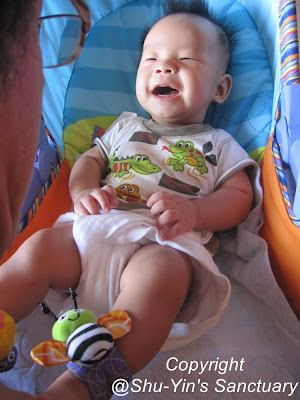 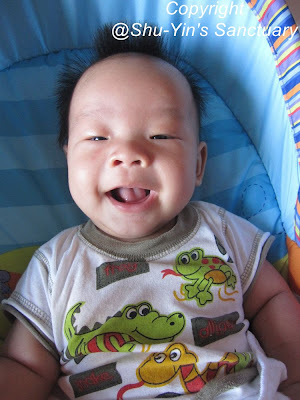 Ok, enough said about all his angelic moments. Let me now mention a few of his naughty moments.

Cough-like Sounds
These few days, Shern is making cough-like sounds. I know it is not an actual cough. He seems to 'force' the cough-like sounds out. He usually makes the sounds when he is grumpy and wants to be carried or seek for attention.
Is it one of his attention-seeker tactics, I wonder?

Middle-of-the-Night Wakings
One of the nights, Shern woke up in the middle of the night at 2am and started 'goo-goo-gaa-gaa-ing' with me. I nearly fainted when I saw how alert he was.
Initially I tried to ignore him. I refused to look at him in the eye or to talk to him. He of course started to make noise.

I gave up and carried him in my arms and starting singing songs to him softly. I finally lulled him back to sleep after 1 hour! *pengsan

How Is Mummy Doing?
I bought extra 24 BPA-Free Bumblebee Breastmilk 5oz Storage Bottles at a discounted price online. I finished filling them up in less than a week's time. I need more!
Sigh...I should have bought more. Now I am going to waste money on delivery charges.
Posted by tanshuyin at 9/29/2009 08:27:00 PM