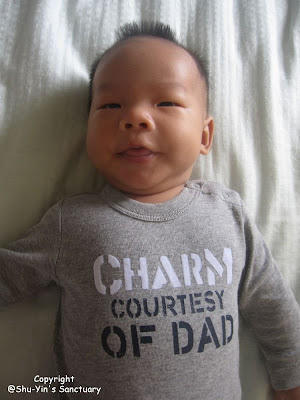 24 Aug 2009 - CHARM courtesy of dad!
Yiu-Shern's 12 weeks Milestone
Poop-less
Shern was poop-less for 2 days and I was getting worried. This was the first time that Shern failed to poo daily. Usually, he poo-s once or twice a day.
On the third day, I panicked and called Dr. Dan. He said not to worry as Shern is on breastmilk, and only to call him if he still does not poo for 5 days.

Then not too long after the phone call, Shern poo-ed and I was amazed that his poop was still so soft. I was expecting hard poop.

When he poo-s that time, I was so relived and my facebook status was "Shern poo-s after 2 days....ahh....shit of gold!"

Government Clinic Checkup
I took Shern to the Tanjung Bungah Government Clinic for checkup and Shern was already 6.2kg @ 24 aug @ 2mths 2 weeks.
Wow......Shern is really getting heavier and heavier.

Bottle Change
As Shern is nearly 3 months old now and he seems to be having difficulty using the Stage 1 teat of the Breastflow bottle. So I wanted to change him to the Stage 2 teat.
As I received Bfree Plus 9oz Bottles with Stage 2 teats as a gift, I tried to change him to this bottle & teat brand.
Luckily, Shern was able to adapt to the change.
I am so happy. Don't need to spend money to buy Stage 2 Breastflow teats.

Away from Shern
As mentioned in my previous post, this week I was away from Shern for 2 full days. 4 days 3 nights to be exact. I miss him like crazy. 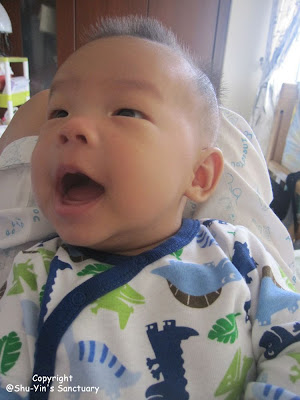 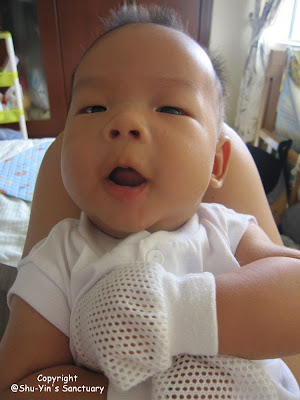 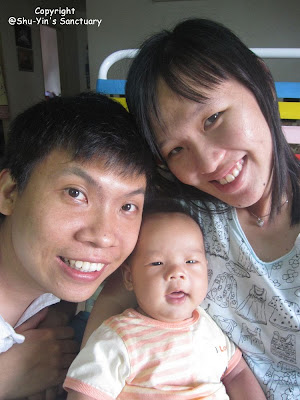 Email ThisBlogThis!Share to TwitterShare to FacebookShare to Pinterest
Labels: 3 of Us, Life As A Mummy, Lim Yiu-Shern, Shern's Weekly Updates

the onesie was a present by one of peter's friend ;)
he bought it from australia i think! ;)

i dont often show my emo side but reading this post somehow i feel very happy for you. i guess a nice person like you deserve the very best. hope all goes well and shern will grow up as smart as me. will catch up with you soon.

oh ya..shit.. dun keep on blogging about the same topic can ar.. blog la about the very beginning of making the baby. lets start with the fore play part first.. quick quick tell me

Shern looks like big boss of the house in the last pic '3 of us' :)

karen...big boss indeed he is!