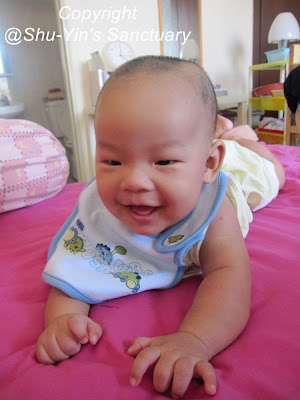 Yiu-Shern's 19 weeks Milestone
From Funky Hair to Botak
Started the week with a haircut. Since Shern is already four months old, it is a tradition to have his 2nd hair cut. Anyhow, I find his hair too long and is sticking up. So off to haircut. The hairdresser is very skillful. In just less than 2 minutes, Shern's funky hair were all scattered on the floor. 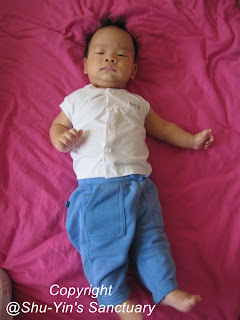 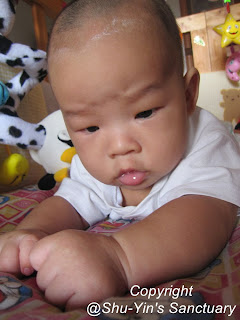 I sure hope he won't use them to bite the thing that feeds him - my nipples!

Happy vs Sad Face
Usually, Shern is a happy baby. But now that he is teething, he can be a very grumpy baby. He sulks and thrive for attention. He wants to be carried all the time and makes lotsa pitiful noises and faces. 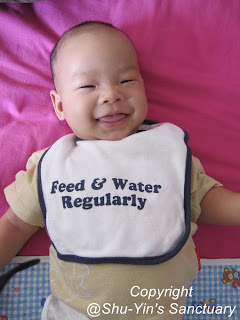 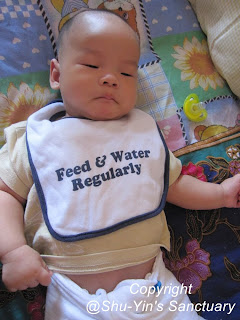 Crying fits
Wanted to go to QBM with my family since Wen came back from KL. She will be off to KL then back to South Africa soon. So decided to leave Shern with MIL for 2-3 hours.

Left Shern at MIL's house at around 1pm. Then hubby drove me to QBM to meet the rest of my family there. The moment I stepped into QBM, phone call came in. MIL called to say Shern was crying non-stop. She even mentioned that he seemed to have a little fever. MIL called me to go home immediately after my lunch and not to go shopping.

I panicked of course. So I did not even join them for lunch. I ordered McD RM5.95 take-aways and left QBM in a hurry. Halfway in the car, phone call came in again. Shern still had not stop crying. I could hear him through the phone. I told MIL I was on the way.

When I reached MIL's house, the moment I opened the car door, I expected to hear his cries. Surprisingly, the house was quiet. I went into the room and saw Shern smiling and talking to MIL. Haha. He had just calmed down and was happy chatting and smiling.
I touched his forehead and took his temperature but there was no fever. I suppose he cried til he 'seems hot'

Haha. My naughty baby just wanted to trick me into coming home!


Bibs
Look at his different bibs. Nowadays I can't seem to see his top. His oversized bibs are covering his clothes underneath! 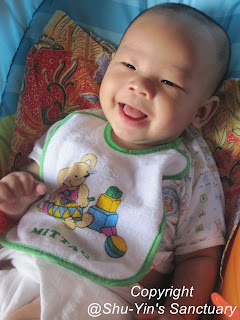 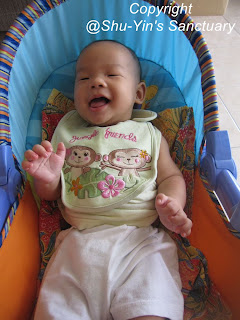 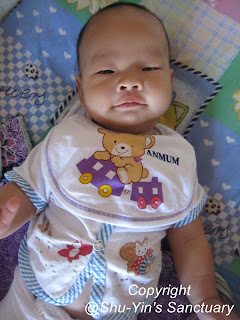 Pho-pho & Ah Kong
My parents adore Shern. Dad is always singing to him. Dad sings to him oldies by the way. Shern is now very familiar with songs from the 60's.
Mum also always carries Shern the moment she came home from the office. She is the one who pampers Shern the most, carrying him and buying him toys.
Sigh...grandparents - their nature is always to spoil their grandchildren! ;) 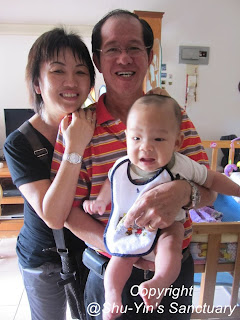 Shern's Mesmerizing Smiles
Shern's eyes are so small that they seem to disappeared everytime he smiles. But oohh...I still find his smiles so mesmerizing.
One minute I wanted to be angry at him for crying non-stop. The moment he smiles at me, I sayang him oh so much! 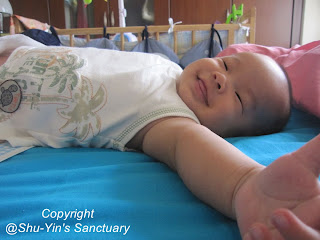 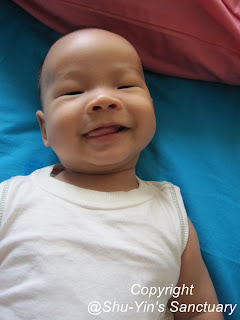 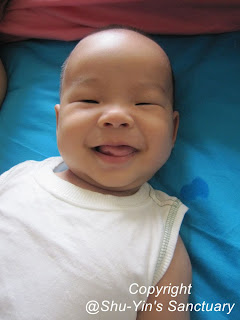 How Is Mummy Doing?

- Cursing the damn washing machine for the whole week. Water could not drain out, thus need to use my bare hands to rinse the clothes. Hates rinsing those heavy stuff - jeans, towels.

- Breastfeeding is going on normal. Not much improvement. Still expressing 5-6oz every 3 hourly. Heard other breastfeeding mums expressing over 10oz @ 4 mths. Feeling a little depressed though.

Email ThisBlogThis!Share to TwitterShare to FacebookShare to Pinterest
Labels: Life As A Mummy, Shern's Weekly Updates

i just found your blog and it's real interesting to read. your bb is cute btw. i just had a bb too, i guess ard the same time with shern :) he was born on 23/7 and now he is 3 months old...
there r some much similarity between them....hope to read of you and ur bb milestones..

Hi Wabbitfoot, thanx for dropping by. Oh, ur son is about 1 1/2 mths younger than mine.

I visited ur blog too and dropped in some comments to ask a few recipes from you ;)

Hie Wabbitfoot, I think I asked for the Applecake & Dan Tatt recipe.

Can u pls send to my email tanshuyin[at]yahoo[dot]com?