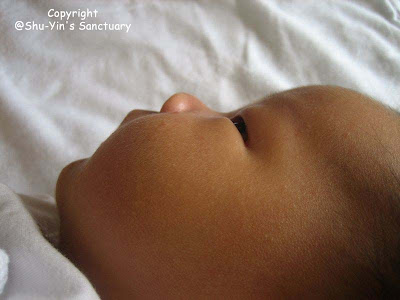 24 July 2009
Yiu-Shern's 7 weeks Milestone
Jaundice
After being formula-fed for 4 days, his bilirubin level dropped from 245 to 135....magic!
This proves Dr. Dan is right - he is really having breastmilk jaundice.
Anyway, that puts our hearts at ease.
We are bringing him for another test next Monday before we convert him back to exclusive breastmilk.

Weight
We weighed him at the Tg. Bungah gov clinic last Monday when he was taking the Bilirubin test and he weighs a hefty 5.1kg.

However, some of my mum's friends commented that he is not chubby enough. But I think as long as he is contented and full after his feed and is happy - it is enough.
Everyone always take formula-fed babies as benchmark - which may not be correct and accurate.

Anyway, I find Yiu-Shern is tall for his age. He is also getting chubbier.
At the rate he is going, he will soon outgrow his clothes.
What a pity, I received many nice 0-3 mths clothes from my friends.

Hair
His hair is getting longer.
He now looks like a punk!
Anyway, I noticed that his hair started dropping.
Once the 'lil bump on his left side of the head subsides, we will take him for his first hair cut to have his hair trimmed real short :) 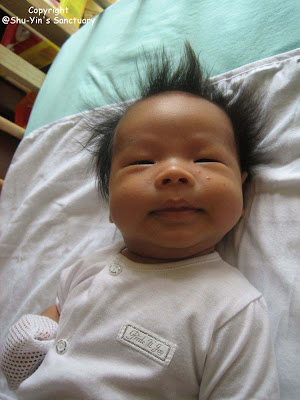 Favourites
He absolutely loves his musical cot mobiles - both the one in my house (Fisher-Price Ocean Wonders Mobile) and the one in his pho-pho's house (Anmum's Musical Mobile). His eyes track the objects (fishes/moon/stars) rotating. It is so nice to see his eyes so fixtated at them. 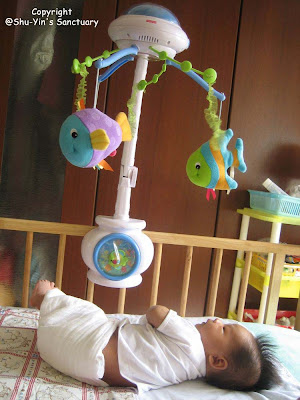 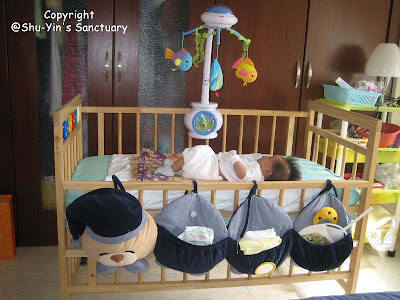 Shern in his baby cot at home

Car Seat
Yiu-Shern has gotten used to sitting quietly in his car seat.
He looks so cute sleeping snugly in his car seat.
During the ride home from pho-pho's house which is after dinner, he will be fascinated with the street lamp and all the lights flickering as our car zooms by.
For the ride to pho-pho's house in the morning, I usually bring a toy to divert his attention whenever he wants to make noise. 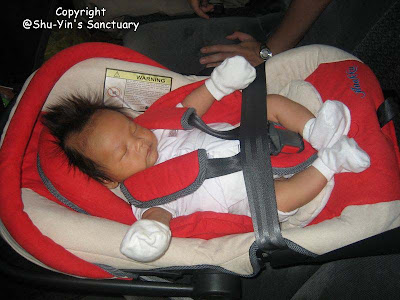 How Is Mummy Doing?
I am starting to get a bit worried about my flabby belly aka mummy tummy. I wonder if I will ever have a flat torso again.
I doubt so as I did not go for 'urut'. I can't do situps. And I have no money for Marie France Bodyline.
Sigh...

I need to force myself to drink more water. I feel like I don't drink enough water.
Insuficient water = Insufficient breast milk

I am still pumping ~4oz every 3-4 hourly with Medela Electric Mini E breastpump. (I have tried a few breastpumps and I still find this the best.)

I like your car seat. He really look cute in it.

Thanks thanks. I bought it 2nd hand from an angmoh in ebay. The angmoh is now my fren ;)

Hi hi
Just reading this :D
Double breastpump is better for pumping. It is supposed to trick the breasts into believing you have twins and thus produce more.
Also, yes, chubby is not necessarily good! Breastfed babies are firm to the touch. SY