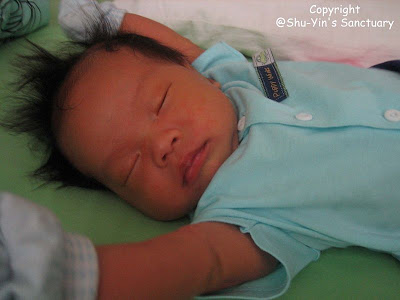 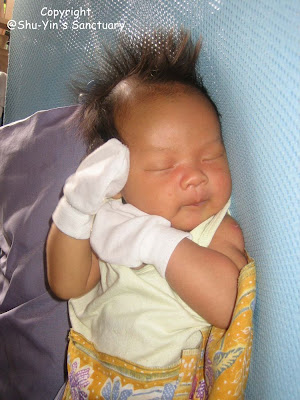 13 July 09
Yiu-Shern's 6 weeks Milestone
Jaundice
As mentioned, Dr. Dan recommended me to feed him formula for 48 hours if I wish to lower down his breastmilk jaundice level immediately.
But instead of 2 days, I fed him formula for 4 days until his next bilirubin test at the Govt Clinic on Monday.

Luckily for me, he did not reject formula and he drank it with the Breastflow bottle.

Poop & Pee
One thing I notice is that his frequency of poo-ing and pee-ing has also changed…he used to poo frequently, but in smaller amounts. In the past week, I noticed that he now poo-s less frequently, but in larger quantities…

Due to breastmilk consumption, his poop are like mustard - golden watery consistency. Therefore, it is rather messy. And when I say he poo-s in large quantity, it means that he wets his lampin right up to his waist. And if I am careless and not pin up his lampin tight enough, his poo will oozes out - eeeewwwwwww

Development
Development-wise, his neck muscles are getting stronger day by day.
When I put him on his tummy, he is able to lift up his head fully and turns from left to right and vice-versa. ( he looks like he is doing mini push-ups)
Even when I burp him, he now always refuses to lay his head down and always tries to lift his head up.

His hands are also very strong now. When I carry him and if he is making a fuss, he uses his hands to show his temper. He will stretches his hands and punches here and there - and that hurts.

He smiles more frequently now...though it is still difficult to make him smile when you want to. He smiles when he likes - when he is pleased and not when we are making funny faces for him to see :D

He is now spending more time awake. He sleeps less hours now. And the bad thing is that when he is awake, he cries!

One bad thing. He absolutely loves to be carried.
It is really difficult to put him down after he falls asleep in our arms.

How Is Mummy Doing?
I am getting used to being mummy now. Got used to the daily routine revolving around my little baby boy.

Felt a bit guilty eating raw salmon as I am breastfeeding. Hopefully Sushi King mantains their quality and those sushi I ate are fresh and have no bacteria.
But I think I will continue eating them, as long as I think they are fresh :)
Posted by tanshuyin at 7/23/2009 11:32:00 PM