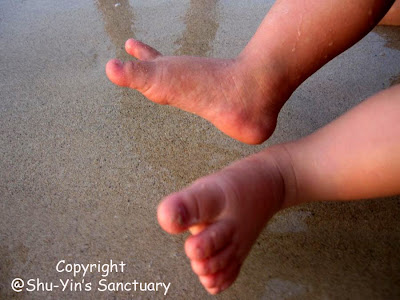 14 February 2011
We took him to the beach in Phuket. It was his first time to the beach. And guess what? Shern hates the sand.

He hates the sand which got all sticky on his feet. He whined to ask me to wipe the sand off his feet the whole time.
And when I tried putting him down the beach on the sandy area, he folded his legs and refused to touch the ground. Arrgghhhh!!!!!

So in the end, he ended up just playing with his toy trucks on the beach towel. It was bad because he wanted me to accompany him there. So I did not get to pose and take photos with my sisters. :( 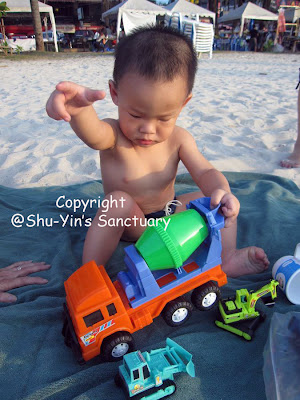 But after awhile, he got bored and he wanted me to carry him to the water. He then wanted to touch the water but not the sand. Arrghhh......
So he got cranky after awhile and we had to leave because he was whining non-stop then.

same with jaden...he love the water but not the sand..and he love waves..i pun tak tau how to make him love sand...aiya

How come ar? I think Shern doesnt like the sand texture on his feet/hands.