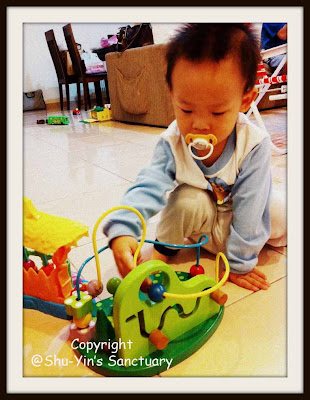 Speech
There is actually not much obvious development in just a month. The most obvious being that Shern is improving on his speech. He can speak more words by the day.
And to hear him sing Justin Bieber's 'Baby Baby Baby Oh' is really awesome. That is the most words he can manage for now - Baby Baby Oh - 3 words in a row.

And he is also more interested in playing with the wooden loop-y toy (see photo above) I bought for him more than a year ago. This is an educational toy which helps him on hand and eye coordination and creativity. Although he played with this since a year ago, Shern now has more steady hands and is able to loop the beads through the loops really well now.

Pacifier
One thing though, he is now very very addicted to his pacifier. He used to only suck it when he wants to sleep, but in recent months, he asks for his pacifier even when he is awake. This is bad because he tends to salivate more when it is in his mouth. And he is also into biting it often. And Avent Pacifiers don't come cheap. So now I buy him cheap pacifiers. I'm thinking of weaning him off pacifiers soon.

Little Imitator
Shern learns things very fast. And he is now coming to an age where he tries to imitate us in everything we do.
Like I was using my teeth to bite the paper I was holding as I was tying my hair with both hands, Shern immediately took the paper from my mouth and he put it into his mouth. I was like..'Oops'.
And there was once where I used my foot to move his toy car aside so that people couldn't trip over it, Shern then followed me and used his foot to move his car too. Another 'Oops'.

Visit to the Paediatrician
This time we brought him to the paed for two reasons. One, is for his 2nd JE jab. Two, is because of his flu. He has been having a prolonged case of flu about a month ago after we came back from Phuket. Only two weeks after he was well, he came down wit the flu again.

Dr. Chiah said it must be a different virus. Anyhow, I feel that I am becoming more of a home-paed myself for Shern as I now know all the names of the common medicine like Piriton, Polaramine, Paracetamol, Mucosolvan, etc. :)

This visit shows no weight gain from last month. It is considered a very good weight with his flu and all. And we did not measure his height that day. Next month, we will do so.

Taking Shern to visit the paed is very pleasant now. He is happy when I tell him 'we go see doctor' and he would say 'aiii...' Shern likes to play with the toys on Dr. Chiah's table. And he does not make a fuss when doc uses his stethoscope on him, and even opens his mouth for doctor to see his throat.
And the visit always ends with Shern saying 'bye' to Dr. Chiah, waving his hands and giving him a flying kiss!
Posted by tanshuyin at 3/29/2011 12:03:00 PM

he's growing so fast... i would stop time to keep him close... oh well, how selfish i am :P

Jamie....haha. I know I shd appreciate the closeness we have now. Coz SOON, he will only have time for his gf and no time for mummy! :P

Yin, I also have a cold and cough after back from Phuket... I was coughing for 3 weeks and on & off flu..currently no more coughing but still got runny nose start again... :( what virus is it ah...

wen...doc nv say wat virus la. virus got so many types i think he also dunno. he juz said it must be a different virus. ;)