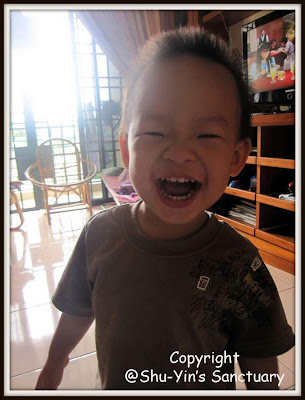 Took Shern to see Dr. Chiah for his 18-month-old booster jab.
We waited for more than an hour this time and Shern was getting restless. But the moment we went inside the paed room, he was excited to see all the toys on the doctor's table.

I knew from experience that I have to ask Dr. Chiah all questions and concerns before his jab, because once Shern started howling, we would have to leave immediately.

And that was when I told Dr. Chiah about my concerns with Shern's speech. Up until now, Shern could only say 'mumm-mumm' and 'aii.....' clearly and consistently. But I also told the doc that he could understand us by showing various actions and pointing at things.
Doc says this shows that Shern's hearing is fine and he can process things with his mind. But then he may be having some speech-language delay.

He said that this is still not the worry stage yet as Shern is only 18 months old. But early intervention is good to see what we as parents can help the child. I could see his point and he then referred us to a Speech Therapist outside of GMC.

Then it was time for the booster jab. Distracting Shern with toys, Shern did not even cry! He did whimper a little but it was over so soon that he forgot all about it. He was really a good boy!
After hearing from a friend that this jab could lead to fever and uneasiness to the child, I asked Dr. Chiah about it. He said that the percentage of getting a fever with this jab is not high - only 1 in 20. (This is a low percentage because his earlier jab percentage was 1 in 5).

Shern then fell asleep in the car on the way back home. And during the car ride, I was thinking and toiling the idea of early intervention. Then I knew I was determined to do all I can in helping Shern. But first, I want to learn all about speech-language delay. And the best way to learn is 'thru google.

I have been a "silent" reader of your blog every since Shern was born :) My little girl was born around the same time as Shern, about 2 weeks earlier only :)

Shern is such a happy, cheeky little boy so don't worry too much about his speech, as all babies develop differently, and it is quite common for boys to be slower in talking. I'm sure once he starts, he won't be able to stop! :)

Thanks for following my blog. And I am glad that my silent reader is speaking up now! ;)

And anyway, thanks so much for the encouragement! :)

I thank god everyday for search engines too. Heheheheh....dunno what I'd do without them.

life is so much easier by googling....u can find all the answers thru there!