It was my all our first time stepping into Penang Turf Club.
We were happy that even the car parking was free for this Penang Turf Club Expo 17-19 Dec 2010. Entrance was also free. So really best time to go with the whole family all in tow.

At the entrance, we were greeted by horses in their stables. 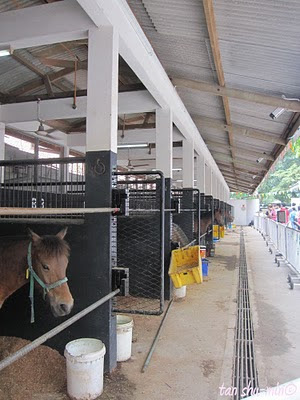 It was really smelly actually, and you couldn't help but to pinch your noses when you got near. But once you stepped in, you are immune to the smell and you get to see horses of various breeds. 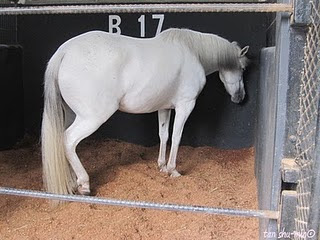 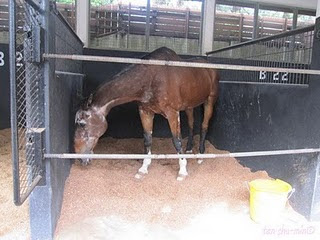 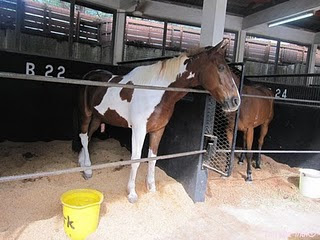 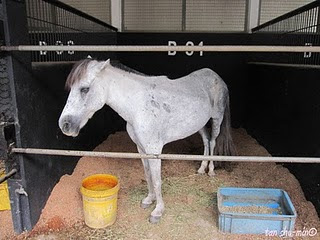 Shern was very excited to see the horses. He kept on pointing at them. 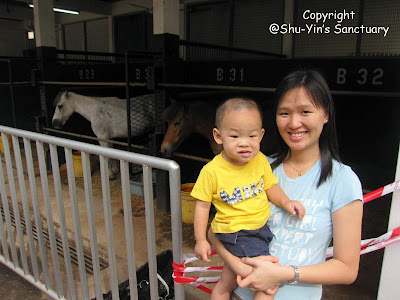 19 December 2010
After the horses, you pass through the gate which will then lead you to the expo. First impression was that it was so carnival-like, with many booths and loud music blaring on the speakers. 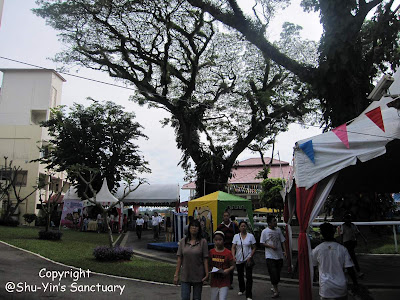 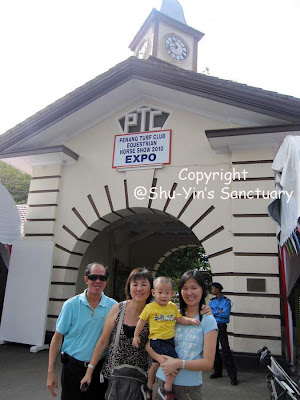 There was a farriery demonstartion, whatever that is. But you can see people going something with the horse shoes, making them I suppose. 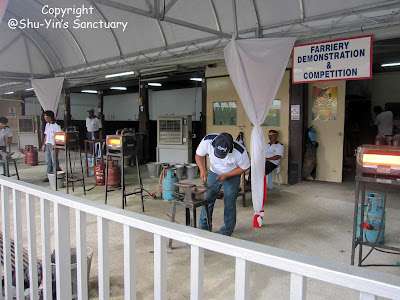 And there were several art booths such as Sand Arts Corner and Face & Hand Painting Booth. 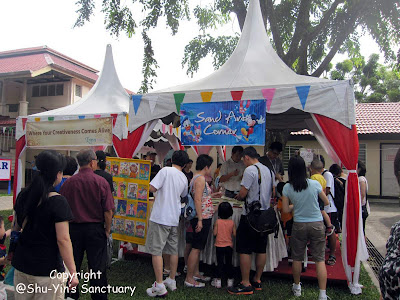 There was even a snake charmer in the programme. I took Shern to see the snake but he was not interested because the snake was not moving much. 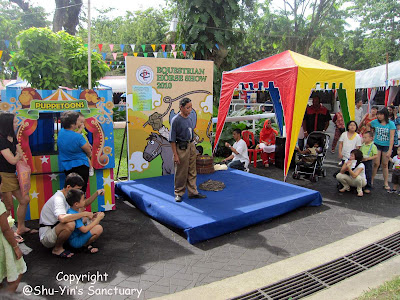 There were also jugglers and they were juggling fire torches too. 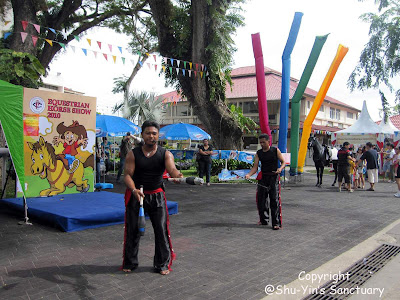 Unfortunately, there were no horse rides, just a big horse for children below 8 to sit on it to take photos. It was too high for me to heave Shern up. And Shern kept on signing to me that the horse is sleeping because of its eyes being close. Haha. 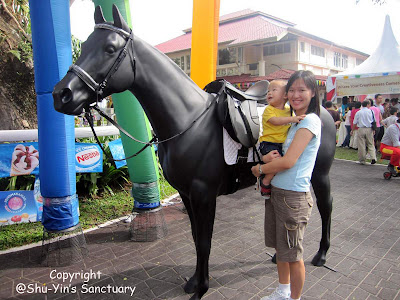 But there was a pony ride somewhere I think.

And in this photo, Shern was crying. I do not know why. I don't think he was afraid of the clowns because he just high-fived to them a minute before this photo. 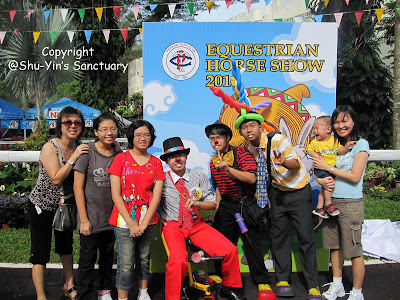 We saw this tall-man on stilts walking past but Shern was still crying. 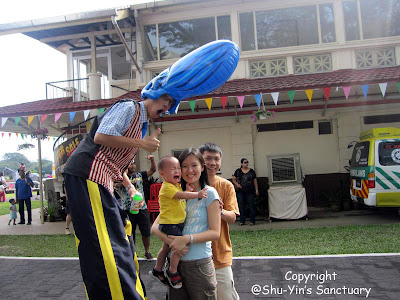 He would not stop crying until I gave in and bought him a drink. Finally, his crying stops. 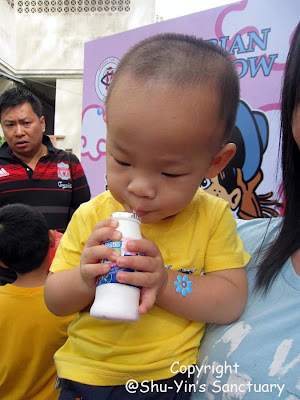 Look at him still drinking happily while taking photos. 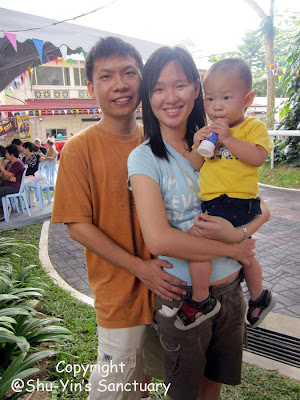 My cousins and Min had their hands painted. RM3-4 for a hand, cheap huh? I like Min's butterfly the best. It is the one on the right. So artistic looking. 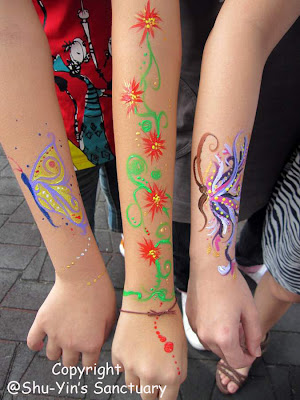 While waiting for them to get their hands painted, Shern enjoyed himself walking on the soft grass... 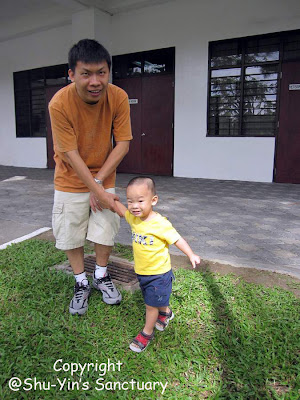 ...and shaking his bon-bon to the blaring music. 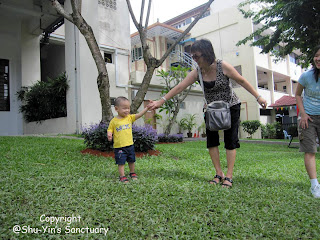 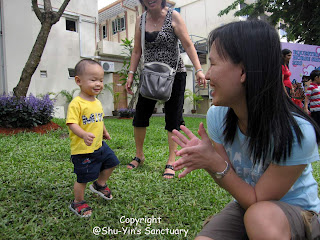 Luckily, it was quite a cloudy day. But there were ample trees there to provide us shade. Love the trees there. 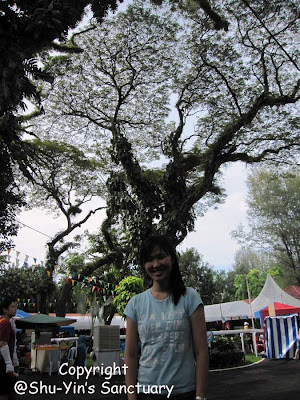 Then we walked to the equestrian area. Beautiful. 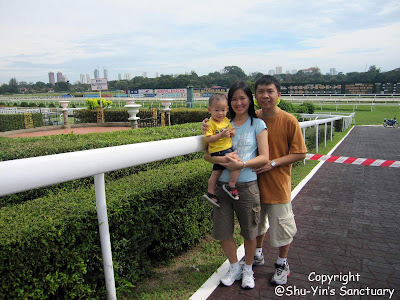 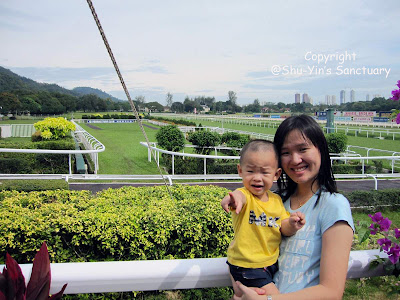 Many people were crowding to watch the Flying Phoenix Ride, you know the type that cowboys ride? 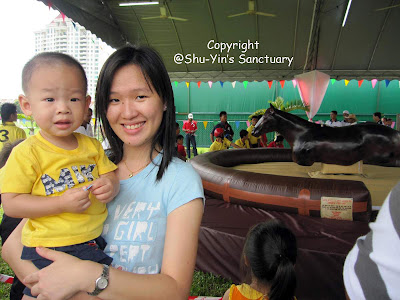 And guess what? Hubby had a try at it too. It's free btw.
This is a video Min took of him but too bad only captured the front part before it was out of memory.
But hubby lasted 32 seconds before he was thrown off the horse - which was the longest among the non-professionals. Not bad, huh?
Then we walked over the other side which was the Bazaar. There were mostly handicrafts for sale. There was one stall which was selling train sets and Shern was hooked on it. I practically had to pull him away from the stall.

We then went home. Shern was reluctant to leave. He wanted more. 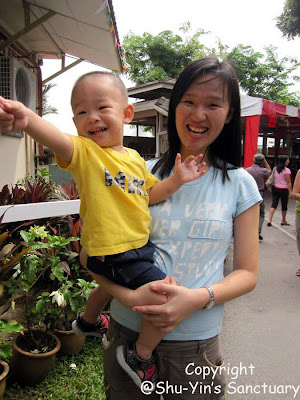 we brought caris there too. she was all excited for horse (must be thinking it's the queensbay merry go round horse) but she got so scared seeing the real ones.

haha. i think caris is big enough to be scared. shern doesnt even understand if we tell him horses bite! haha