I finally booked myself for the Danai Spa treatment today @ G-Hotel.

I actually received this Danai Spa voucher from ChiaoJu on my birthday, which was in January. And to think that I only used this today...after 11 whole months! 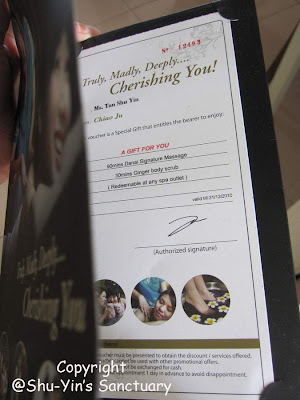 90 minutes Danai Signature Massage
30 minutes Ginger body scrub
Initially I wanted to go for the one in Copthorne Hotel, which is nearer to my home. But when I called the number to make an appointment, I was told that it has already closed down.
The next nearest Danai Spa would be the one in Tanjung Bungah, which is opposite the Tanjung Bungah Hotel.

I decided not to go for that one because although I had read raving, good reviews about that spa venue, I also read that the bath or jacuzzi is outdoor. I cannot imagine myself soaking in the warm bath in our hot climate!
So I chose the outlet in G-Hotel.

I drove myself to G-Hotel in time for the 1pm appointment. Saw this huge Christmas Tree in the lobby. 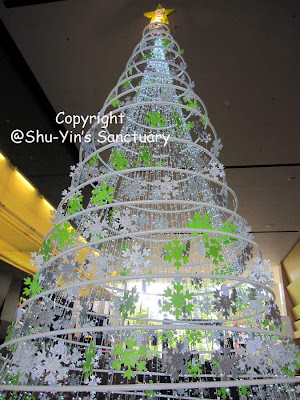 Took the lift up to the 3rd floor, where the swimming pool and gym and all the other beauty salons are located. 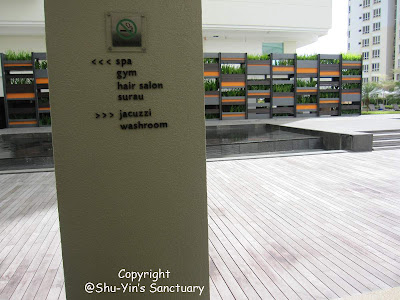 Found the Danai Spa just next to the gym. 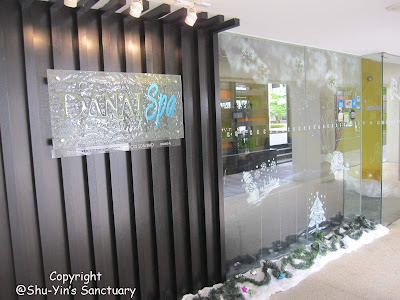 The reception place is so Christmas-y! It looks so festive! There are balloons, snow deco, Christmas tree, snowflakes, and Christmas stockings everywhere. I felt happy just being there. 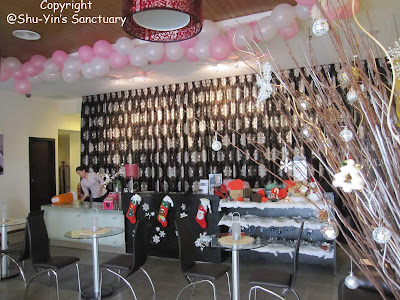 I was then offerred a cup of warm ginger tea. It made me feel warm all inside. I think am beginning to love the taste of ginger.Then I filled in a form asking for some particulars, such as my skin sensitivity and how would I prefer my massage pressure to be, whether light, medium or hard. 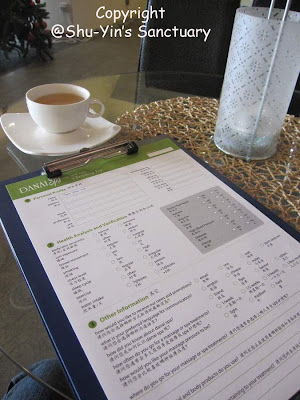 A 30-something-year-old, rather plump lady then led me to the hallway into my room. The lady turned out to be the masseuse or the massage therapist. 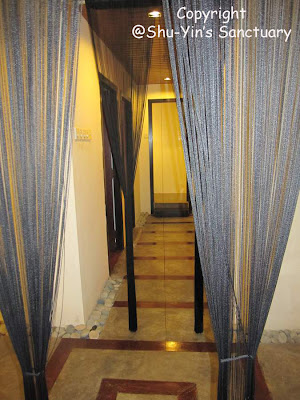 This is the room. A massage bed, a jacuzzi bath tub and a transparent rain shower screen(hidden in the photo). 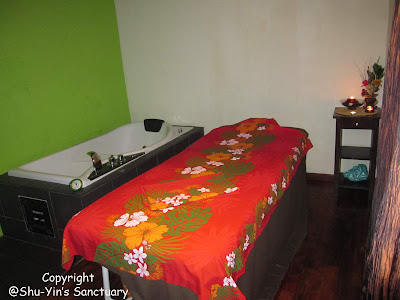 I was then given a disposable panty and a wrap to change.
The panty was a free size I guess, and I found it a little too big for me. 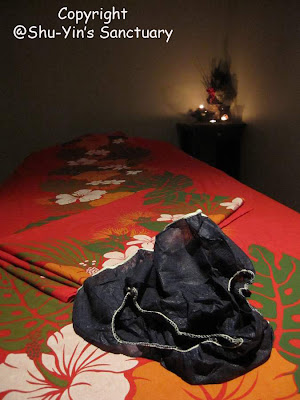 So, how did it all go?
First, it started with the Danai Signature Massage. The masseuse was either good, or maybe I did not know how to really rate a good massage therapist. But she really knows where to put pressure on, and her massage pressure on me was just nice. Gentle, yet strong.

I nearly dozed off. And I usually don't doze off like that. (Unlike hubby who will doze off in front of the tv). It was that good. And before I realized, 90 minutes went by. It was so fast.

Then came the Ginger Body Scrub treatment. It was basically ginger and salt. When she massage it on my body initially, there was this pain. You know the pain of being rubbed raw? She literally just rubbed it all on my whole body.
But surprisingly, after a while, it felt good. Or maybe because I was thinking of 'Gosh...28 years of dead skin finally being scrubbed off my body'!

She scrubbed it on every part of my body. Except down there. And yes, even my breasts. And my fingers and toes. 20 minutes later, she told me it was all done and I got to choose to either soak myself in that tub, or take a rain shower.

I chose the rain shower. Because I felt that I could clean myself cleaner there, as I am used to shower this way. And I love the feeling of hot water pelting on my body.

When I shower, I could feel a thick layer of massage oil on my body. I used almost 1/4 of the shower gel to yank the oil off. I hate oily feeling on my skin.
When I emerged from the shower, I felt like a different person.

My skin became smoother. It's true. And I felt more refresh and relax. 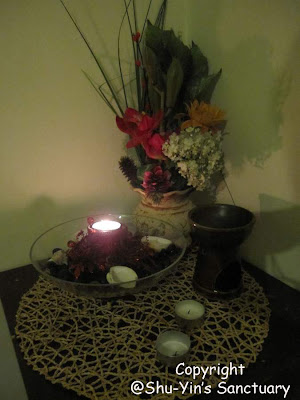 Will I go back?
I guess I am reluctant to spend so much on myself. I could feel guilty. But other than that, it was truly a great 2 hours of my life.

Email ThisBlogThis!Share to TwitterShare to FacebookShare to Pinterest
Labels: Luxuries and Vanity

=) u are most welcome. glad u enjoyed it. it wasn't THAT much. got some discounts here and there. after a year and a half being a full time mummy, it's good to go out and pamper urself a little. =) it was nice seeing u the other day. take care and see u soon!

oh and thanks for ur gifts! =) enjoyed the book. those kids are really really cute.

chiaoju...when i saw this book, i knew i had to give it to u. i knew the book would somehow bring a smile to ur face whenever u r down! ;)

Reading about your spa experience made me want to go to a spa myself. I went to a spa with a friend once, and we had a very relaxing time. It was a great way to spend our day off and pamper ourselves after working so hard. We left the place feeling rejuvenated and refreshed. It was awesome...

Thanks for visiting my blog. :)