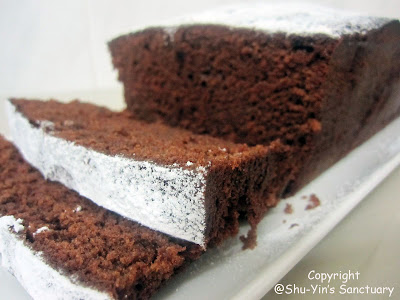 1 Oct 2010
The moment I saw this Double Brilliant post on my bloglist by The Kitchen Sink Recipes, I knew it would be a winner. Well, I can't resist any bakes that combines chocolate and bananas together.

And I immediately brought out my SCS butter from the fridge to soften it to room temp. I knew that I was going to bake it today since I have some over-ripen bananas hanging in my kitchen.

One thing though, I don't have any Dutch-processes Cocoa Powder. So what did I do? I substituted it with Hershey's Natural Unsweetened Cocoa Powder.
Although there is this substitution table (above), I did not follow it. I just simply chucked in the equal amount of unsweetened cocoa powder. I know, Dutch's is supposed to have a more superior taste, but well, I am lazy. Maybe next time. *wink

And as I don't have sour cream, I subbed it with Nestle's natural yogurt.

What I like about this loaf is that while baking in the oven, you can see that the batter rose surpass the brim of my loaf pan. Wow, not often do I see this. It rose real high and real nice!
Even while cooling on the wire rack, it did not disappoint me, it kept its height and was still standing tall. 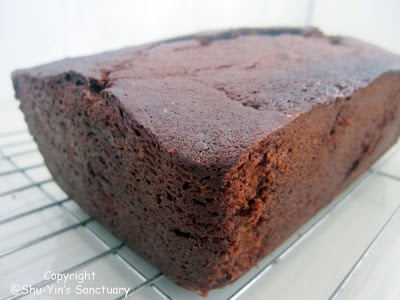 I dusted some icing sugar on the loaf, liking that the powdered white sugar gave a nice colour contrast to the dark loaf. 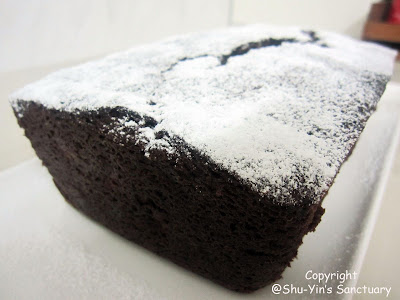 For me and my family is alright. We like chocolate and we love bitter chocolate taste. ;) 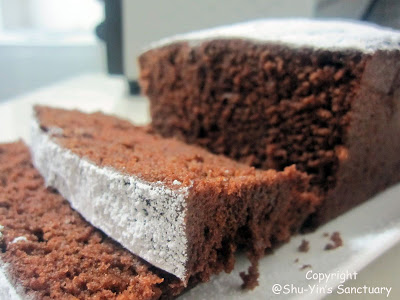 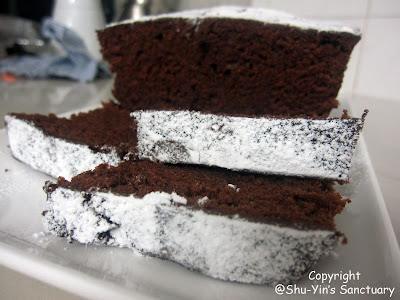 Combine the flour, cocoa, baking soda, and salt in a mixing bowl and stir well to mix. In a separate bowl, stir together the mashed bananas and sour cream; set aside.

Combine the butter, sugar, and brown sugar in the bowl of an electric mixer and place on mixer fitted with the paddle attachment. Beat on medium speed for about a minute, or until well mixed and a little lightened in color. Beat in the eggs one at a time, beating smooth after each addition.

Spoon the batter into the prepared loaf pan. Bake for 55 to 65 minutes, until the loaf is well-risen and firm to the touch. Test the loaf with a toothpick or the point if a thin-bladed knife – it should emerge with just a few moist crumbs clinging to it. Cool the loaf in the pan on a rack.

Once the loaf is cool, turn it out onto a board or serving plate. Dust with powdered sugar, if desired.