Standing A Foot Away from Raymond Lam Fung

I considered myself not a serious celebrity fan. I don't go to their concerts. I don't buy their posters or CDs, etc. Well, all that was yesterday. Because today, I went all the way to QBM and braved the crowd to catch a glimpse of Raymond Lam Fung at his Alicafe Promo! Aishehh...first time I did this kind of thing! 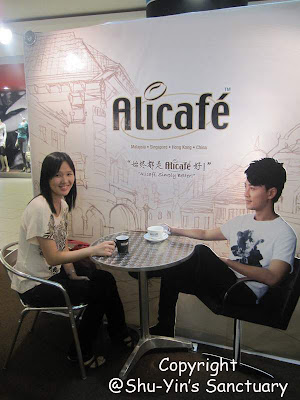 me and Cardboard Ray having a cuppa
In order to get a chance to get his autograph, I bought 2 packets of Alicafe Coffee which cost less than RM20. And thank goodness, I got a white ball in the lucky draw which means I won myself a voucher to go up on stage to receive his autograph. 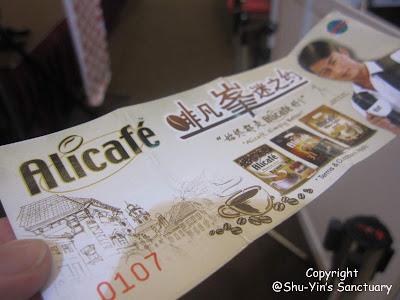 My voucher to receive his autograph
Since I already had the voucher, I decided to be there bright and early to queue up. Raymond Lam's appearance was at 8pm and I was queuing there since 5.35pm. Shit...I was standing there for 3 freaking hours while watching the crowd grew. There were like a few thousand fans there.

Hubby who was not as crazy as me to queue there since 5.30pm went to Borders first and promised to return at 7.30pm so that he could help me take a photo when I go on stage to get his autograph. Needless to say, by the time he came, there were so many people that he could not reach me! 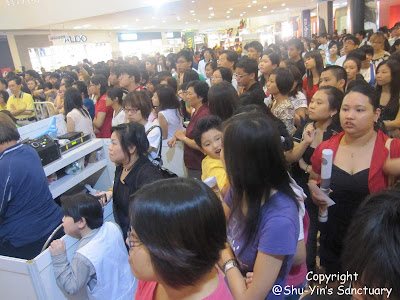 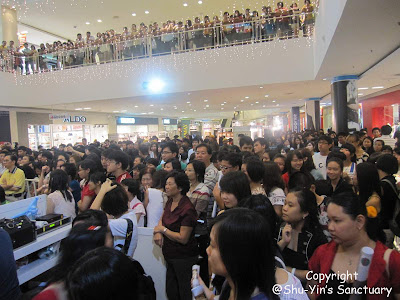 He appeared at around 8.15pm. Gosh...he looks way more handsome in person. My photos were all blur, thanks to my point-and-shoot cam but I managed to take a short 8 secs video of him when he first appeared before me.

But standing there 3 hours, with my legs so tired was worth it because I was FIRST IN LINE queuing for his autograph. Haha. Yea....FIRST IN LINE just like one the die-hard fans! But in the end, there were 2 people in front of me who came out of nowhere! Isshhhh

So what did I get?
I got to stand just ONE FOOT AWAY from Raymond Lam and HE NODDED HIS HEAD AND SAID 'THANK YOU' TO ME!
Hahahaha. That made it all worthwhile. I totally forgot that my legs were tired and that I was actually holding my pee. :P

And of course I got this limited edition Alicafe recycled bag signed by him on the spot. 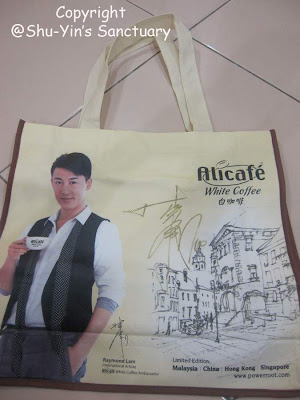 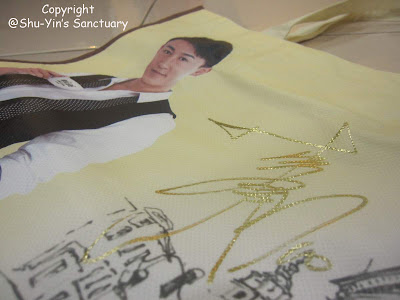 Well, straight after receiving the autograph, I walked away and went to pee......:)

LOL respect! how come u din ajak eelyn, she is his number1 fan! :P

eelyn was there also la. haha. but she nv buy the alicafe so didnt get his autograph. she also stood there for 3 hrs. hehe!
eh...y u nv go ar?

i salute you for standing 3 hours there straight...once he come, i dissapear dee..just want to see him in real person because always watch his movie..he is just one plain looking guy to me..damn tired for like standing for 1 hour..wanting to share you with my fries but i can't reach you after i came back from buying mc d...hehe but i saw you giong upstair to get the recycle bag cause i ran upstairs to see him more clearly...he is cute..his family is very rich and his brother all are business man including the father and he is the youngest and very humble...

hahah ok no surprise eelyn was there then :P but how come she din buy? to have him smiling up at her, i think she'll swoon on the spot hahha..

noler, i din know what time he was going to be there. i was at qb for lunch and i figured he was going to make an appearance, with the stage and all, but din see any time stated on the posters..well, too bad :P

my...yalor. duno why she nv buy. mebbe coz she seen him b4 dee mah so many times. even went to his concert b4.

at 1st i also tot dowanna go see him dee coz Fri damn jam ma. but then hor hubby said this 'if u go HKG also wont get to see him, sumore he now come to Pg and u get to see him for practically FREE...'.
so i tot hanor hor...better go! haha. im glad i went!

lol. i couldnt help thinking would be so funny if one of the 2 ppl who suddenly came in front of you out of nowhere is eelyn!!

shuey..haha. noler. eelyn was on the other side of the stage. we were bz sms-ing away while queueing up waiting for lamfung to com ;)

shuey...u surprised boh i do this kinda thing...queuing for 3 hrs juz to get his autograph. it's like smtg eelyn will do and not me. im rather surprised at myself also. :)

umm.... i wasn't surprised. i know there are ppl who do these things, so any one of us has potential to wait for hours for something we care about. i can't think of anything at the moment, but there must be at least once when i've waited for something i thot was worth it....

when iphone4 was released, people queued up from before 6pm to midnight IN COLD MELBOURNE WINTER waiting for Telstra/Optus to open so they could be the first ones to buy the phone! i was passing through city on way home, and was surprised to see queues THREE BLOCKS long! so i went to ask the first person in line how long he's been there, and was shocked, so i asked if there was a promotion or sale or what benefit for queuing so long... he said none. just to buy it.

i find the queue to buy iphone much harder to believe.

hehe..ppl in msia also queued up very long to buy iphone4. not sure if it is 3 blocks long but is long!

well, i'm not really a die-hard lamfung fan. juz like him more than the other actors. haha.
but after seeing him so close...i totally forgot bout my 3 hours queuing.
and since it is practically free, kinda worth it la i think. hehe

i actually dont mind lamfung as an actor too, so wouldn't mind hanging about to have a peak at how he's like in person too. ;-)

i dont know how lamfung is like in person although i queued up for 3 hrs juz to have a peek at him. i mean, i dunno if he is a rude bastard or a nice gentleman.

so i guess i still dont know lamfung in person! ;)

sometimes can tell from body language and general demeanor. but u're right it is difficult to tell how a person truly is. sometimes u can know them for years and still get it wrong.

haha. but can i safely say that i KINDA know how soohuey is like in person? ;)

and i think u KINDA know how shu-yin is like in person!