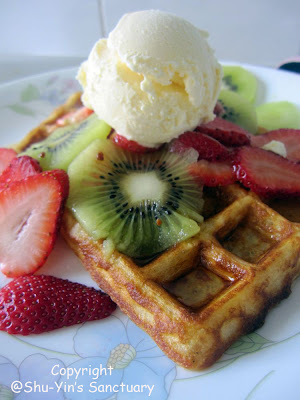 Waffles - 5 Oct 2010
I saw this 'Waffles of Insane Greatness' being titled in one of the post in Julie's blog, and was intrigued by the title, so I looked at the recipe.
This recipe is simple, with no beating of egg whites or things like that. And also it calls for corn flour to be added into the batter, which I find interesting.

And I recently bought a Kenwood waffle maker and this was a chance to use it. I followed the recipe to make the waffle batter the poured it into the maker.
It yields 5 crispy and fluffy waffles. Crispy on the outside and fluffy on the inside.

I cut some fresh strawberries and kiwi fruits to add to my plate of waffles. 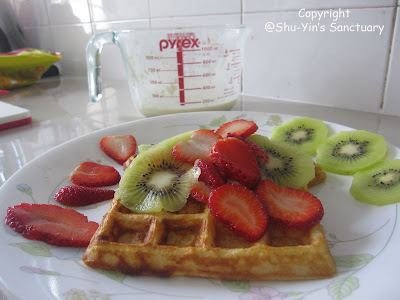 Drizzled some honey on it. 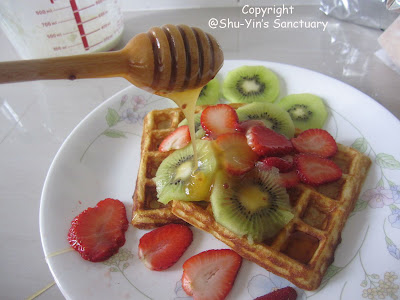 And lastly topped it with a scoop of vanilla ice-cream. And this was my breakfast. 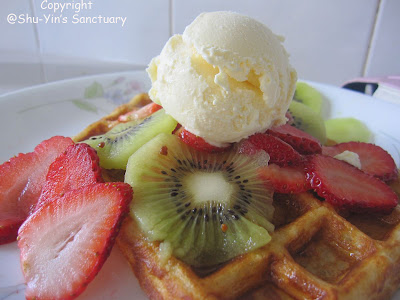 This is hubby's plate. 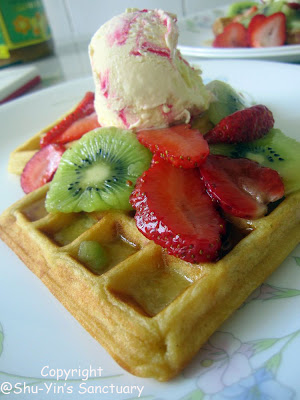 One thing though. My Kenwood waffle maker takes so slow to make 2 waffles. Almost 15 minutes waiting time.
If I am to make waffles for my whole family of 7 people including Shern, it would take me 1 hour and 45 minutes assuming that each person takes 2 pieces.
Aiks...forget it! I am not making waffles for the whole family. (Min...u read this? :P)

Adapted from Food Network by way of Orangette.

In a bowl, whisk together the flour, cornstarch, sugar, baking powder, baking soda, and salt. Add the milk, oil, egg and vanilla and mix well. Let the batter sit for 30 minutes.

Preheat a waffle iron but don’t spray it with nonstick spray; the oil in the batter will allow the waffle to release easily. Cook them according to the waffle maker’s directions, and serve warm. Makes about 6 waffles. (I got 5 out of it)

Yaiks!!! 15 mins for each batch of waffles??? That's so long.
I've seen other waffle makers taking much lesser time. I'm not going to get a Kenwood waffle maker after this for sure.

yes...it took like FOREVER.
i dont think I'm exaggerating. Minimum also it took 10 minutes and that was when i put less batter in it, hoping to get a faster waffle for my hungry stomach.

if i knew, i wouldnt buy it too. but i got mine cheap. rm100 or so, so i guess cheap things are like this sometimes. sigh..

But your pic here sure look delicious....slurpssss

although the kenwood waffle maker so lousy..took so long, but the waffles churned out are good and tasty. so ok also la!