Yes, my boy has cut his hair seven times since birth, if I counted correctly.
It is not that I do not want to let his hair grow. It is just that his hair is so stiff and hard that when it grows, it grows up, all the way standing up!

I'd tried letting it grew longer and the result was still the same. Standing up!
Even when he was a few months old, his hair was already so stubborn. Look at his hair 1 year ago! 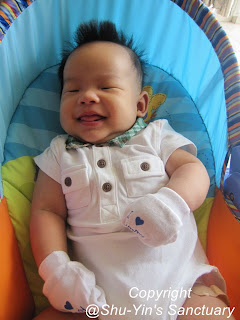 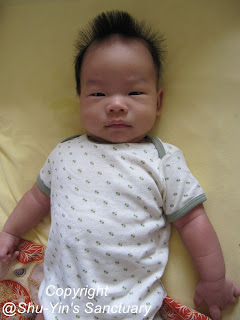 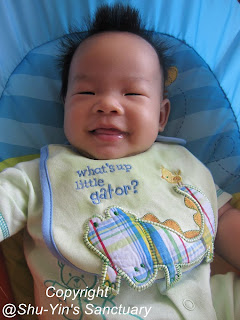 week 18
So now we cut his hair every two months or so, when his hairs near his ears grew so long that it poke his ears and he kept using his hands trying to keep them away.

So how does Shern looks like now? Hehe....back to botak again.
And thinner, and more active than ever! 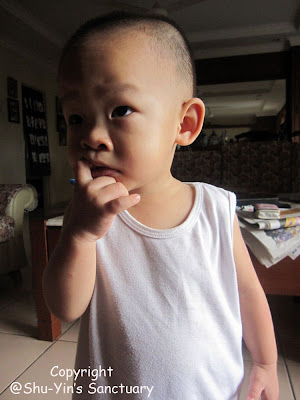 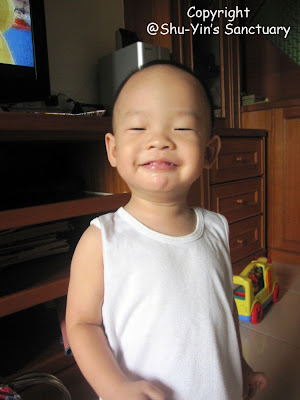 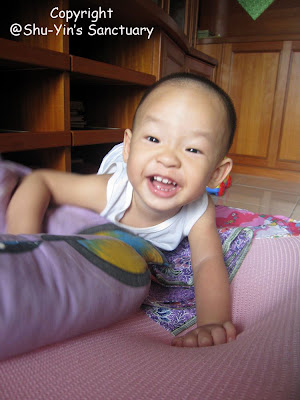 Look at the last photo. Shern was climbing up his bouncer and wanted to bounce himself in it standing up. He can't even walk properly and he now wants to bounce himself in it. He showed me his cheeky smile before doing it because he knows that this act is forbidden.
Arrghh....what a naughty and active toddler he is!

Anyway, Shern was screaming the whole hair saloon down while the lady was shaving his head. He was terrified of her and was even more terrified of the loud hair dryer sound nearby.

The moment we stepped out of the saloon, he stopped crying.
I am now the one who is scared whenever it is Shern's hair cutting time.
Thank goodness the next one is about two months away!
Posted by tanshuyin at 10/05/2010 11:45:00 PM