Shern and the TV

At 6 months old, I blogged about Shern being a TV Addict.
Now at 16 months, Shern is still a TV Addict. A cleverer one in fact.

He loves watching cartoons or any shows with lively songs such as Barney or Nursery Rhymes DVDs. And he even loves Thomas the Tank Engine DVD (which we found boring with just the narrator telling the story!).

The other day, Min & I wanted to re-watch Lion King (which we had watched 100 times or more) and Shern actually sat down and watched it with us for quite some time.

He climbed up the sofa in mum's house and settled comfortably watching Lion King. 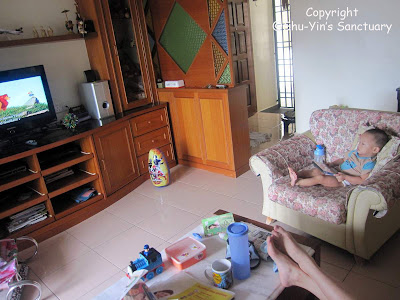 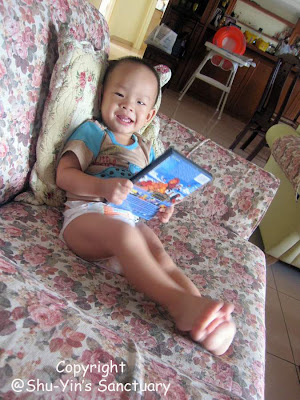 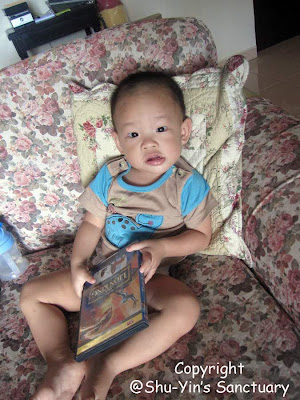 Look at my baby watching the cartoon so intently - so focused on the TV screen. He was excited when he saw the animals in there - birds, monkeys, elephants and lions.

Although I've read that toddlers below 2 years old are not encouraged to watch TV, I did not adhere strictly on this. As long as Shern don't sit in front of the TV 24 hours a day, I am fine with it.

An hour or so of TV a day can do Shern no harm. After all, he will not sit and watch for an hour straight. After a few 10 minutes or so, he will just climb down the sofa and play with his toys. And when he hears music coming from the TV, he would turn and watch and dance with the music occasionally. When dialog time, he would turn away again and continue playing with his toys.

And I find sometimes these cartoons are educational too. Shern learns about animals from The Lion King.
Shern learns how to follow their actions of clapping hands, stamping feet and etc from the Nursery Rhymes DVD.
As for Barney's DVD, he learns a lot too. So not that bad letting Shern watch the appropriate show material! 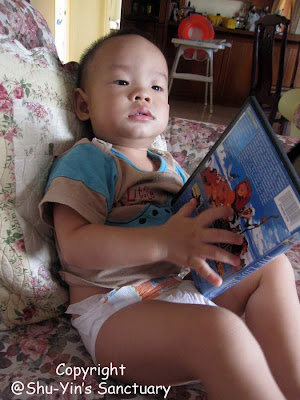 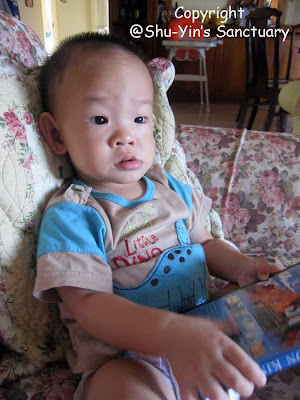 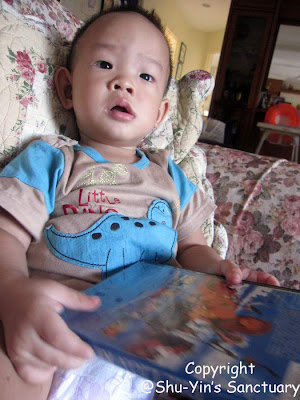 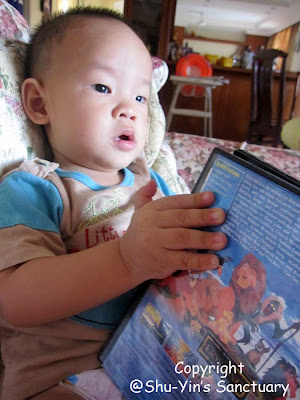 TV gets people in the habit of sitting in one place and starring... while mind-numbingly "downloading" activity flickering on a screen. even the very best movie or documentary allows very little space for own thought during the movie/doco. if a person isn't used to thinking, they wouldn't even think about the context of the movie/doco afterwards.

additionally, unlike a book or real-life experiences, TV doesn't allow intimate relation or understanding between viewer and characters/issues on the screen. not having that level of connection means the child's ability to grasp depth and subtleties becomes limited. that is how we get a generation of mindless superficial kids.

forming the habit or getting used to or attracted to learning from the TV as a young child is detrimental to his/her potential in many ways. lack of physical movement and exploration is least of the problem.

young children shouldn't watch TV because they first need to learn other ways of exploring and learning. if they develop a liking or desensitization to TV at a young age, then all is lost for trying to move them away from it later... And if they are very used to it, they may not like to think for themselves in the future because TV simply GIVES the thought to you. In general (despite whatever is said by fans of Astro doco channels), TV makes you dumb.

since i mentioned docos, i might as well continue... i've met quite a few people who are for some reason proud that they enjoy astro documentaries. but more often than not, these people are actually the dumber or more lame of people i know. just enjoying taking in the info from documentaries does not make or mean someone becomes smarter. being intelligent means being able to understand the subtleties of what is being presented, process the info within existing self knowledge, and derive wider meaning/context. the ability to do these cannot be taught by TV.

yes i agree that tv will never be as educational as books. Im juz saying that it does not much harm to allow kids to watch tv from time to time.
and i think kids learn certain things from tv too.

anyway, it is difficult not allowing kids to watch tv when the grownups watch tv the whole day. im not saying me. im juz saying in general.

im not much of a tv person. i dont even subscribe to Astro. :)