23 September 2010 - Chocolate Swiss Roll
Hubby loves Swiss Rolls. Up to date, I still have not made him one to enjoy yet. Since I was quite free today, I decided to bake one today. Came across HHB's blog which calls for a simple recipe.

I came across many obstacles while making this Swiss Roll.

First of all, I do now own a swiss roll pan/shallow pan, so I used my baking tray instead. But my baking tray has a square indent in the middle. But I just crossed my fingers and hoped it turned out alright.

This is the sponge layer just out from the oven. Just like HHB, I did not cool it in a plastic bag as stated in the recipe. I also covered it using another tray of the same size. 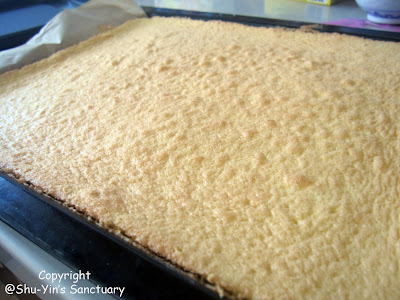 Secondly, while spreading the Nutella (chocolate hazelnut spread) on the sponge layer, I realized that I did not have enough. So what to do? I quickly melted some chopped Hershey's semi-sweet chocolate with some whipped cream to save the day.
And that is why I have 2 different colours on my sponge layer. 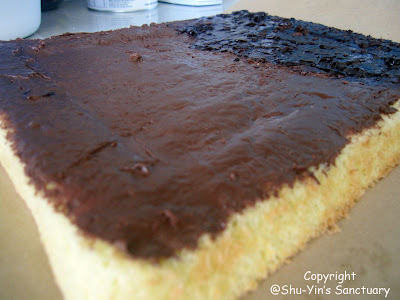 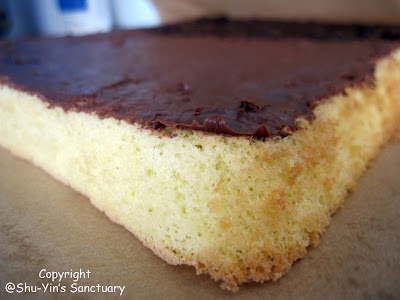 And because of the delay (I had to wait for the Hershey's chocolate spread to cool down), my sponge layer got dried and it was probably the reason why my swiss roll cracked upon rolling.

Well, it was still roll-able, but it cracked. And because it cracked, I panicked and did not roll it evenly, which explains why the middle part stuck out at the ends. Hehe.

Overall, the texture is nice. Fluffy and moist. But it has a little egg-y smell initially before I spread the chocolate spread. You can't taste the egg-y smell though.

Overall, hubby says it is good although it looks a bit pathetic, with the cracking and uneven rolling. Well, let's just say this time 'it tastes better than its look' *winks 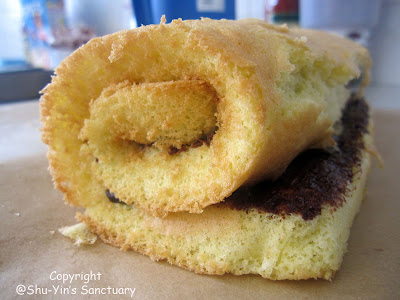 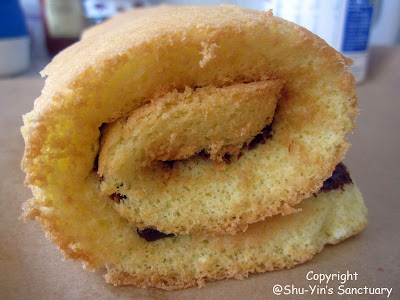 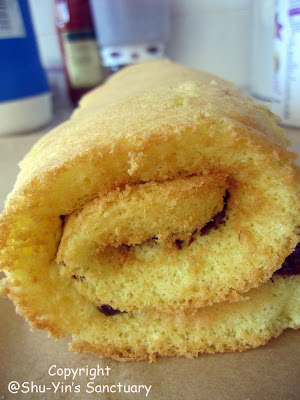 Method: NOTE:
*Do not over bake the sponge layer, otherwise it will turn dry and may crack upon rolling.
** The reason for doing so is to keep the sponge layer moist for easy rolling.
Posted by tanshuyin at 9/23/2010 01:48:00 PM

this is not a very successful swiss roll. it cracked, remember?
but then taste-wise not bad la. nothing can go very wrong with nutella :D