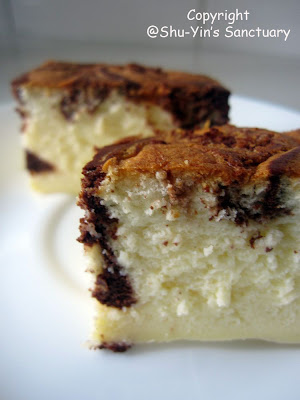 I wasted 6 eggs. Wasted 250g Philadelphia cream cheese. Wasted some flour, sugar, my precious Wilton's pure vanilla extract, milk, cocoa powder and cream of tartar.
Sigh....all because I had to make the same cake for three times before it is edible!

Yes...you heard me right. The first two times were not only failures but they were inedible! So what actually happened?

Was feeling very upbeat because I saw this lovely featherlight cheesecake photo and recipe from Wendy's Table for 2. Bought some pre-packed Philadelphia cream cheese from Bonjour to try out the recipe.
I made the stupid mistake of using a loose bottom pan when the recipe required it to be baked using water bath method. I thought covering the bottom using thick aluminum foil was enough to protect the water seeping into my pan, but I was so, so, so wrong!

So although the top part of the cake was OK, the bottom part was all soggy due to water seeping through the foil into my pan! ;(
And in order not to waste the cake, I thought of cutting it in half and consume the top layer of the cake since the bottom layer was soggy. But after leaving it in the pan for awhile, the cake soaked up all the water and even the top part became soggy(sorry, forgot to take pic). So wasted the whole cake! 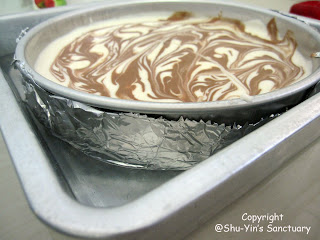 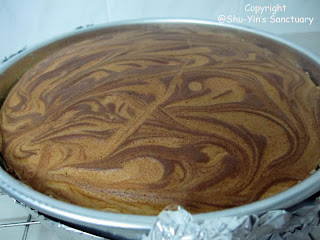 After a failed bake, I wanted to try baking it again. So another midnight bake. This time I used a normal 9" round baking pan (because I don't have 8" square baking pan) to make sure water don't seep through my pan again. 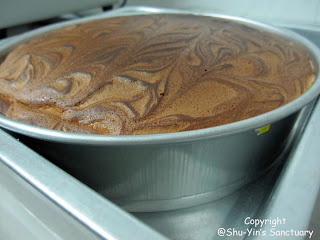 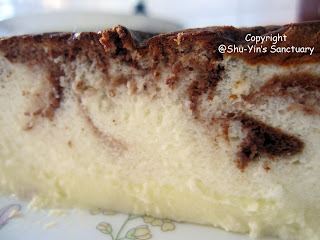 I was so frustrated by my 2 failed attempt that I decided to bake it the third time the very next day. I told myself that if this time I fail again, I will never, ever going to bake this cake using this recipe again!

I was preparing the batter for the 3rd time by practically closing my eyes because I have all the steps and ingredients memorized!
My batter and marbled pattern look nice! 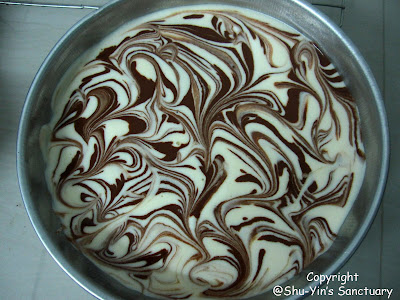 3rd edible attempt
This time, I increased the temperature to 160 degree C (recipe says 150 or 160 degree C) because I planned to put my cake on the lowest rack of my oven so that the top part will not be browned so fast like what happened on my 2nd attempt.

The result of the 10 degree C temperature increase was a cracked top! But I was still feeling optimistic for as long as the cake was edible! 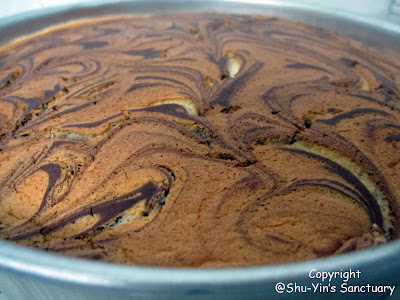 After leaving the cake in the fridge overnight, the next morning, I excitedly released the cake from the pan (tricky business because the cake was so fragile!).
I was so happy to see the texture of the cake!
No more soggy, under-baked cake! Hehehe 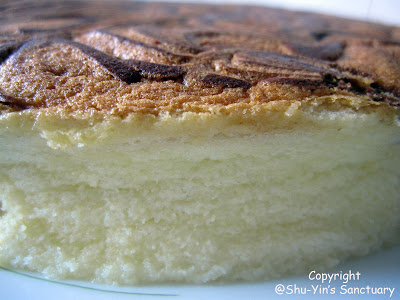 Although not as featherlight and airy as Wendy's, it was edible and the taste was good. Not too sweet with a subtle hint of salty taste. It was not so cheesy too but you can still feel the milky-ness in it. Relatively suitable for people who don't very fancy cheesecake.

But the most bottom layer of my cake was a thin layer of dense texture. I do not know what happened. But it was OK. I was so happy that although my 3rd attempt was not a complete success, it was edible!

Next time around, if I do bake this again (I doubt so!), I am going to reduce the amount of liquid in the recipe, hoping to eliminate the thin bottom dense layer. Not sure if this will work, just a thought! 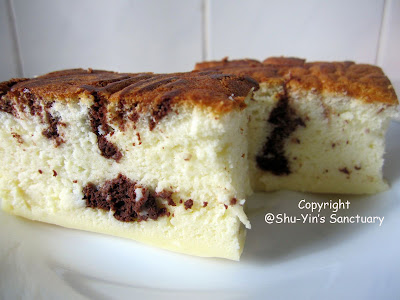 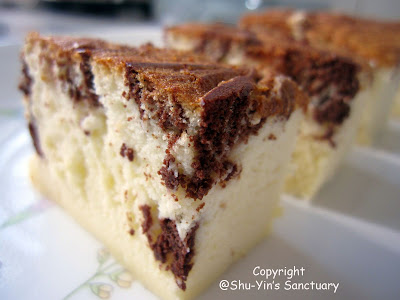 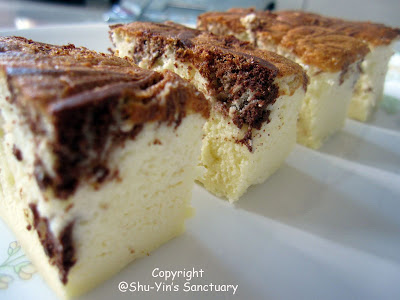 1. Line the base of a 8 inch square pan and preheat the oven at 150/160C.
2. In a medium sized bowl, cream cream cheese until smooth.
3. Bring milk and butter to a boil and pour ¼ of it into cream cheese and gently stir until incorporated. Pour in another ¼ the milk and stir again. Lastly pour in all the milk and stir until smooth. (At this point, prepare some boiling water)
4. Let the cheese mixture cool down and put in flour. Mix until smooth. Then put in egg yolks and vanilla. Mix until smooth.
5. In another clean bowl, beat egg whites until frothy. Put in salt and cream of tartar and beat until soft peaks. Put in sugar gradually and beat until stiff.
6. Put 1/3 of egg whites into cheese mixture and fold gently but quickly.
7. Pour the cheese mixture into the egg whites and fold until well incorporated.
8. Mix cocoa powder with boiling water until smooth. Put in a few tablespoons of the cheese batter and mix until a smooth chocolatey batter is formed.
9. Pour main cheese batter into prepared pan. Drizzle chocolate batter over main cheese batter.
10. Use a knife and cut through the batter to create a marbling effect.
11. Put pan into slightly bigger but shallower pan. Fill the bigger pan with boiling water until halfway up and bake for 50-60 minutes.
12. When cake is baked, remove from oven and release the sides of the cake from the pan immediately by running a knife between the sides of the cake and the pan. Leave it to cool down totally and chill until cold before cutting.
(Please note that this cake is very fragile and must be handled very gently with much care)

Hi Shu-Yin,
What a coincidence! We made the same cake at the same time with a failure experience. :)
Thumb-up for your effort!
Yours looks soft & well baked with pretty swirls too ;)

Hie, DG, welcome to my blog ;)
My cake is not as fluffy and airy as I like it to be. And it had a thin layer of dense cake at the bottom, i wonder why. Do you know why?

But I am still glad that it is at least edible being the 3rd try :)

Hi Shu-Yin,
Sorry, I don't know how to answer this. But I just noticed it that my step in between "after pouring the flour" is a bit different to yours.
And one of my reader felt that the amount of water required look "unnormal" :), so maybe this is the reason that this cake is a bit hard to handle.

Hie DG...
but I'm very impressed Wendy's cake turned up so fluffy and airy!
So it must be me ..being an amateur cake-baker I am :)

Oh, I just saw this now.
If you ever bake from my blog hoh, use the 2nd temperature. As the first is for convection ovens and 2nd temp is for conventional ovens. Is it stated in my "about" about baking temperatures, but then again, every oven is different, u have to know you oven well.

My cake cracked as well. My cakes always cracks, but then, it's better than having an uncooked cake.

If your oven comes with top and bottom heating elements, always bake cakes in waterbath on the lower rack. I hope you didn't wait too long before you baked as it could cause the dense layer at the bottom due to the batter deflating. And how well you fold the batter will affect the texture too.
Practice makes perfect
I'm sure you'll be able to make a much much better cake next time around.

wendy...yes, i also prefer cracked cakes than underbaked ones.
i did not wait too long to bake the cake. the cake went into the oven immediately once the batter was made. i guess my folding skills fail that is y i have bottom dense layer in my cake. haha.
thanks for the tip though.

Shu Yin, I normally bake my cakes with loosely covered aluminium foil to avoid burning the top. Try it. It helps. Happy baking! I do enjoy baking as much as you do. I try to bake on every alternate days. Cheers, Jennifer.

Jennifer, yes I know. I do that too. Just that I didnt know that the top will burn when the first time didnt. Guess increasing temp by 10 degree celcius makes a lot of difference.