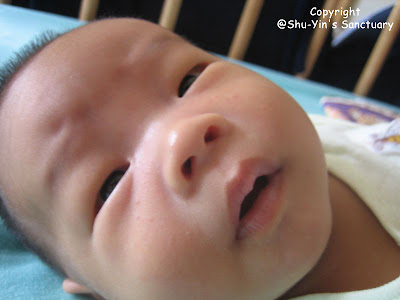 Haircut
Shern started off week 9 with a crew cut. He looks so much like his daddy after his haircut. And he looks so much chubbier.
His little bump on the left of his head is still there but not so obvious now.
His yee-pho calls him 'Kong Tau Chai' now. ;)

Breastfeeding
He now wants people to carry him while he takes his bottle of EBM. Sometimes though he will just drink happily lying on his cot. It all depends on his mood.

Pediatrician Visit
Went to see Dr. Dan on Thursday as it is Shern's 2 months. Shern was behaving like an angel the whole time, cooing and smiling, and did make noise at all.
When I was asked to remove Shern's Mamy Poko to weigh him, I found his poo all over his diapers. No wonder he was such a good boy just now - he was busy poo-ing. :P

The jab costs us RM100 - decided to take him to Island Hospital to take his jab because Island is supposedly using the new DTP vaccine in which side effects and irritability are greatly reduced in babies who received the new improved vaccine.
Dr. Dan himself told me that 90% of the babies who took this new vaccine will not have fever.

But then Shern was down with a fever that night itself. When the ear thermometer beeps at 37.7 degree celcius, I was worried. Luckily, Dr. Dan prescribed him the strawberry-flavoured liquid panadol for the just-in-case scenario. After measuring 15ml with the syringe, Shern gulped it down pretty quickly.

His fever was on and off the next day. He was so manja - wailing for me to rock and cuddle him all the time. Gosh..I was exhausted.
Fever came down soon after that. Thank goodness!

Development
He is now very kpc and he likes people to carry him in a sitting position. He doesn't like lying down position anymore unless when he is sleepy. This is because he wants to see things. Yes...see things - especially things that move, like the wind chime, ceiling fan and his musical cot mobile.

It is now quite difficult to get him into the burping position as he now refuses to rest his head on my hand. He wants to look up all the time.

Shern still has jerky hands and legs movements. He cannot really control them well yet. It is very difficult to cut his finger and toe nails when he is awake. And when he is asleep, he will still sometimes startle and jerk up and I am afraid to accidentally cut him. 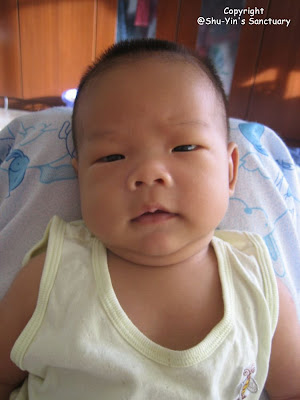 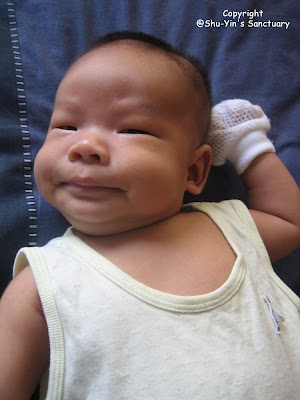 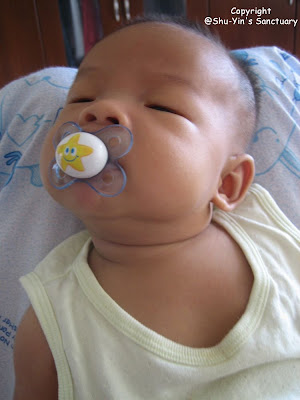 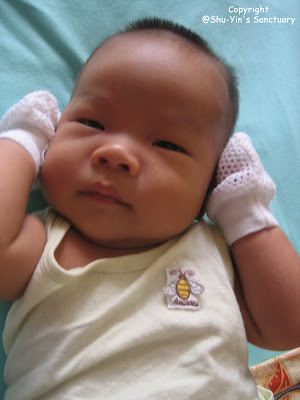 Shern ended the week by being an owl on Saturday night. He was awake from 2am-7am, insisting that I must walked while I carried and rocked him. At 7am, when everyone was supposed to be awake, he started feeling sleepy. *faints


How Is Mummy Doing?

Many people commented that I look 'more fleshy' compared to pre-pregnancy and that in fact makes me look better. I, by the way, like my new 'more fleshy' look but hate my flabby tummy and hips. I cannot fit into many of my 10-year-old pants!

I'm thinking of enrolling into some dancing/exercising classes. I miss ballet. I miss line dancing. I miss street latin dancing.
Maybe I should try yoga. Yoga sounds good. But my body is so inflexible right now - I can't even touch my toes without bending my knee *sigh...and I was a ballet dancer....ishhhh