It has been many years since the passing of my grandparents Ah Kong, Ee Kong & Pho-pho. I am glad that I have many happy and wonderful memories of them.

Ah Kong - His name was Cheong Kam Kee and he was my mum's dad. Mum used to tell me he was very strict with his children when they were small. My mum and her siblings were most afraid when it was time to let him sign their report cards. Those who got red writings on their report cards would not only get a lecture but a lashing as well.
However, the Ah Kong I know is nothing like what my mum described him. Mum said he had mellowed down throughout the years.

He would buy me ice-creams everytime I hear the ice-cream man ringing his bell and peddling into Macalister Lane.

He was China's supporter during the 1992 Thomas Cup and I would always "compete" with him during China vs. Malaysia match.

I still remember the pride in his voice when he showed everyone my Std.1 report card that showed a list of As for my semester 2 school results. He photocopied it and hung it in his workplace for everyone to see. He was even prouder than me for my achievement!

It had been more than 10 years since he passed on but he had etched an image of how a grandfather figure should be - kind, loving and proud of his grandchildren.


Ee Kong - His name was Tan Gin Hean and he was my dad's dad. Like Ah Kong, he was very strict and fierce with his children. He was someone who believed that good discipline (with rotan i mean!) is the key to educate your children. He may not be very wrong indeed as all of his 7 children are all good-mannered and successful adults in their own way. I myself is very proud of my dad whom my Ee Kong groomed him to be the most kindest dad in the world.

Ee Kong used to visit me quite often in his motorcycle when I stayed in Macalister Lane when I was small. He would buy me the tidbits and asked me to kiss him everytime he came over.

Without Ee Kong, I would never been able to attend the extra ballet classes I had near the ballet exams months. He took the trouble to fetch me to Greenapple Ballet Academy to and fro. I remembered once my slipper fell off during the ride and he stopped by the road and picked it up for me (asking me to stay on the bike as it was dangerous!).

Ee Kong has been gone for nearly 10 years now and I believe many of us still miss him a lot.


Pho-pho - Her name was Chong Weng Kwai and she was the person I love most in the world and still is. Since young, she took care of me. I am who I am today mostly because of her guidance and care during the first 5 years of my life. Even after that, she continued to give me advice on how to be a better person.

Pho-pho was a very kind person. She always forgave people and liked to look at the bright side for all things. She is someone who always gave me the drumstick while she ate the breast/bones.
I still remember all the cantonese rhymes and poems we used to chant together. She was also the one who taught me how to fold paper toys to play when I was bored.

I used to cry whenever I was to leave the house to stay with my parents to go to kindergarten during weekdays. I would say to my Pho-pho "Wave to me until far-far until I reached the other destination". Imagine how attached I was to her!

I remember i used to tell her "pho-pho, I will buy you big,big car to sit and big,big house to stay when I grow up" and she would always smile and said she would wait for me. I am sad that I am not able to fulfil my promise to her before she passed away 4 years ago.

However, I know that she is very happy that I am living a happy life now and I will never, ever forget her. Until now, I still miss her...very much!


Below are one of the few rare photos I still have with me: 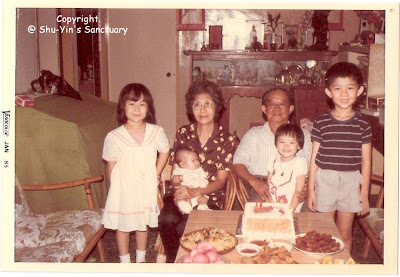 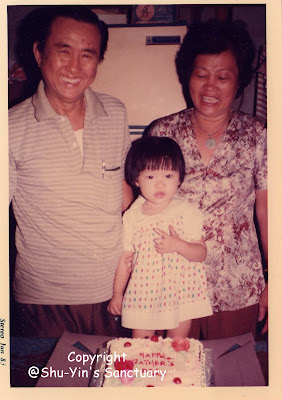 For those of you who still have your grandparents around, treasure them now. You can never say enough 'I Love Yous' and 'Thank Yous' to them for what they have sacrificed for you.

Email ThisBlogThis!Share to TwitterShare to FacebookShare to Pinterest
Labels: Relatives and Family, Reminiscence

Goodness... we all look so young! lol.

i always remember ah kong as someone who moves his fingers and legs when he sleeps! i always giggle when he did that!

ah kong used to buy me those round round tidbits. even when i'm in town, he would bring all the way for me with his motorbike!

remember the aeroplane made of the red part of the josstick that pho pho teach us to do? i think until now, we are the only one who knows how to do it!

i miss them toooooo *sob sob*

huey...yeah! last time when young i have no pimples, not like now!