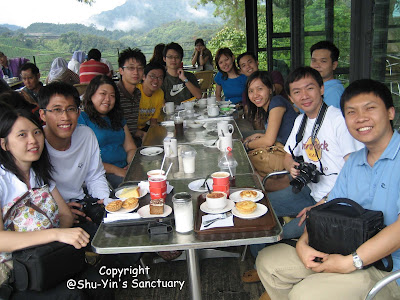 (group pic minus the photographer (me) @ Boh Tea Plantation)

Peter & I joined SS & Justin together with his colleagues to Cameron Highlands during the long weekend break. Monday was a replacement for Sat's Public Holiday: Penang Government's Bday. I believe it is the best time to go for hols around M'sia as Penang is the only state having hols, so the place will not be so congested!

This is my 3rd trip to Cameron Highlands this year. 1st time was with darlin' back in Mar 2005. And the 2nd time was only in Feb 2008 this year with my colleagues.

I like Cameron Highlands. The weather is nice - fresh air and cool breeze. Lots of strawberries and flowers. Of coz the companion must be nice too.

This time around, there were 13 of us in 3 cars. We stopped by Ipoh for breakfast on the way there. Reached Cameron around 1pm which was later than planned. After checking in Carnation Apartment, we headed straight to the Sungai Pallas Boh Tea Plantation. As usual, all of us spent some time at the coffee house overlooking the tea plantation. Darlin' & I enjoyed the magnificent view while sipping our hot 'teacino' and 'Boh teh tarik' and munching straberry tart and mushroom pie. 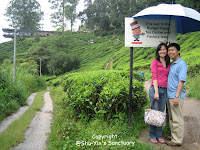 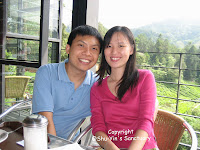 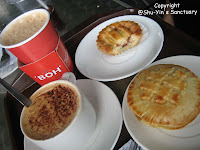 (Sungai Pallas Boh Tea Plantation visit)
I want to highlight one of our unfortunate scene. One of us brought along the electric steamboat cooker for home-made steamboat. To our horror, when we lifted the glass cover, the glass cover shattered into a million pieces. Some one said that it must be due to the drastic temperature changes - from boiling hot to cold wind exposure. However, I think there is no excuse for it. The manufacturer/company should know that electric steamboat cooker is sure to be exposed to high heat and there is no reason it cannot withstand the cold wind, etc.

Whatever the reason is, the main thing is that our steamboat dinner was spoilt. No one dared to put the food inside our mouth fearing the glass will cut our throats and stomachs! So we went out to a steamboat restaurant and paid rm13.60 for our dinner. Btw, it was one of the worst dinner ever - not worth the price with the stingy food given to us! Do not ever Restoran Silverstar in Brinchang!

Gambling session after dinner was nice. I leant a new game which i think is very popular in yahoo!games and one of facebook's application. It is called "Texas hold 'em poker". Haha..darlin' & I lost rm9.

The next morning, after checking out at 12noon, we went to Raju's Strawberry Farm, Honey Bee Farm and Cactus Point before leaving Cameron Highlands. We had late lunch in Ipoh tasting Iph's famous 'Nga Choy Kai' and we bought home Ipoh's famous ' salted chicken' and 'Yee Thye Charbroil heong Pneah'. 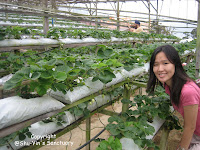 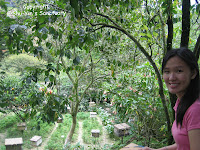 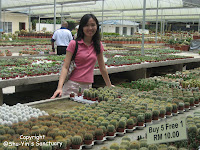 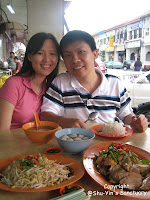 Ouh I LOVE Cameron Highlands!!! I haven't been there for ages. Ish if you told me I'll recommend you a super very nice satay there.

hey i am goin up cameron highlands next month...

heard of it? any comments?

of coz i googled before i booked dat place :P

what i meant is if u know dat place.. any comments not :)

the lady seems nice.. will keep u updated once i am back!

hey, i love cameron highlands too! i was there with my family end of june and don't mind visiting it again anytime soon... mainly for the cooling climate. :)