I have blogged about my school friends and even my colleagues. But another group of special friends which I haven't blog about are my college friends.

I took South Australian Matriculation (SAM) from Disted-Stamford College, Penang (previously known as Disted College). Then I continued on to earn my Bachelor Degree doing twinning with Deakin University and finished my last year of degree in Melbourne, Australia. I have made many good friends along the way.

I went to 'korek' out a few pics taken during my college days. They are a bit blur coz I scanned it using my scanner and the quality is not that good. 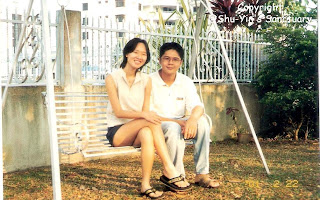 This is one of the pic i treasured most. This pic was taken at Danny's house in Tanjung Bungah, Penang. He lived near me and I used to fetch him to college on days our time matched! He helped me a lot for my IT and Maths paper.
Seating from l to r: me, Danny

Group picture taken at one of Disted's Lecture Hall. I have lost touch with them except for Ai-Leen and TJ. Heard that Rosalyn is still at Dell. As for Chuan and Grace, well...who can update me?
Standing from l to r : Ai-Leen, me
Seating from l to r: TJ, Chuan, Grace & Rosalyn 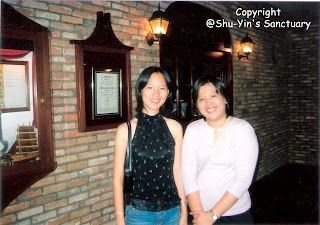 This pic was taken at the Rasa Sayang Hotel, Penang before the renovation took place. Lay Ming's aunt gave us a 50% discount to flavour Waka and up til now is one of my most memorable Japanese buffet dinner. I remembered I gobbled up almost 15 fresh oysters if I am not mistaken! ;P
Standing from l to r: me, Lay Ming

This pic was taken in 6/74 Glyndon Road's kitchen, Australia.
They are 2 of my very closest friends. Tarr Phai and Seow Wei. I grew close with Seow Wei only when I went over to Melbourne. Somehow, we just clicked straightaway. We could spend the whole day talking without getting tired and I slept over her place many nights when I was there! Seow Wei was the one who intro-ed me to Tarr Phai! Without Tarr Phai's car in Melb, we would have not enjoyed many late nights of fun! Remember Texas Chainsaw Masaccre, guys?
Standing from l to r: Tarr Phai, Seow Wei 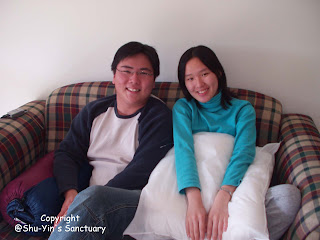 This pic was taken in 6/74 Glyndon Road's living room sofa. Tarr Phai intro-ed me to Jonathan. He is from East Malaysia if I am not mistaken. This guy is a joke man! He calls himself "mermaid" which until now I cannot understand why! Why would a guy call himself a mermaid? *scratches head*. I've lost touch with him and I think I shd make it a point to search him out...OK resolution 2009!
Seating from l to r: Jonathan, me

This pic was taken on one of our many stops on our way to the Great Ocean Road, Aus. I took SAM with them and Phooi Yee is now an accountant while I am not sure what is Wern Lynn doing now!
From l to r: Wern Lynn, Phooi Yee and me

They are 3 people whom I shared 10 months of my life with night and day! They were my housemates when I was in Melbourne, Aus from Feb-Dec 2003. This pic was taken at the Tesselaar Tulip Festival! Adrian is now in KL, Ndru at Gochecorp and Ee Lyn is with Dell. I miss you guys!
Standing from l to r: Adrian, Ndru, Ee Lyn, me 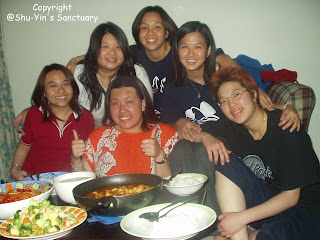 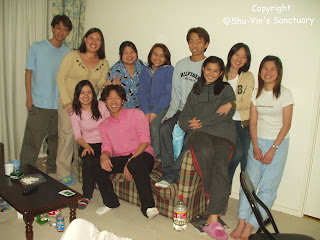 These 2 pics were taken at 6/74, Glyndon Road (the place which was home to Seow Wei, Debbie, Yit Fung and Suki in Melb). We had many great food there, many mahjong sessions, many sleepovers. I remembered there was once their electricity billed went up to nearly AUS500 for 3 mths! hahaha.

This pic was taken in my room and on my bed in 2/53 McIntyre Street.
Jas and Sue Mei are now both in Australia. I miss Sue Mei a lot!
From l to r: Jasmine, Sue Mei, me


This pic was taken at Healesview Sanctuary, Australia - a place where i got to pet koalas and kangaroos. It was a trip organized by the church.
From l to r: me, Sally, Doris & Yen


Wow...what a journey! I'm sorry if I have missed out any of my college friends, but pls blame it to the era where digital cams are not very popular yet! :P
I miss those college days. I even miss taking exams with you guys! :D

Shu Yin...you made me sad after read your this blog... I miss those time at Melbourne especially at 6/74, Glyndon Road.