Week 9 is from 9th - 15th November 2012.
It's the week where I brought Khye for his 2-month old check-up. And the week which I found out Khye weighs a hefty 6.1kg. Look at the top photo of Khye with his double-chin.

No wonder I felt that he is so heavy every time I carry him with my bare hands. Then I decided I need to get a baby carrier.

Putting Hands Into His Mouth

Khye found his hands and put them into his mouth starting this week. Most of the time is his right hand. So his mittens are now smeared with his saliva and need to be changed frequently.

Khye's eyes are really following object really well. I am quite often the object. Look at his eyes following me although I am looking at him from atop, aerial view. 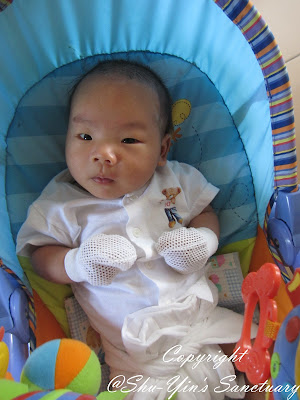 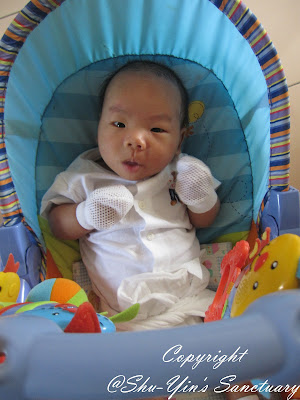 And Khye now looks at his Freddie the Dragonfly every time we hang it in the stroller for him. He doesn't seem to get bored with it and could stare at it for a very long time.
I love Lamaze toys, both my sons always seem to be very fascinated by them.

Khye is also very fascinated with his Ocean Wonders cot mobile. Look at his eyes following it, and him smiling at it. 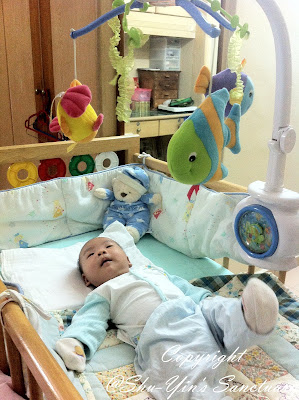 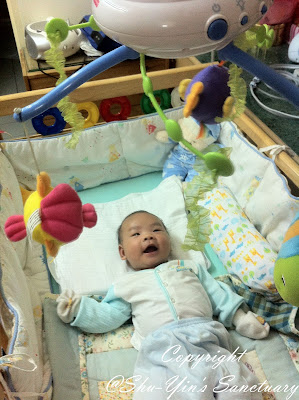 And Khye stares at me every time I am near, be it him lying on his cot, or even on his changing pad. 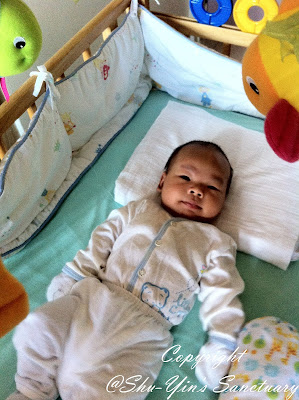 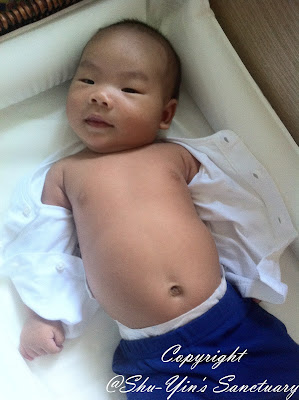 I like to see Khye's face slowly lighted up whenever people talk to him.
Look at his smile in the sequence photos below.... 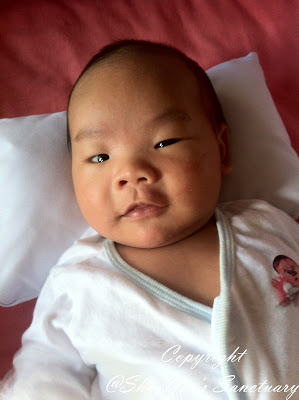 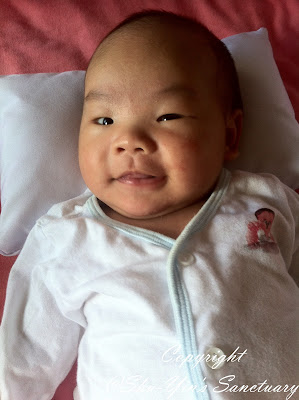 Since I am mostly at home, I do direct latching more in order for him not to forget how to latch on properly (since the paci incident that led to me having nipple cuts and tears).
He seems to be getting alright and latch on right away every time I put my breasts near to him.

Took a photo of both my boys one early morning. Khye was busy staring at his cot mobile and Shern was posing for my camera! :)

Khye sleeps in many ways.
Sometimes he sleeps straight like this. 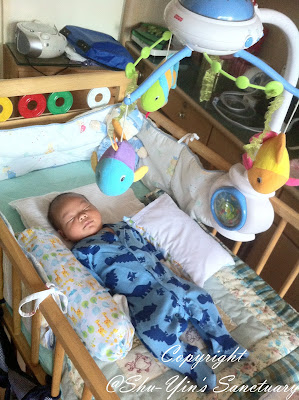 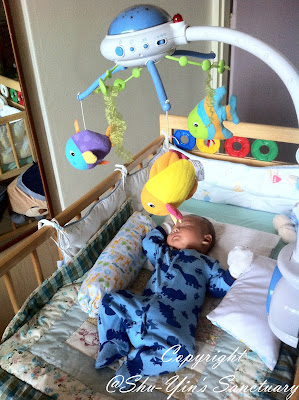 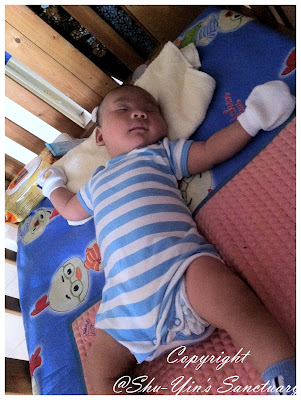 Khye sleeps happily in his car seat most of the time.
But we haven't been doing long journey yet, so I don't know how he will fare. Furthest is from Tanjung Bungah to Greenlane area and he is alright.

Hopefully he sits there alright until he gets big, and not like his brother who started to hate his car seat once he reached 6 mo.

This is Deepavali Week, so there were pretty Deepavali deco in the malls. Khye even took a photo with it. ;)

Look at Khye's expression being captured on camera. Priceless! ;P

You called Khye "Shern" a couple of times..heheh I do it with my girls too!

Angeline...
haha..yes i did. i always do that too. thanks for pointing it out for me :)