As suspected, it turned out that Khye really has latching issues. I guess we introduced the pacifier to him too soon. Unlike his bro, Khye was not so adept when it comes to different nipples/teats.

It took about 2 weeks for my nipples to heal, with all the nipple tears and cuts and milk blisters. After that I continued to express again while direct feeding Khye, hoping to boost my milk supply again.
I was a bit worried because I hadn't been expressing for 2 whole week and was so afraid that my milk supply would plummet.
I was really happy that after 2 weeks, I could still express 3-4oz. Phew.

But then there comes another hurdle. Khye started to reject bottle feeding! Arghh!!
So after 2 weeks of direct latch, Khye got so used to it that he obviously prefers my boobs to bottles. It seemed to us that he did not purposely rejected the bottle feeding, but more to not knowing how to suck from the Avent bottle. Fyi, I was using the old Avent bottles to bottle feed him.

He seems to cry out loud whenever we bottle-feed him, and that's quite a main concern because Khye seldom cries out loud. And he seemed to have trouble latching on the bottle to suck. Feeding him was difficult, because he would cry when he couldn't latch on the bottle. Sometimes it takes half an hour or so to bottle feed him. It was quite stressful.

So I googled and asked friends and went on a search of a better bottle teat, in hope that Khye can latch on better. Some friends recommended MAM teats, some recommended Bfree bottles. In the end, I bought the new Medela Calma teats, after doing some research.

There was a mispricing in Parkson so I bought it for only RM56, compared to the retail price of RM85. Hehe. And I've already got a Medela bottle, so I just fixed the teat to the bottle.

Anyway, there is some improvement on using this teat. Khye seems to be able to latch on this teat better. But somehow you could still see his dissatisfaction when giving him the bottle. Either the taste of the ebm he doesn't like, or he really prefers my boobs.

My breasts are getting real efficient these days. I can pump 5-6oz every 2.5 to 3 hours. Whoa...I don't pump as frequent as this all the time. Usually I drag it to 3-4 hours only then I pump. After his last feed at about 10pm, Khye will fall asleep. Then I will need to pump before I sleep which is about 12midnight or 1am. This is because Khye will only wake up for milk at about 4am.
And when I wake up at 8am, after I feed Khye, I still need to pump, as they still feel so heavy.

So now I have slightly more than a hundred bottles of ebm, averaging about 4-5oz per bottle. Khye drinks 3.5oz every 2-3hours, but I pump about 4-5oz every 3-4 hourly. That is why I have so much ;)

I have 2 freezers at home. One is the top door of my fridge, and another one is a loan from my cousin.
There....here are the 120 bottles, plus minus. My frozen ebm stash. Actually is not that much. If I suddenly go on hols, this stash can only last Khye for 18 days, which is about 2 weeks plus. 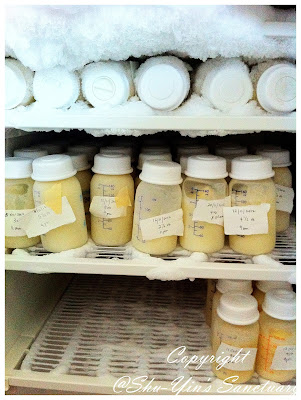 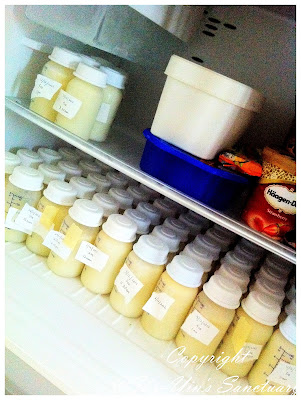 
I recently did a kind thing. Donated about 50oz (10 bottles) to my SIL who needs it for her newborn before her milk comes in. Hope my milk will help her and give her motivation to continuing her breastfeeding challenges.

I just came back from the pediatrician and Khye weighs 7.6kg @ 3 months. Ohh..really hefty weight. Doctor told me that breastfeeding babies generally weigh more for the initial months. I'm so glad my breastmilk is so awesome.
This is Khye @ 3 months old

Email ThisBlogThis!Share to TwitterShare to FacebookShare to Pinterest
Labels: Breastfeeding#2

Why you talking about kyle then suddenly become shern? You getting mixed up again or it just me? :)

sueann...haha. im so used to using shern that i cant stop typing shern shern shern. thanks for letting me know. ;)