Shern's 2nd Visit to the Dentist

6 months has passed since Shern's first visit to the dentist. We took him back to see Dr. Tow in SmileBay Dental Surgery, Tanjung Bungah.

As usual, we did not have to wait long because we already made an appointment.
This is Shern using the computer at the lounge area while waiting for his turn. Shern was just simply typing words into it. He likes sitting on the swivel chair there.

The moment Shern was called in, he said 'Hello Dr. Tow'.
Then he got to sit the 'airplane chair' which could go up and down. Then he allowed the dentist to check his teeth.

After checking, Dr. Tow told me his supposedly front 'dead tooth' is not so grey-ish now and not so obvious looking, and looks like it is still alive. So glad! And the dentist even commented that Shern's oral hygiene is actually very good.

Haha. Yes, actually Shern only brushes his teeth every night before he sleeps, and even then he still drink milk after that most of the days.
He doesn't brush his teeth in the morning. Sigh, I should start training him for that, but it is so difficult even to get him to eat his breakfast and change into his school uniform to go to playschool.

Dr. Tow said as Shern was so cooperative, she would try to do some polishing of his teeth, but without using any vibration.
Firstly, Dr. Tow asked Shern to show a finger to her. Then she uses the tool to polish Shern's fingernail, to show him that it is not painful. Then she asked for another finger, which then she polished it again. She told Shern that she is going to do this to his teeth and it won't cause him any pain.
I find that it was a good thing that the dentist told Shern what she was going to do to him, so Shern knew what to expect, and thus won't be afraid of what was coming.

And Shern actually opened his mouth for her to do it. After a few teeth, Dr. Tow would stop and let Shern had a gargle, so that he wouldn't feel so yucky with all his saliva building up. She didn't want to use the 'saliva sucker' tool as she wanted to minimize the tools being used, in order not to scare him away. So she stopped every now and then after a few teeth to let Shern gargle.

Halfway through, when Shern was getting a little uneasy, Dr. Tow said she had a little present for a good boy, if he let her finish polishing his teeth. She asked Shern if he likes cars or stamp? Shern answered car of course. 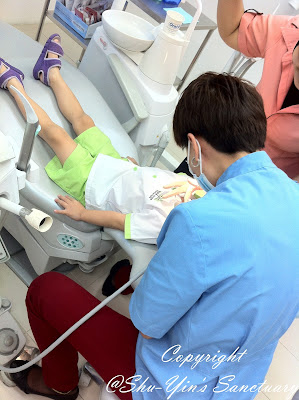 And that was how Shern got a little car pressie from the dentist.
And when he held the car in his hand, he quickly opened his mouth wide for the dentist to finish the job. Haha.
So that car pressie really works wonders! 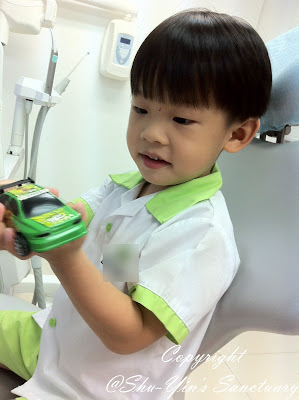 Shern was so happy with the car that after saying goodbye to Dr. Tow, he wheeled his new toy all around the lounge. 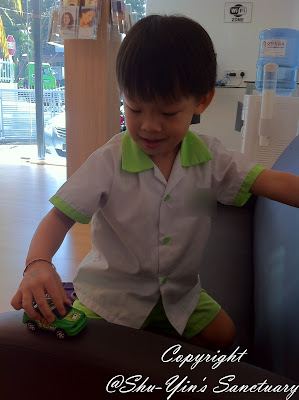 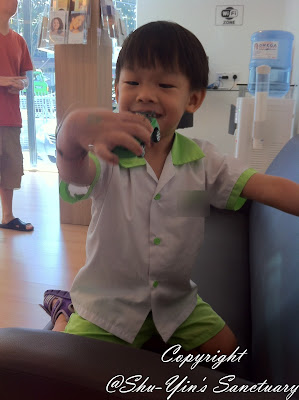 And when we were called to pay the bill, the nurse presented Shern his 'Certificate of Bravery'! Wow! Talk about making kids happy!
Shern told me that person flying is the 'Brush Teeth Superman!' Haha!

Shern was very proud and told me that the dentist gave him this because he was a brave and clever boy! 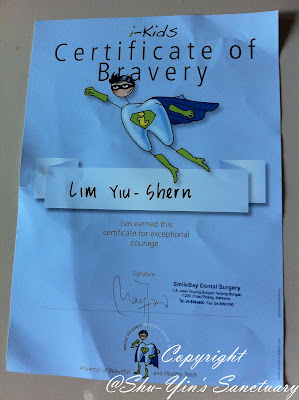 Oh ya, the bill was RM35.
I feel that bringing Shern to SmileBay was a very good and pleasant experience. Dr. Tow made Shern felt at ease and not scared of the dentist. In fact, he even looked forward for dentist visit. I totally recommend Dr. Tow from SmileBay to anyone who is looking for Child Dentistry!

Really very very nice, hopefully I can also find one here next time that's as good!

A certificate of bravery! How about that? Shern was really brave on his trip to the dentist, and his certificate only proves it! I’m really glad that Dr. Tow made Shern feel at ease. Whatever he did, it really worked! Maybe he can share some of his experience with kids, especially with Shern, with other dentists as well.

It was nice of the dentist to give Shern a certificate of bravery. Now that’s what you call positive reinforcement! How about he add another gift, aside from the certificate, for the next time Shern comes around? I think this’ll really help in boosting his already high morale about going to the dentist. I hope Shern’s following a healthy dental routine!

If I ever received a certificate of bravery, I’d surely be proud of myself! Hahaha! I think as a parent, you should really tell your kids how important it is to receive such a recognition. It’s simply one of the best ways for your children to appreciate the value of having a good oral habit. Every time he sees this, he will be motivated to take good care of his teeth. ;)

Generally kids do not like dentist visit but Shern is looking really happy. This all depends upon the first experience of dentist visit. I like that bravery certificate thing. Recently I took my little girl to Seapoint Clinic. The dentist was so understanding and he made her feel relax. It was a great experience for her and she is never going to deny for another dentist visit..