The last time we went, it was 2 years ago when Shern was 1 1/2 yo. We missed last year because we were in Cape Town.

This year, with Shern being 3 1/2 yo, we decided to bring him there again as he is much bigger and could enjoy more. Khye stayed at home with Pho-pho.

We reached there at 10am and the car park was already quite full with cars. There were so many people earlier than us. 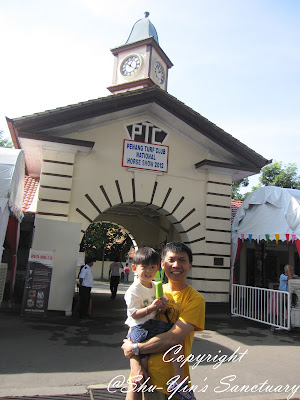 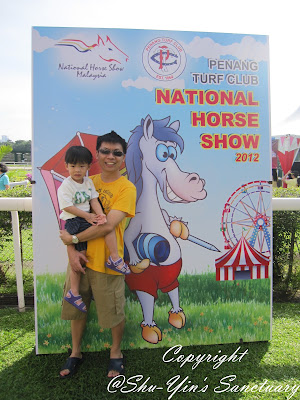 After we parked our car, we walked through the horses' stables and a horse-y smell greeted us. To tell the truth, it stank!
Surprisingly, Shern was very interested in the horses. He saw the different horses there and he even had a favourite horse. 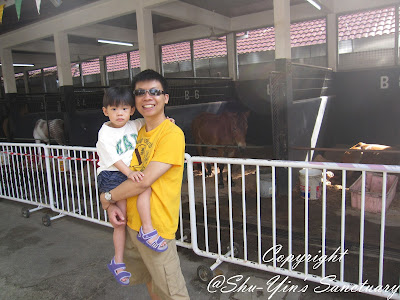 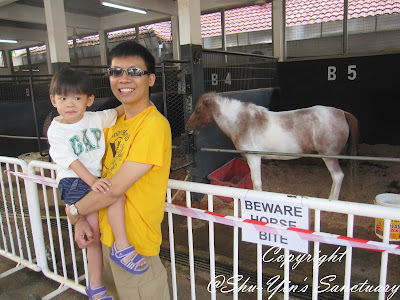 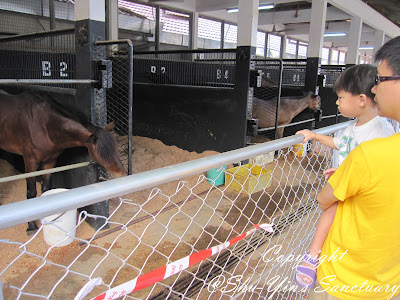 This is his favourite horse, Sarah.
Shern kept on saying, Hi, Sarah, my name is Yiu-Shern! :) 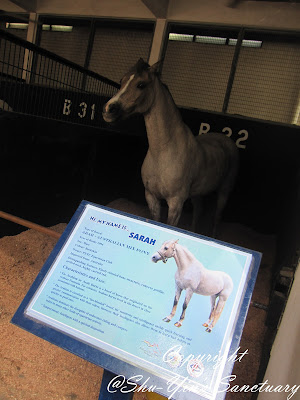 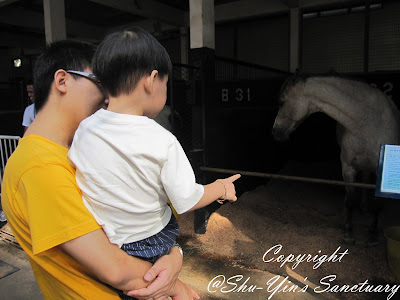 Next to Sarah was Little Squaw and Shern was brave enough to pet Little Squaw. But when the man asked Shern if he would like to open his palm to feed Little Squaw, Shern hesitated for a moment and said 'Erm...later'. Lol. 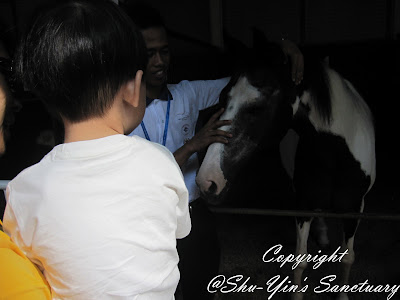 After that we showed Shern the shoeing of horses.
It looked pretty rough the way the man did the horseshoeing on the horse's hoof and it kind of scared Shern, but I assured Shern that the horse is not hurt. It is just like how I cut Shern's toenails. 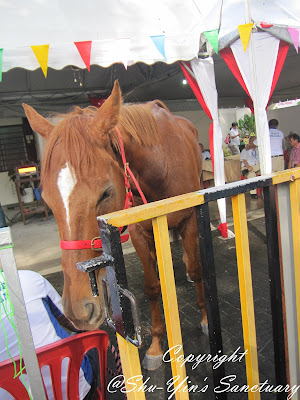 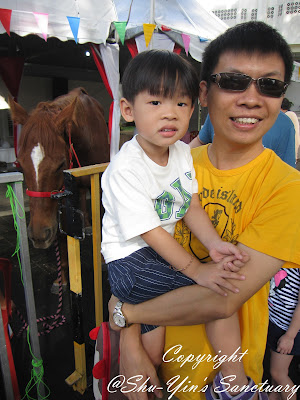 Unlike the last time, Shern no more cries when he saw the clowns. He even high-fived them and took photos with them!
He was amazed with one who stood on stilts and exclaimed that the clown 'has such long legs'! 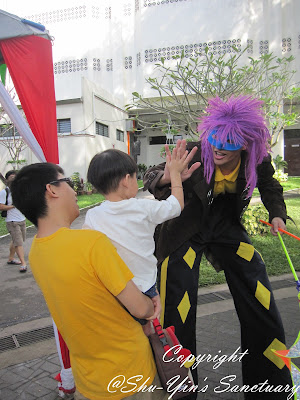 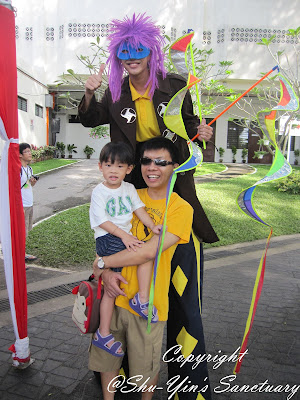 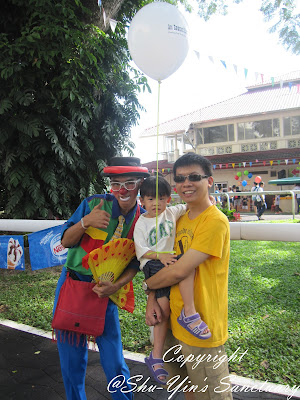 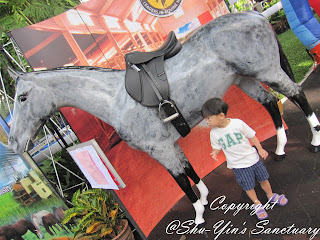 We then showed Shern the horse racing tracks and he said 'just like the car racing tracks, but is on grass! So clever! 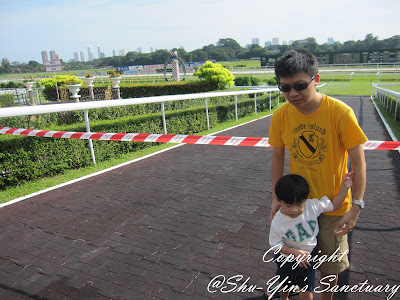 He even had a hand at a throwing game, which he didn't throw on target, but yet the lady gave him lots of candies! He was so happy! 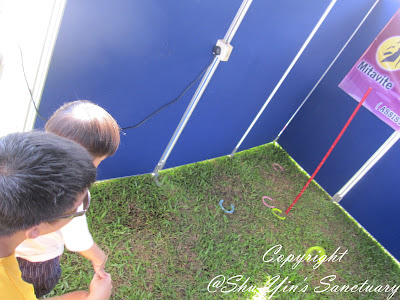 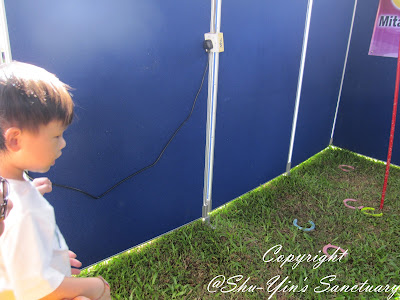 Then, it was Pony Riding time.
Hubby & I were initially not sure if Shern dared to ride on the pony alone (only for children). Asked Shern several times if he was sure and he said yes.
So below Shern was holding the pony ride ticket. Only RM3 per ride. 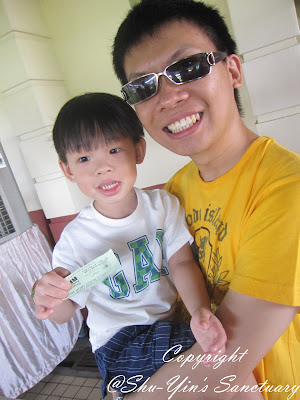 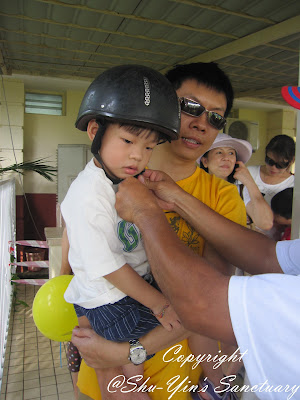 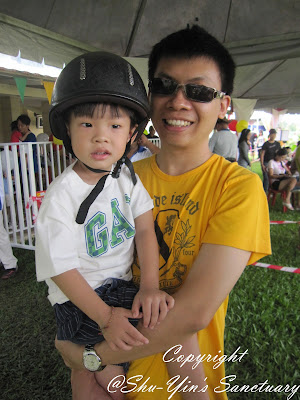 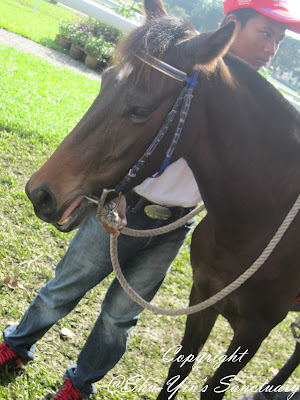 Shern walking up the stairs for his pony ride! 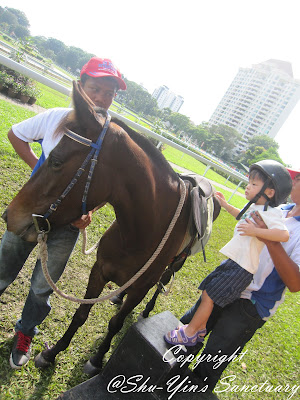 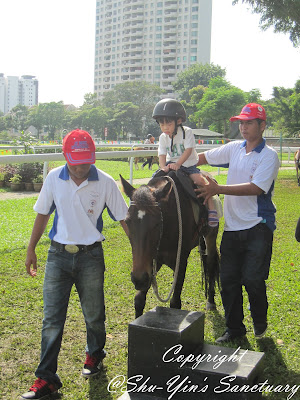 Below is the super short clip I managed to take of Shern riding his pony. An 8 sec clip before the man shooed me away!


Shern was so happy after riding it and told me he was not scared!
And that the pony went 'klok klok klok'! :)

After that balloon time. Shern got a free balloon!
Then it was ice-cream time. Shern had a traffic-light ice lolly! 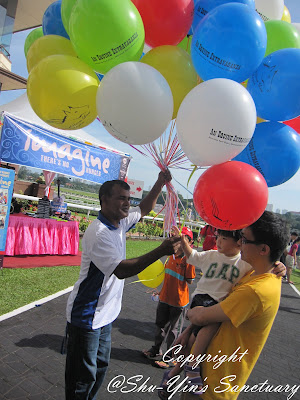 Then we went for a quick look at the stalls at the bazaar. 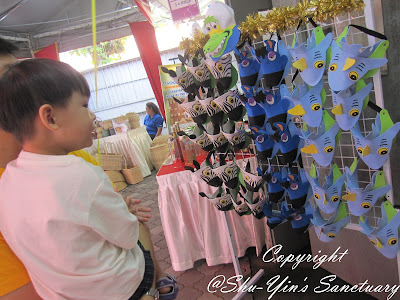 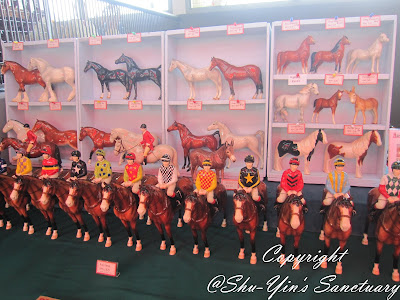 After that just before we went home, Shern asked to see Sarah again. Told you that is his favourite horse!
So happy we managed to bring Shern there! He certainly enjoyed himself!
Posted by tanshuyin at 12/04/2012 12:50:00 AM

I went to some event organized by Penang Turf Club some 20+ years ago, I was probably 6. I rode on a pony as well like Shern, but I fell off the pony. :) I don't think I'll want to ride on a horse ever again.