Bringing Shern Along To Visit The Gynae

About a month ago, I let Shern followed me to my monthly gynae visits. Now that my tummy is bigger, Shern is more aware that I have a baby inside me.

I told Shern that mummy's doctor is going to scan mummy's tummy and Shern can see the baby inside my tummy in the computer screen. Shern was curious and excited of course.
So Shern was waiting impatiently waiting for our turn.

However, we chose the wrong week to bring him there. On that particular day, we waited for nearly 2 hours before it was our turn. Usually, we only needed to wait for 30-40 mins. Luckily, Shern was not too fussy. And I thank my lucky stars that I remembered to pack Shern some snacks and stuff to occupy him.

This is Shern and Daddy watching the cartoon on the TV just outside the waiting room.

Shern sitting down and munching his snacks. 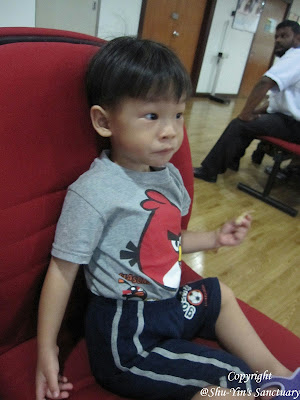 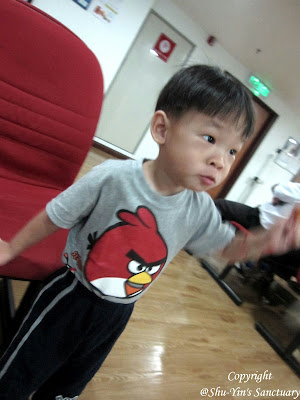 And then he got bored and wanted me to read books to him. So I read for him his Thomas & Friends books. 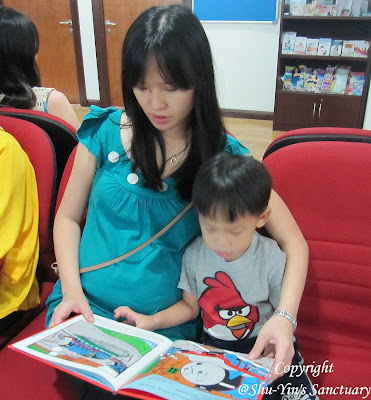 At last it was our turn. Shern went straight to the table, and seeing no toys there, he asked Dr. Eric 'Where are your toys?'. He said so because there are always toys on the paediatrician table. Haha.

Then when it was time for me to do my ultrasound scan, Shern wanted to lie next to me as well. So I let him be. He then followed and lifted up his shirt to reveal his tummy as well. It was really cute of him! Dr. Eric also obliged to his antics and offerred him some gel to put on his tummy as well! :)
Too bad we didn't take any photos of him in the doctor's room.

Shern was fascinated to see the baby moving in the screen and when he heard the baby's heartbeat, he said 'lub dub, lub dub'!

Shern is going to be a big ko ko now! :) OMG it's going to be soon... i remember it was just months ago that you told me bout lil bub, that means Lucas is growing fast too!! :( i miss when he's just so tiny and cute! you must enjoy your no2~! I can't wait to meet him :D

yes, time passes by so quickly. i also miss shern when he was less than a yr old. so innocent and cute. wont throw tantrum wan,,,hahaha,