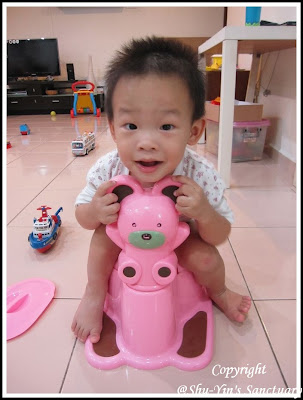 
Potty
Don't be deceived by the photo above. The photo shows that Shern is sitting on his potty. But actually, he was just posing while seating on his potty.
No, Shern is not yet potty-trained. I don't think he would be for the time being. He simply can't sit still long enough for him to poo. And if I bring him the potty while he is poo-ing, his poo would just simply vanished. He somehow 'sucked' the poo back and would refuse to poo while in the potty.
Sigh. I guess I fail in this potty training session. So forget it. For the time being at least. I am as stressed as him.


Speech
The most significant improvement these days is his speech development. It's really amazing that his speech improved so much. To think that I was worrying about him being a late talker just a few months ago, with him only calling 'mummy' and 'daddy' at 20 months. And now Shern is already speaking in sentences, although in short sentences most of the time.

Sometimes he can manage pretty long sentences too, like the sentence about flying, and can also made himself be understood.

"Cannot touch fire, can burn leg, burn hand" - whenever he sees fire
"This car cannot talk, only Spencer can talk" - he has this Spencer train which can talk if button pressed
"Mummy talk to aunty, cannot ar" - he doesn't want me to talk to my friend
"Only pho-pho house got cartoon" - knowing that he can only watch cartoon (tv) in pho-pho's house.

So you can see I am pretty much amazed by the sudden leap in his speech development.

I also sent an email to Miss Evelyn Oh at Pacific Speech Therapist to update her about my son's speech development, and also to thank her for the guidance she gave me months ago.


Toys
Nothing changed. He is still very much into his toy cars, zooming them everywhere in the house. On the table, on the floor, on walls, etc. And most of the time, he has one car in his hands even when we are going out.

But like I mentioned, he likes his wooden loop-y toy and I've recently trying to get him interested in playing his blocks. So far, all he is interested in is knocking them down. Sometimes he would stack 3-4 pieces and then he would knock them down for sure.


Books
One thing I am very grateful for. Shern loves books. He couldn't get enough of them. He reads any books as long as I read them in an interesting manner, and of course it helps when the books have colourful illustrations. Sometimes I am rather wary when I hear Shern says "mummy, read book", because he would say it again once I am done.
"mummy, read book again". Yes, he knows how to use the word 'again'.

Most of his books I bought from Leo Bookstore. Most of them second-hand which costs me about RM3-8 each. Very good bargain as they are still in good condition and many of them are hardcover imported books.


Pacifier
He is not that addicted to his pacifier anymore. He still asks for it, but not so addicted anymore. And I recently noticed that when he is at home, he seldom asks for it. He knows that the pacifier is only when he sleeps and is in the bedroom.
But when he is in pho-pho's house, he somehow whines for it whenever he thinks of it. And sometimes he gets it.

I read this quote somewhere which says "children are spoilt because no one will spank grandma". I find it so true. :)


Walking
Bringing Shern out sometimes is such a chore. Because most of the time, he refuses to walk. And he refuses to sit in his stroller.
Nowadays since he can understand us more, I tell him "mummy cannot carry you because you are too heavy. My hand hurts". He looked at me as if he understands and then he would turn over to hubby and says "daddy carry". Wahhh....


Food
Shern somehow prefers noodles over rice. He eats rice too of course, but if you let him spot any of us having noodles, he would say "ai mee-mee".

Shern also likes cheese and yogurt, which is fine to me. And these days, he prefers Vitagen over Yakult. He calls it "purple" because he likes the grape flavoured Vitagen.

And his favourite snack recently is "milo with biscuit" - Hup Seng biscuit dipped into Milo drinks, and "bread with egg-egg" - bread dipped into half-boiled egg.

Method: Bring water in a pot to a boil. Once boiling, turn off the fire. Put your eggs in (cold from the fridge) and time it for 3 minutes or slightly a few seconds more if you prefer a less runny yolk.

I am now a half-boiled egg expert. :P


Recent Things
Overall, Shern had a good month, as he always do. He went to KL and Lumut, ate satays and siput like a pro, swooshed down the giant slides in Adventure Zone, and even managed to get a huge swollen bruise on his forehead.
What a month!