After our trip to CTY Aquarium, we went home for Shern to have a nap. But after 2 hours in the bedroom, Shern was still awake. I was almost asleep but Shern was still tossing and turning about in bed.
I then reluctantly opened the bedroom door, in which Shern shouted 'Yay, open door, go out'!

It was 4pm by then we decided to go up to Teluk Bahang Fisherman Jetty. The sky was cloudy, which was a perfect day for a stroll along the jettiesout over the ocean.

The directions to the jetty is easy. Just drive all the way up to Batu Feringghi and then all the way straight. When you come to a roundabout, just take the 12 o'clock and continued 'til the end of the road. Then you will come across the Taman Negara entrance.
It is the same entrance. Go inside the gates but then look onto your right. The Teluk Bahang Fisherman Jetty is just there. You won't miss it.

When we reached, we could see that there were 2 jetties side by side.
On the right is the old, rickety, wooden jetty.
On the left is the new jetty made of steel and with railings. 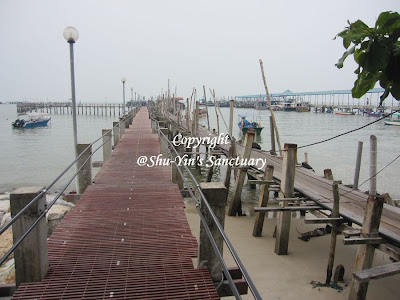 The old, rickety, wooden jetty is very rustic looking.
It is made of pieces of wood overlapping each other and leaning against each other by support. You get this feeling that if a nail pops out, the whole thing would just simply collapse. 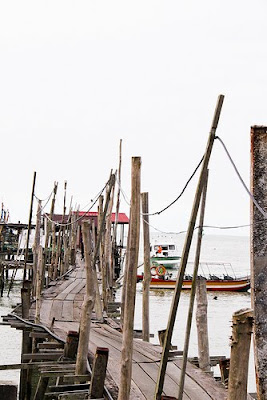 And it is also way narrower than the new jetty. Half the width I think. 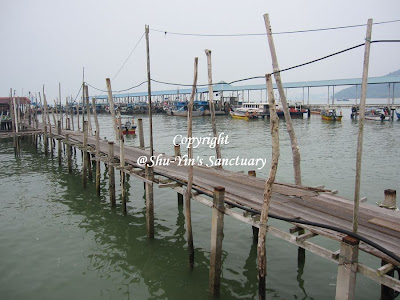 The locals there would normally use this jetty as they have used it for years. And we even spotted a motorcycle or two riding on it! 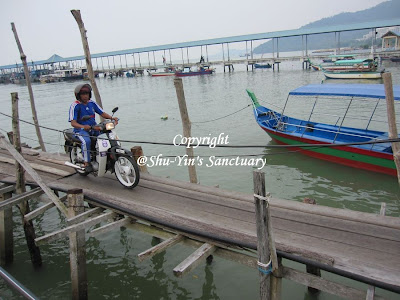 Naturally, as a mother, my instinct was to choose to walk the new jetty with railings. 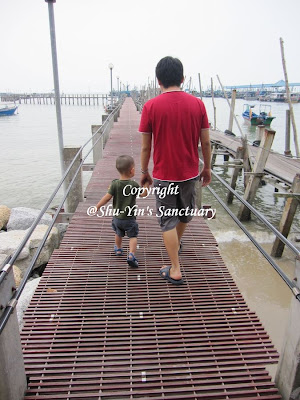 So hand-in-hand, Shern & dad walked across the new jetty.
And even though Shern did not have his afternoon nap, he was not cranky at all. Very surprising indeed. And he even walked all the way and did not asked to be carried at all! 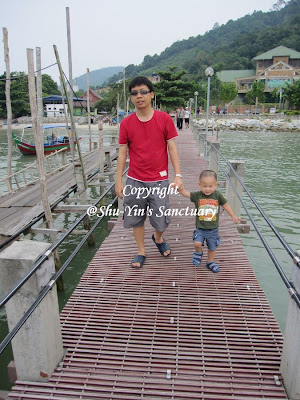 It was quite a long walk to reach the end of the new jetty as you can see but it was a very nice walk. The air is cool being a cloudy day and the ocean breeze was cool and nice. 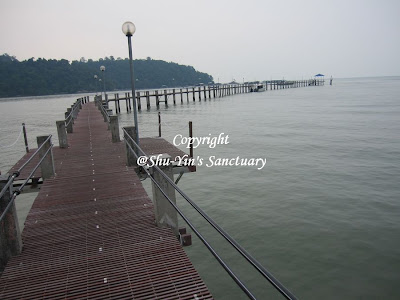 Shern stopped once in a while to look at the fisherman boats all docked nearby. 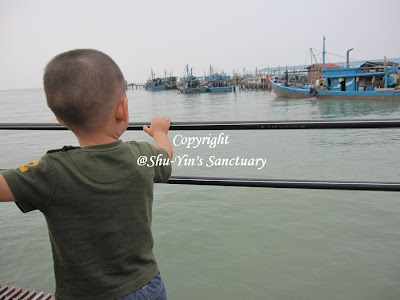 Shern also stopped to look for fish, but we couldn't spot any. 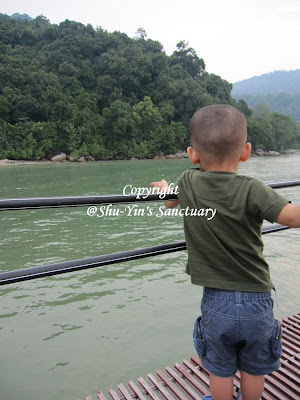 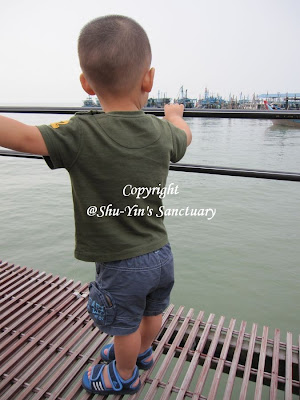 As you walk further, the old, wooden jetty is further away and is also shorter than the new jetty we were walking on. 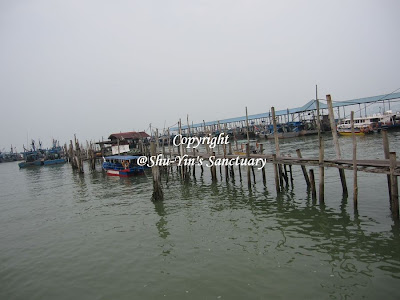 Shern stopped to notice the gaps and 'holes' on the jetty underneath his feet. Small little things like this fascinates my little boy. ;) 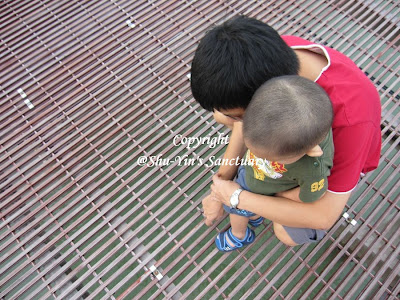 Look at the sun hiding behind the clouds. Perfect cloudy day for a walk out on hot, humid Penang. 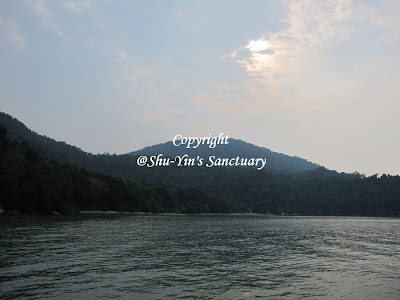 Shern was tugging at hubby excitedly, urging daddy to go faster. Why? 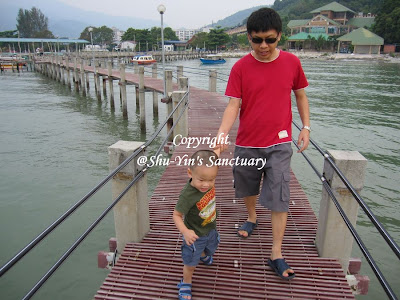 Because he spotted a boat docking nearby. He wanted to see the boat. Haha. 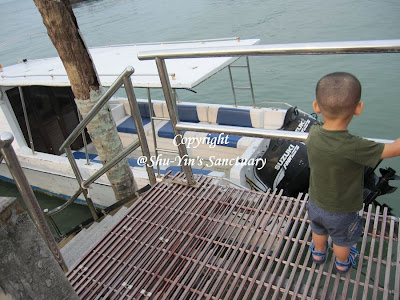 After that, off we walked again. On and on again until we reached the end of the jetty. 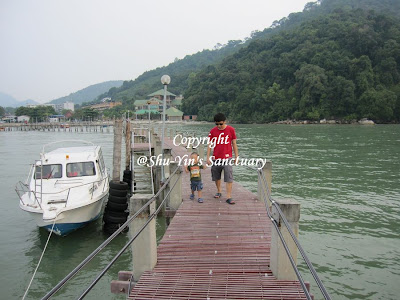 At the end of the jetty is where the railing stop. At the end, there is also a blue roof-like shade with a bigger platform. 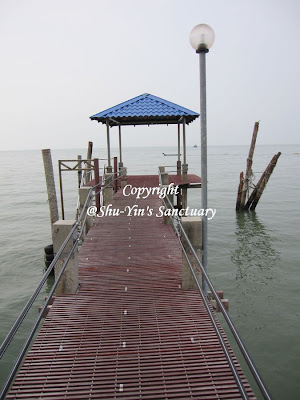 That is also the place where we sat down on the holey-platform to have a snack or two.
Shern was eating bread with Nutella and also a piece of Cheese. 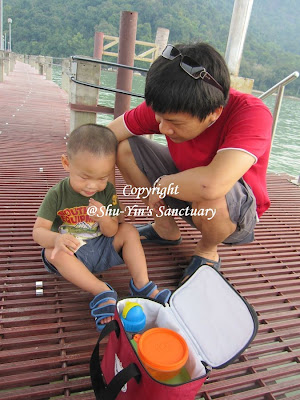 A small piece of cheese fell into the hole below and I heard Shern said 'bye Cheese. See you'. Haha. He is so funny. 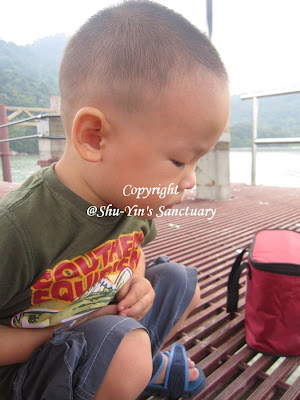 Shern sat on hubby's lap while enjoying the cool breeze. 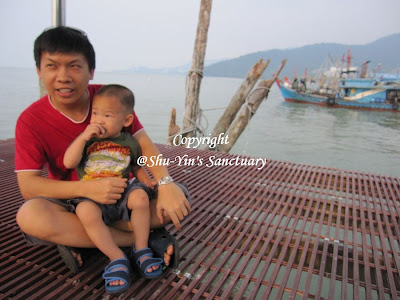 No photo of me, so I decided to take a self-take photo. Not bad. Everyone is in the photo! 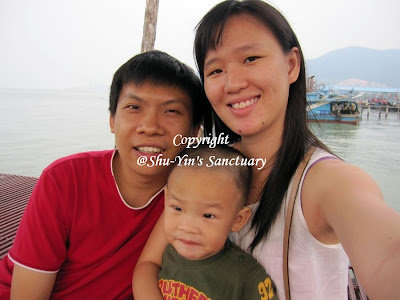 We sat there for like half an hour waiting for Shern enjoying his snacks. Then we started walking back.
Spotted the evening sun came out from behind the clouds. Shern wanted to watch as well so we let him wear hubby's shades to shield his eyes from the glaring sun. 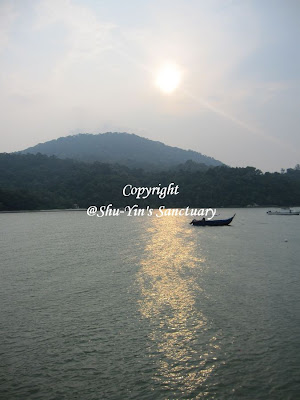 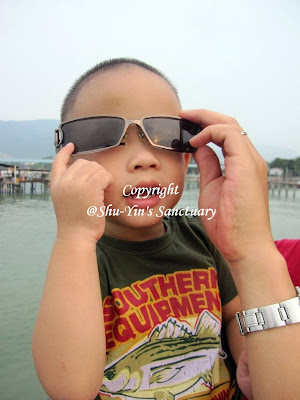 It was really a very nice 2 hour for the 3 of us. Definitely a place we would go again.
Peace and serene and full of nature. Great place!

Wah. Shern so kuai, hold hands walk and sit together with daddy.. my Jaden? I think I would need to bring a float and lots of change of clothes.. or maybe just a rope to tie him onto my back while I walk along the jetty.. AHHAHAHA

haha. Shern usually wants us to carry him. But at that time he was so kuai and walked by himself n letting daddy hold his hands coz mummy was the photographer! ;)