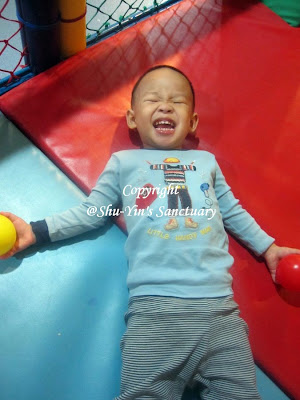 Yes, we brought Shern to the Adventure Zone again last week as part of the cuti-cuti Penang week. Since I already blogged about the place, I won't blog about it again.

But the only difference this time is that Shern had the courage to go for the blue slide - The Double Drop Slide.
The blue slide is called the 'Double Drop' slide, with a ball pit exit, stands 20 feet tall and has a length of 48 feet.

Min-Yee who joined us this time was the one who took Shern to see and asked him if he wanted to sit that slide. When we reached there, the person taking care even asked Shern is he really wanted to sit the slide. (he was afraid we were forcing him I guess. :P). Shern said 'ai ai aiiii...'

So let us witness my daredevil son....


And this was how he went again and again.

Tks for droppping by. Nice blog.