Parents & Ah-yee flew off to Singapore, so 3 of us decided to take a break too. First stop on Wednesday was to Chew Thean Yeang/CTY Aquarium at Burmah Road on Wednesday morning.

You can find all kinds of sea creatures there and also some pets. 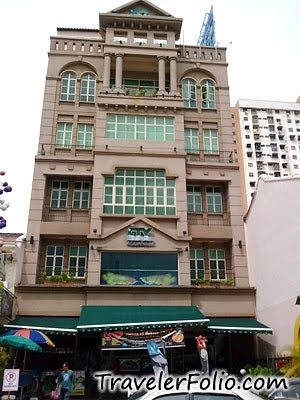 This is Shern's first time there. We thought it would be fun to bring him there since now he knows a lot of animals/sea creatures names but have not seen them before, except in his books/tv.
Too bad that the place does not allow photography. So no photos of the sea creatures and animals.

The moment he stepped into place, he shouted 'Nemo' for he saw some fake Clown Fish hanging above the place as deco.
At the front is marine life where there are many sea creatures in nice and landscaped aquariums. 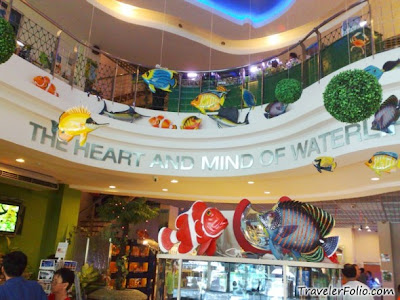 He had a nice time looking at the 'Nemo' and saying 'so many fish'.
He had a cute way of describing them such as 'fish got light' for the illuminating fishes,
'fish got chiu-chiu' for Arowanas, and
'fish head got ball' for the Flowerhorn which are fish with protruding heads. :)

He also saw for the first time sting rays and lobsters, etc which he has learnt from his books.

Then we passed by this pond where there were many Koi fishes. We saw a sign which says we could buy a packet of fish food for just RM1. Decided to let Shern feed the fish. That was the best decision we have ever made because Shern was so happy.

Well, Shern dropped the fish food one by one into the pond. You know how small are those fish food right? It looks like he could never finish the whole packet. But he was so happy feeding the fish that we let him be.

The moment you throw in the fish food, all the Kois all fought for the food. I wonder if they feed them at all, or are they being fed only when people like us buy the RM1 fish food? *shrugs* 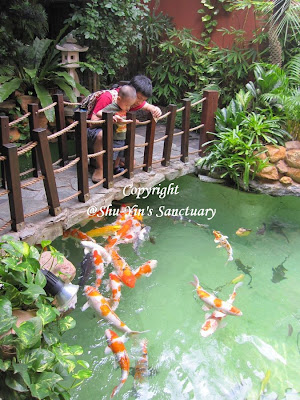 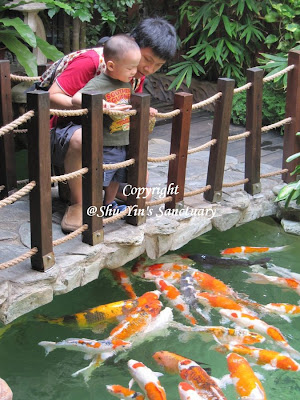 It was daddy & Shern bonding time, with hubby holding the fish food in his palm for Shern to pick them one by one. Haha. 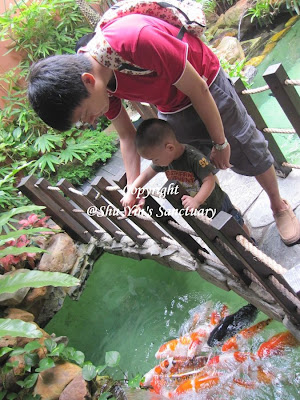 There is another mini pond with baby Kois beside it so we took Shern to throw in a few for them as well. 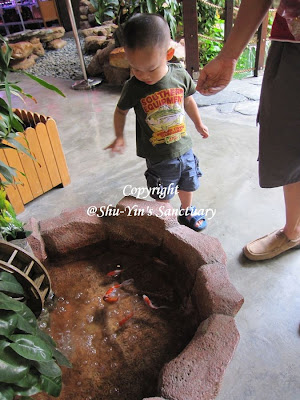 Shern then continued feeding the fish in the big pond. He spent quite some time there. Yes, because he fed them fish food one by one. :P 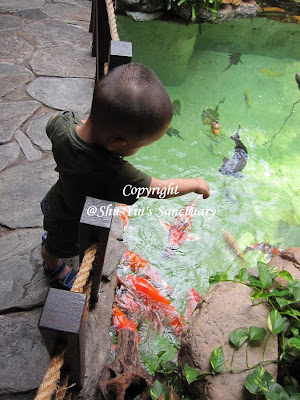 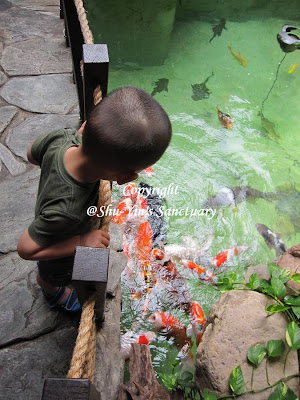 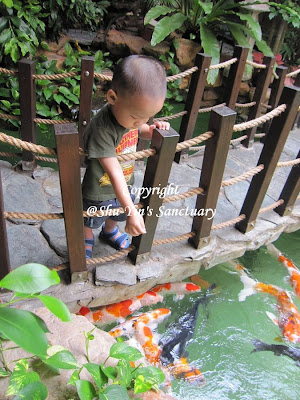 I tried to get him to smile for the camera. I said 'Shern, smile' and that was what I got. A scrunched up face smile and with him not looking at me because he was more interested in those Kois. 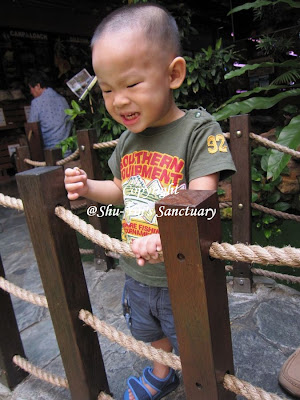 I kinda like this photo below because it was taken by another camera angle, but Min says Shern looks stunted here. Ah well. 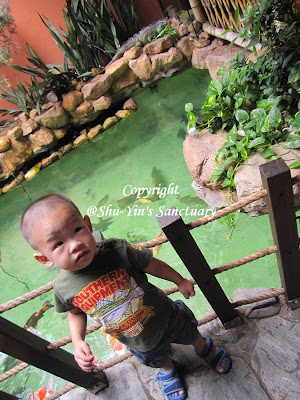 We couldn't pry him off the fish pond. He was so engrossed with fish feeding. 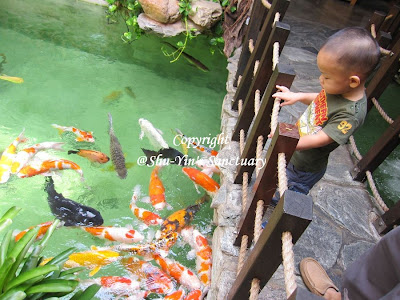 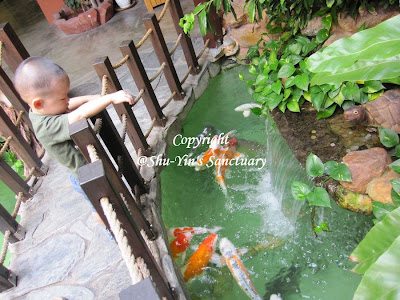 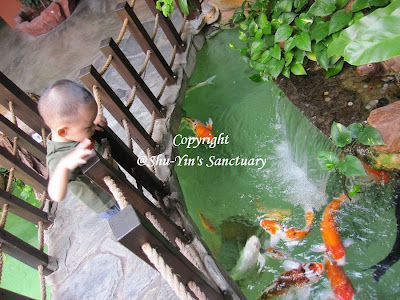 Behind the pond is rows and rows of aquariums and some tanks. I wanted to see them and not just feeding the Kois. So somehow I need to lure Shern there. Hehe. 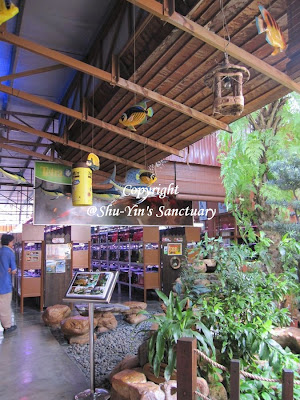 From the pond to the aquariums behind, there are some exotic pets such as this big Iguana that Shern calls is 'crocodile'. 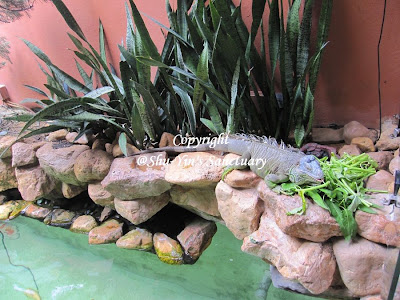 And a Mini Dragon that Shern calls it 'lizard'. Haha.
Shern is smart enough to know which is big and small. Big one he says crocodile and small one he says lizard. Amazing! :P 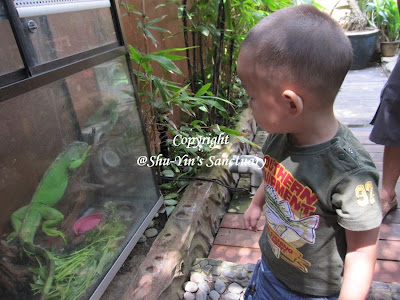 At last we were there. Just a photo that shows you the rows of aquariums. No photo-taking for individual sea creatures allowed. Shern was also interested when he saw some prawns and turtles and many other sea creatures. 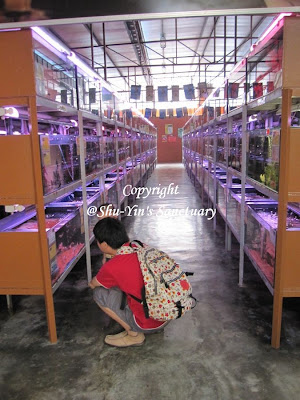 But after 10 minutes or so, Shern was impatient to go back feeding his fish.
There was still another section next to the pond which has small pets such as dogs, cats, hamsters, rabbits, chipmunks, snakes, etc.
We told Shern there are rabbits there and that got him interested.
No photo-taking for this section too.

Then back to the pond we went. We taught Shern to feed more fish food at one go so that the packet of fish food would finish faster. If not, we would have to sleep there overnight looking at the rate Shern was feeding the fish. Wakaka. Ok, a bit exaggerated but it felt really long. 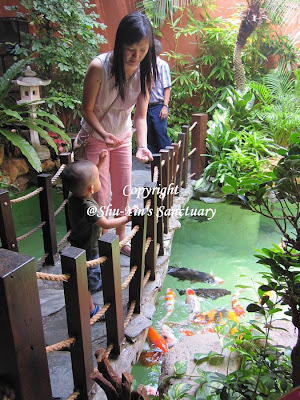 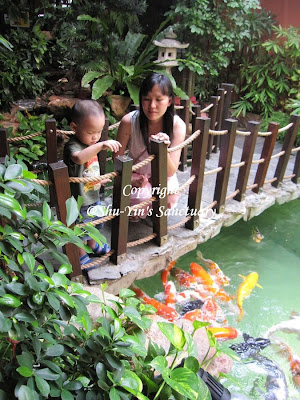 A photo with mummy 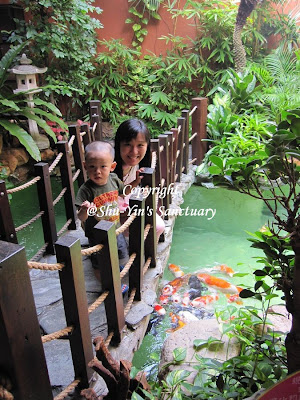 Shern walking on the mini pond bridge before we left the place. 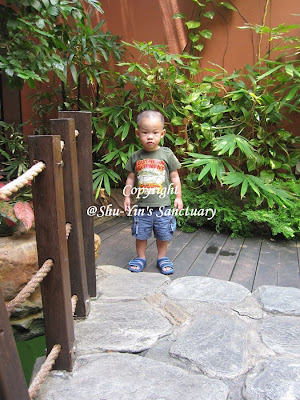 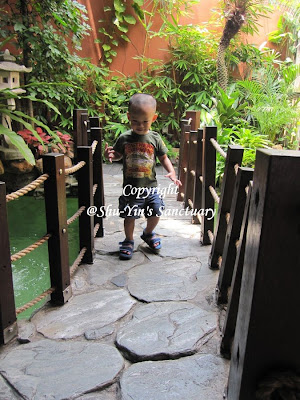 This is the back door of CTY Aquarium which is also the carpark for its customers. 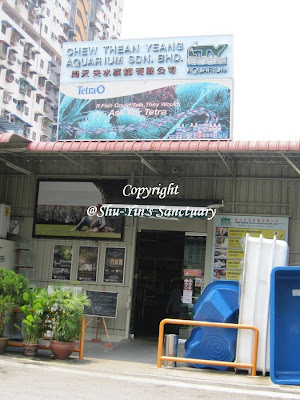 I recommend people to bring their kids here. It is like a mini zoo and aquarium with many sea creatures and pets.