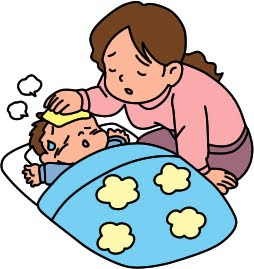 It was the first time Shern fell sick. It was end of last month. The weather was very hot and humid. We were sweating every day.

I was busy feeding Shern with cooled, drinking water as frequently as I could. But most of the time, Shern either drank just a sip or two, or he refused water at all. I had no choice but to feed him water using spoon. Even that, he tried blowing bubbles the moment the spoonful of water reached his mouth.

So, Shern fell sick. He was rather warm one morning. By the time I went out and came back in the afternoon, Shern was already having fever. The ear thermometer read 38.2 degree celcius. That was high!

I then gave him some baby paracetamol and his fever got better. But the fever came back during the night. It was a terribly, long night because Shern fussed the whole night through because he could not sleep well.

The next day, I took him to see Dr. Chiah. Shern was given medicine for his fever and also cough and flu medicine. All to be taken only when necessary.

The following day, Shern had no more fever, but it was replaced by a little cough and runny nose. This disturbed him at night and he woke up and cry every time he coughed. And I knew he had trouble breathing because of his runny nose.

His cough and flu lasted for a few more days. Then he got better and less cranky. By then, I was exhausted.