Yiu-Shern was already a very active foetus when he was in my belly. He kicked and punched and turned cartwheels in my belly all the time during my 3rd trimester.

Now that he is 9 mths old, Shern is still the same. He is still a very active baby.

First of all, let me tell you this. It is very difficult to get Shern to take his daytime naps. And he refuses to lie down.

To him,
lying down = sleeping
sleeping = no more playing

Therefore, he will try his very best not to lie down. And it is always a battle during changing times. He will howl and cry pitifully whenever I force him to lie down for change of nappy / clothes. So now, I've tried many ways to change him while he is sitting/standing.

And when he is awake, Shern will crawl here and there. Now that he can pull himself up to standing positions, he goes up and down all the time. 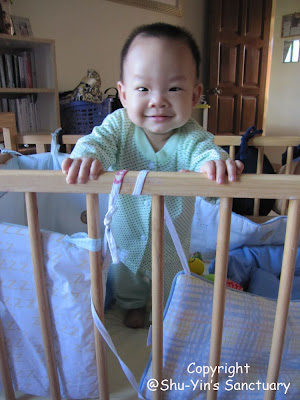 20 February 2010
As he is not that stable yet, we still have to keep a watchful eye over him. But alas, he still bumps his head sometimes. He'll cry for awhile and in less than a minute, up and down he goes again...

Sigh. I have to accept it. My baby is a very active baby.

Email ThisBlogThis!Share to TwitterShare to FacebookShare to Pinterest
Labels: Life As A Mummy, Lim Yiu-Shern

hahha same here jaden trying to walk now. Pengsan..more tired so can understand your situation there. Bear with it..that would pass very soon

so jaden can now walk unassisted dee? or is he cruising dee?