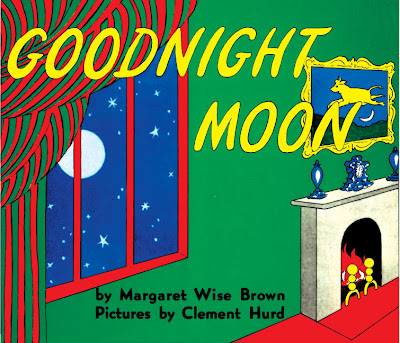 Goodnight Moon is a children's bedtime story book written by Margaret Wise Brown and illustrated by Clement Hurd . It was first published in 1947. The content depicts the process of a child saying goodnight to everything around.

I have established reading Goodnight Moon to Shern as his bedtime routine.

At first, I thought I’d get tired of reading him the same story every night. I started reading to him when he was three months old. Reading to him was a struggle initially but now that his attention span is longer, he gets pretty excited and focuses on the book as well. Even though at times he grabs the book to take a bite, as long as he shows some interest, I continued reading it to him to reinforce the reading habit.

The funny thing is I’ve found that I love to read Goodnight Moon. I initially thought that I'll grow tired of it, but surprisingly, I didn't. Yes, every night the little bunny says goodnight to the same objects in his same green room in the same order.

The text is a poem, with simple words and gentle rhymes.

I find that the book's text and illustrations are matched in a way that it is natural to point out the words and pictures to your child, and for them to do the same as they grow older I hope.

I, myself do not know why Shern is appealed to the book. Maybe it is the alternate pages between colours and black & white pages. Maybe it is the rhyme. Or maybe is because this book's colours are bold and simple, without colour shades.

Now that Shern is almost 9 months old, I still read this book to him almost every night. And now he can sit quietly on my lap (which is rare) while I read the book to him.

There is also a marvelous video I found in youtube on this book. Although the video is great, but the book itself does wonders. So, don't just show the video to your child. Show the child the book and the video.