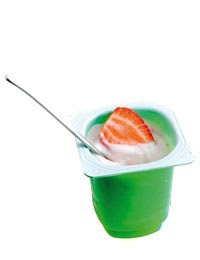 http://www.healthyfood.co.nz
If you're wondering why yogurt gets the okay ahead of milk – which you should hold off on introducing until your child is 12 months old – it's because the active bacterial cultures found in yogurt, such as thermophilus and bulgaricus, break down the lactose and make it easier to digest. The process of making yogurt also modifies the milk proteins, making them easier to digest. (http://www.babycenter.com/)
Since Shern is nearly 8 mths now, I bought Anlene's Hi-Calcium Low Fat Natural Yogurt for Shern. I did not opt for the one with fruit flavouring because I find that they are a little too-sweet for babies. And I reckon that if fruit is needed, then I will mashed in some bananas or peaches for him myself.
So does Shern likes it? 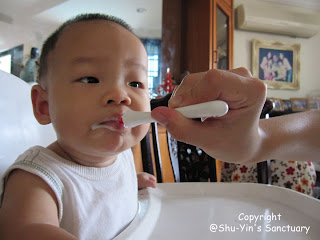 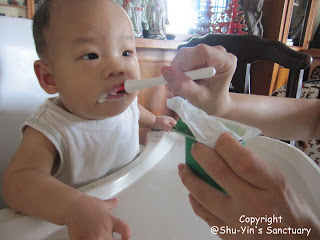 3 Feb 2010
From the photos above, you can see that he absolutely loves it. In fact, he finished the whole small 120g of yogurt in a cup.

Actually, it is good to buy the baby the 'full-cream' version of the yogurt, rather than the 'low fat' version but I could NOT find a single yogurt which does not have the word 'low fat'. Geez...is everyone in Penang into the Kate Moss rail-thin figure?

Yogurt has lotsa health benefits providing a boost to Shern's health. Now that I've introduced yogurt to Shern, it will be his once to twice a week treat. Maybe once a while, I will mashed in some fruits for him or sprinkle some wheat germ into it for extra boost!
Posted by tanshuyin at 2/06/2010 12:05:00 PM