My first time eating potato rosti was when I went to Switzerland to visit Pat. Eaten with ketchup it tasted delicious and until now I still love it.

So i tried making it yesterday for breakfast. Just whipped it up myself without any recipe. Taste turned out OK but I guess although lack of ingredients to make it mouth-watering.

To make potato rosti, I was supposed to use a grater to coarsely grate the potatoes. However, I don't own a grater at home (making mental note to get one asap!), I used the kitchen knife to just chop the potato into small pieces.

Then I rinsed it under cold running water to remove the 'slimy juice'. Then I just went to pan-fried it with butter and salt and pepper to taste.

You can actually add bacon pieces and onions to compliment it but I'd ran out of them so I just made plain potato rosti.

Potato rosti is supposed to be golden brown and slightly burnt. But because we are feeling rather 'heaty' these days, I removed them from the pan before it got burnt. So we ended up eating not-so-golden-brown potato rosti.

Peter says it tasted good....so I guess it was quite successful! 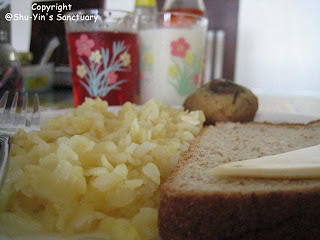 I served it with a piece of wholemeal bread with half a piece of cheese (which Peter refused to touch!) and also 1 pc of left-over mini banana raisin muffin. Also served with a mini glass of cranberry juice and fresh milk. 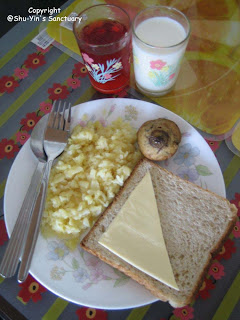 Peter is so lucky to have such a good homemaker like you!~~

haha. now in mood nya so he lucky. when im not in the mood, he will juz need to drink milo with biscuits that's all.

how does it feel when the husband refuse to touch portions of the food the wife prepares? just curious and mentally preparing for 'marriage' hehe.

kooi, u just need to prepare everything you like to eat. if your husband refuse to eat any of the portion... it's your lucky time. just pray he din touch any of the food, so you can have it all tee hee

karen..usually peter eats everything i cook. cheese n milk is smtg i already know he wont eat, unless they are in pizzas or in the form of icecreams. so not surprised when he refused to touch the half of the pc of cheese.

but it really makes cooking/baking more interesting when ur hubby eats everything u cook...thus giving u motivation n support to continue cooking/baking! :D
that's y i love peter!