You know what makes me happy? Cooking a super delicious breakfast goodness and snacks to enjoy while reading my favourite novel! 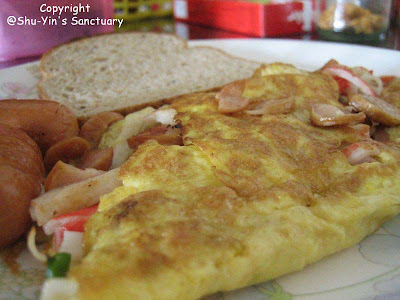 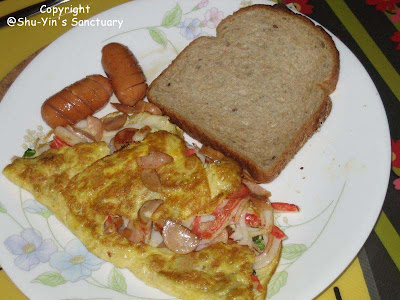 Recipe:
1. Beat 2 eggs in a bowl. Sprinkle in some pepper.
2. Heat the pan and smear some butter to oil the pan.
3. Put in the egg.
4. While the egg is half cooked in the pan, sprinkle in some chopped spring onions, shredded crabsticks and cut sausages.
5. Halve the egg in the pan and turn it over.
6. Serve with a piece or two of wholemeal bread to make a wholesome meal. 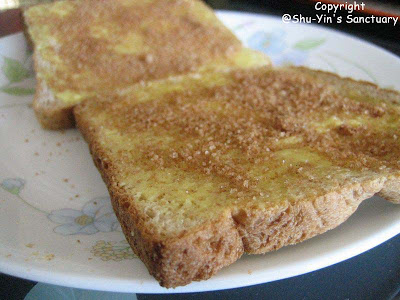 Recipe:
1. In a bowl, mix some brown sugar with the ground cinnamon, adjusting the sugar to cinnamon to your liking. Put aside.
2. Toast the bread in the oven toaster.
3. Butter one side of the bread and sprinkle generously with the cinnamon sugar.
4. Eat while it is hot. 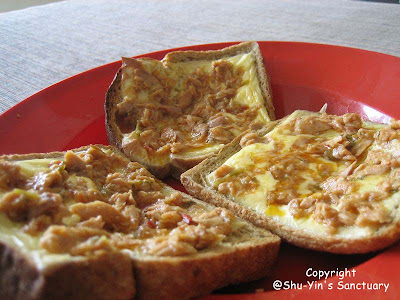 Recipe:
1. Put a slice of cheese on top of your wholemeal bread. Toast it in the oven.
2. When the cheese melts, remove from the oven.
3. Spread some chilli tuna on top of the cheese.
4. Eat straightaway. 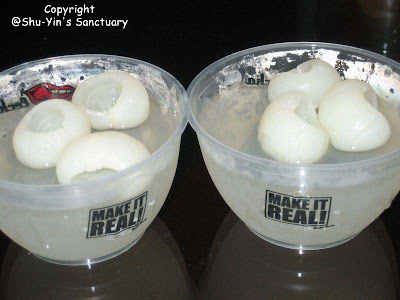 Recipe:
1. Cook the agar-agar according to the packet label in measuring the amount of sugar. :P
2. Scoop up the agar-agar solution and divide them into cups.
3. Open a can of longans and place a longan or two on top of the agar-agar when they start to harden.
4. Refrigerate them to serve them cold.

ur blog is turning into a food blog. haha

not only her blog. these days Shu-Yin's blog, facebook status, msn status... all about food!!! next time meet peter sure his potbelly bigger :P

min...eh..most things also u get to enjoy wan if u come to my hse!

shuey...haha. make sure u aim at peter's belly the next time u see him!

hmm... maybe you can start taking pics of peter so we can all track his belly ;)

shuey...muahahaha. he will kill me!

chiaoju...oohh..so u dont mind 100%cooked eggs.
u juz dont like those half-boiled, sunny side up, etc! ooh..icic!