I've been on the same school bus from Kindergarten 1 to Form 5. That is since I was age 5 to age 17. And the reason is because the school bus uncle which we call him 'Ah Hoe Cek' aka Uncle Ah Hoe is the best one I've ever seen.
Since Kindergarten, Ah Hoe Cek tried his very best to make it a pleasant school trip for me. I used to cry for my mummy in the bus on the way to school. Ah Hoe Cek will took the trouble to stop at a public phone booth and pretended to call my mummy so that I will stop crying! (of coz I didn't know he was pretending at that time!)
And C21 is one of the few busses whom we are given treats (eg: lollipops, pacifier-type sweets). And he is never late to fetch us to school.
He even plays 'water' with us on the last day of school every year. Shu-Min looked forward to that day every year and refuses to let daddy fetch her back on the last day of school because she wants to have fun in Ah Hoe Cek's bus! Ah Hoe Cek never minded to have to clean his bus after the mess we always make in his bus on the last day of school.
My grandma likes Ah Hoe Cek too because she said he is gentle and careful. She likes seeing him holds the children's hands to cross the street. He never allows the children to cross the street themselves...even though it is just a mini-street.
On the 4th day of CNY, Shu-Min and her friend and I went to Ah Hoe Cek & Ah Ee's house for CNY house visiting. He is so much older now but you can still see the twinkles in his eyes. He still teases us and jokes around. Ah Ee looks the same...almost as young as 10+ yrs ago. 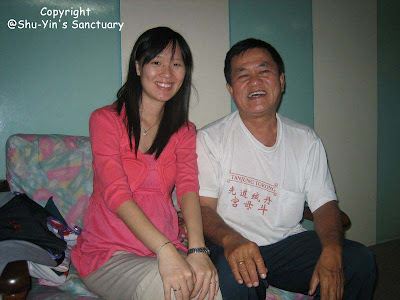 me with Ah Hoe Cek 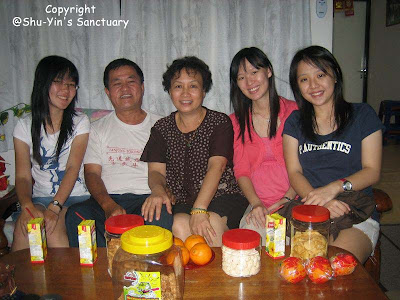 That is very nice of you

omg.. i was amazed when i read this. yeahh..totally agree with you. They are the best bus sekolah. I even sit ah hoe chek and ah ee's bus before.

skylicious...u r? how did u got to know of my blog? do u know me? or juz stumbled upon my blog accidentally?

Bus from Singapore to Malacca said...

I found it quiet interesting ,Thank you for posting the great content…I was looking for something like this…, hopefully you will keep posting such blogs…