After out last Thumbprint Freight Train art & craft, Shern was keen to do another activity, preferable something to do with trains (yes, again!). Based on the same Pinterest pin, I tried out this Painting With Trains activity with Shern yesterday.

It's a very easy activity. Just squeeze some paints onto a piece of paper and roll the trains over it.
We used the Thomas Take'n'Play die-cast trains for easier wash off afterwards. Just make sure your engines has no electronics in it, if not you'll ruin them!
And also make sure if you are doing it indoors like me, lay a sheet of protective paper (I just used old newspapers!) for less mess!

And just like Jessica mummy, I initially thought of squeezing those paints onto anywhere on the piece of paper. But Shern had his own idea and started squeezing the paints in a row on one end of the paper. (and I did NOT show him the Pinterest board pic!)
Are all kids like this? Hmmm.... 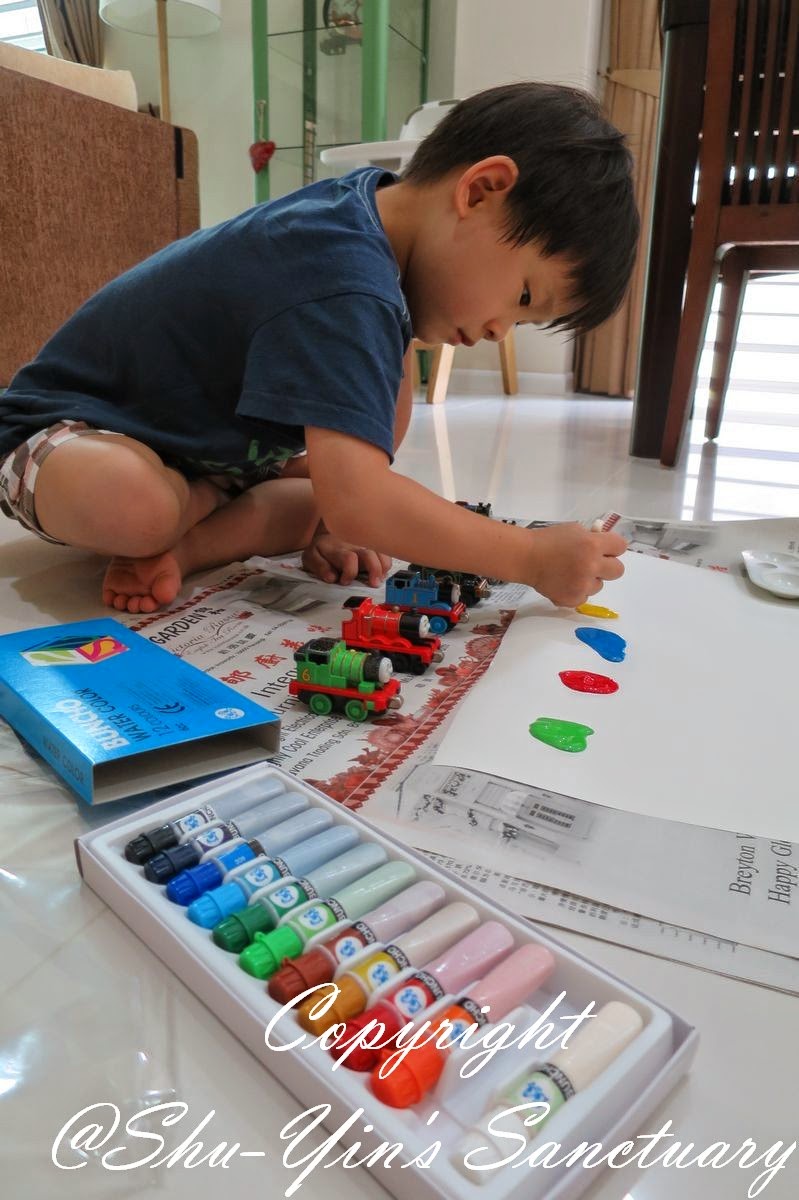 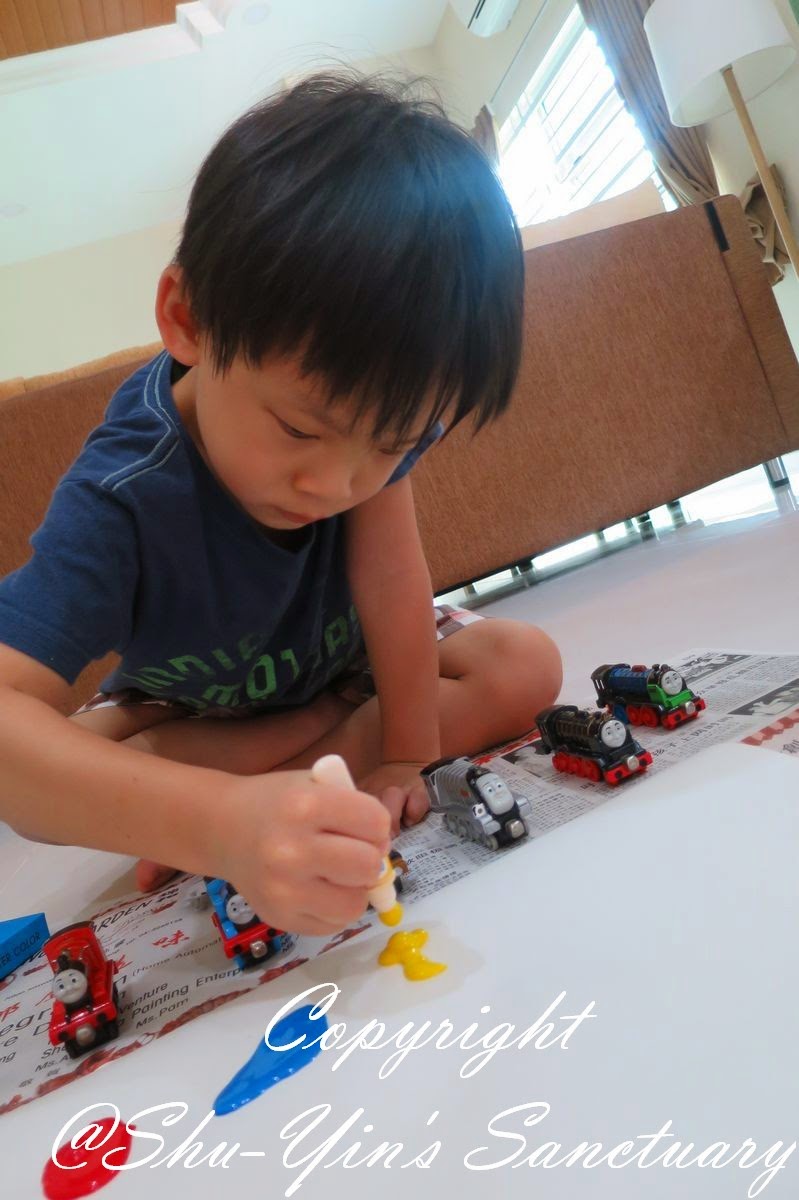 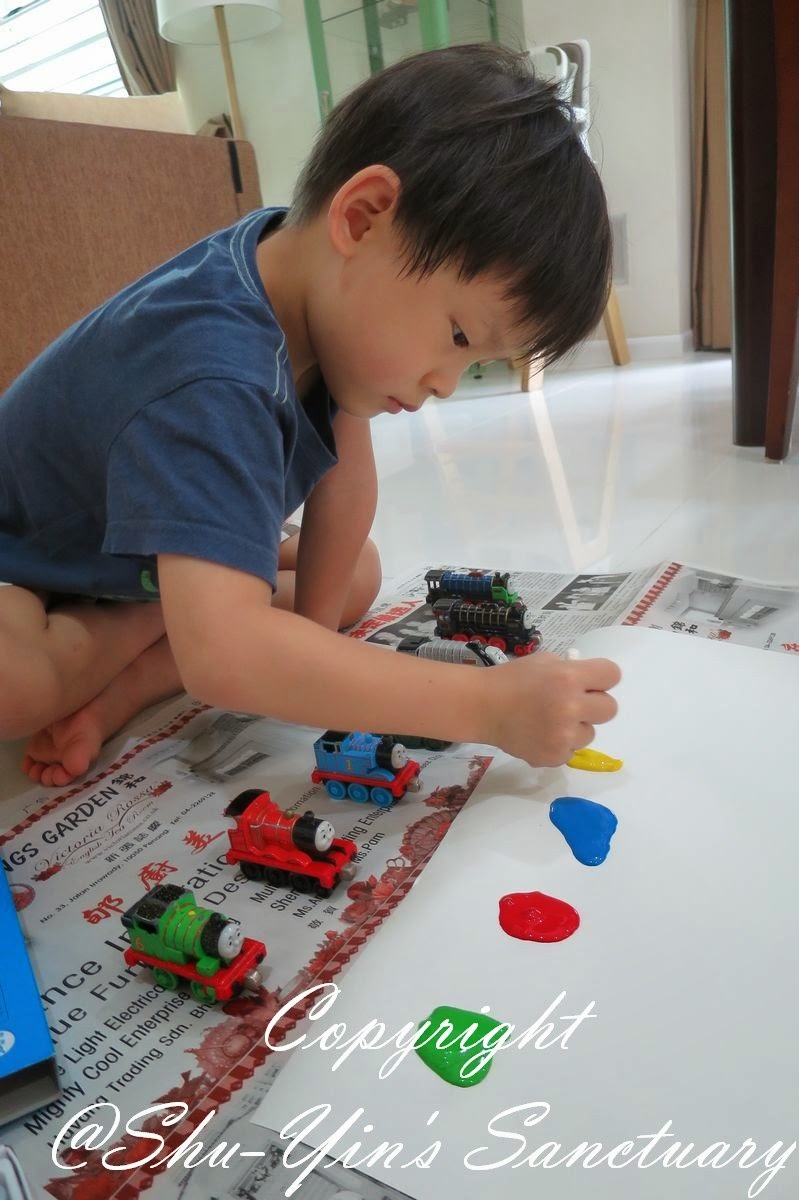 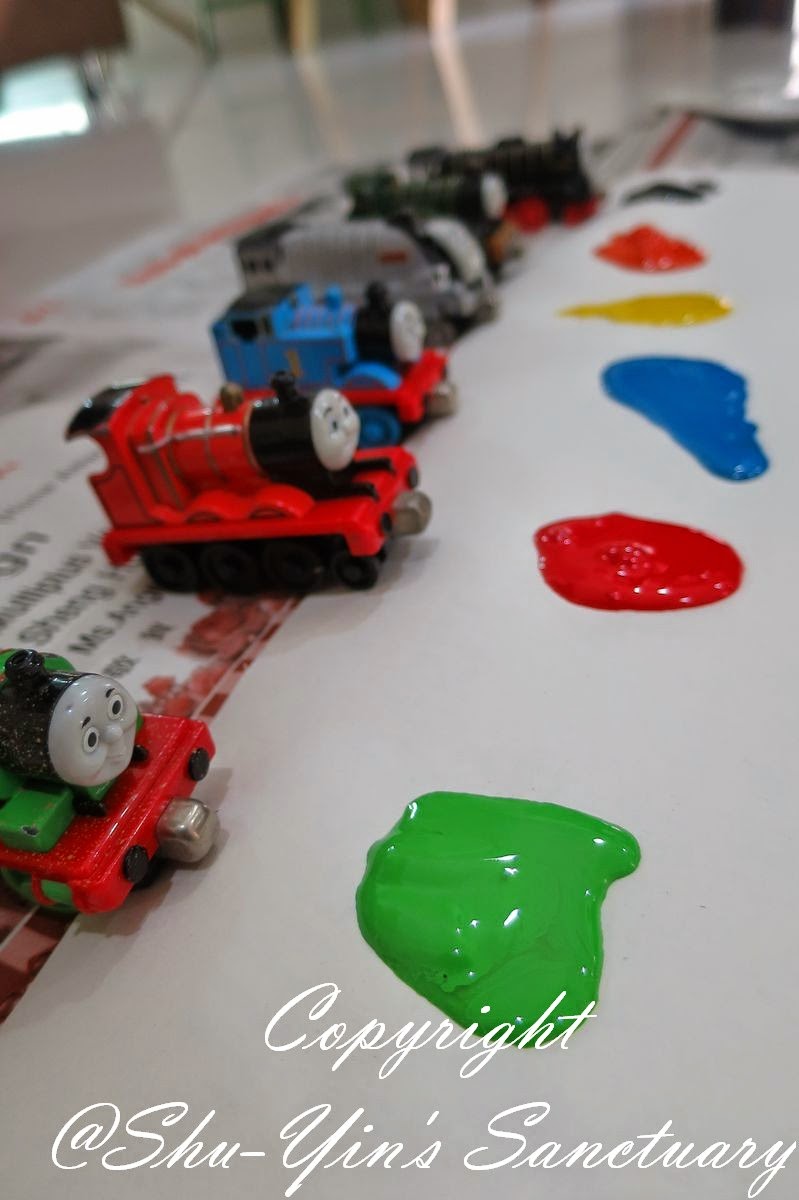 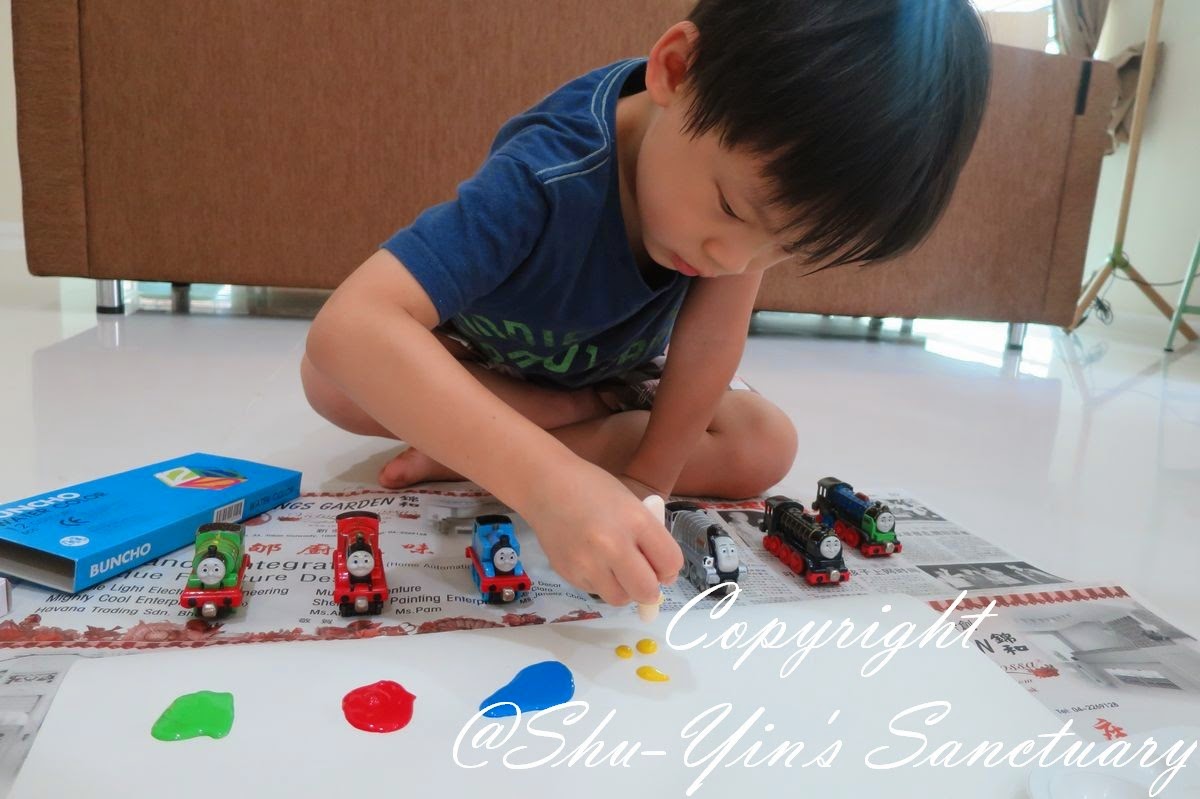 And then Shern chose the engines he wanted to match the colours. Some of the colours he substituted with different coloured engines.

So we ended up with:
- Percy for Green
- James for Red
- Thomas for Blue
- Spencer for Yellow
- Emily for Orange, and
- Hiro for Black

Yes, I know all the engine's name. How can I be a mummy to 2 boys if I don't know their names, right?

The engines all queued up in front of their designated colour paint puddles. 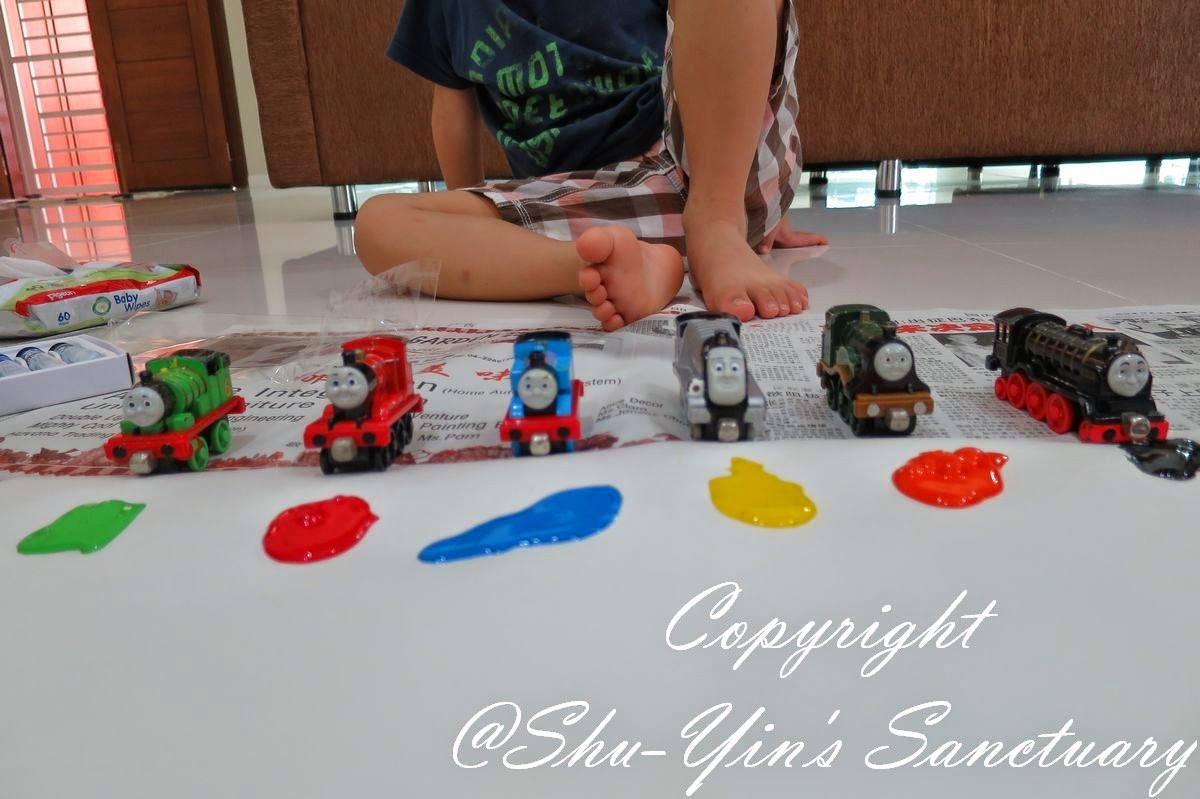 Shern and his engines. 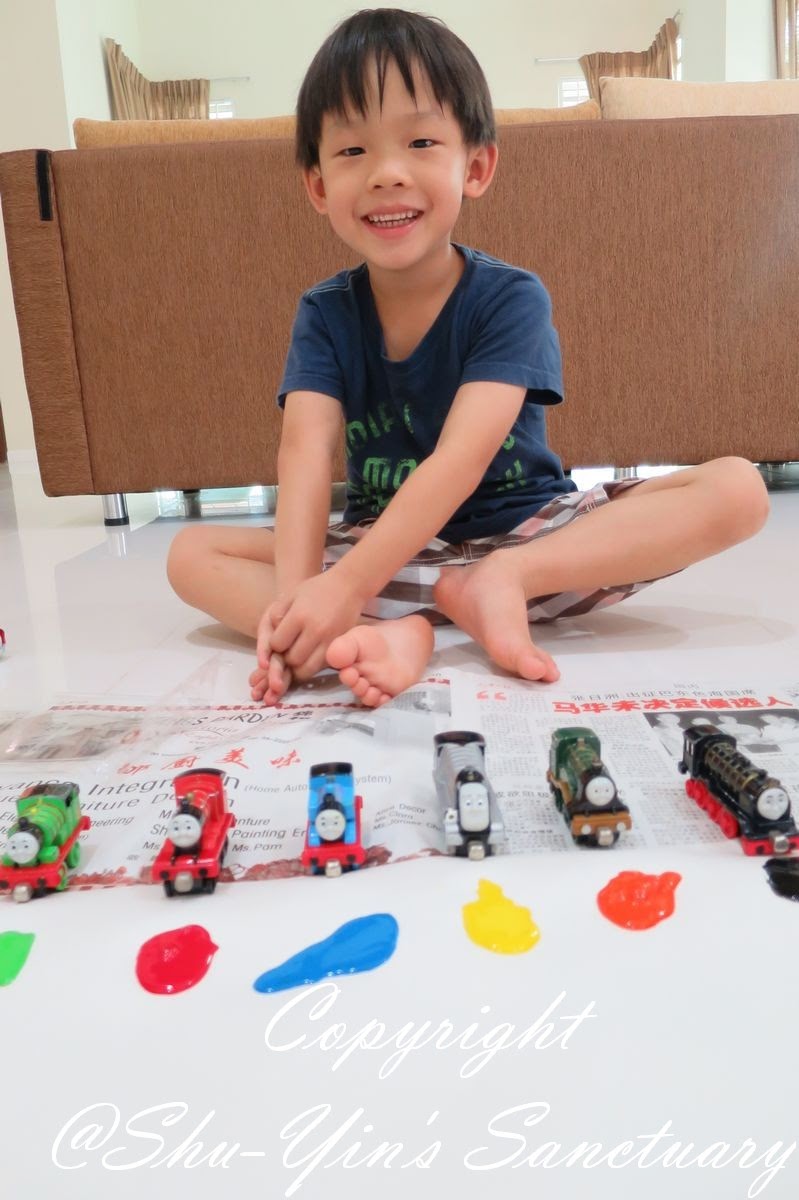 And next, Shern plopped his engines on top of the paint puddles. He had fun doing that and was looking at them intently. 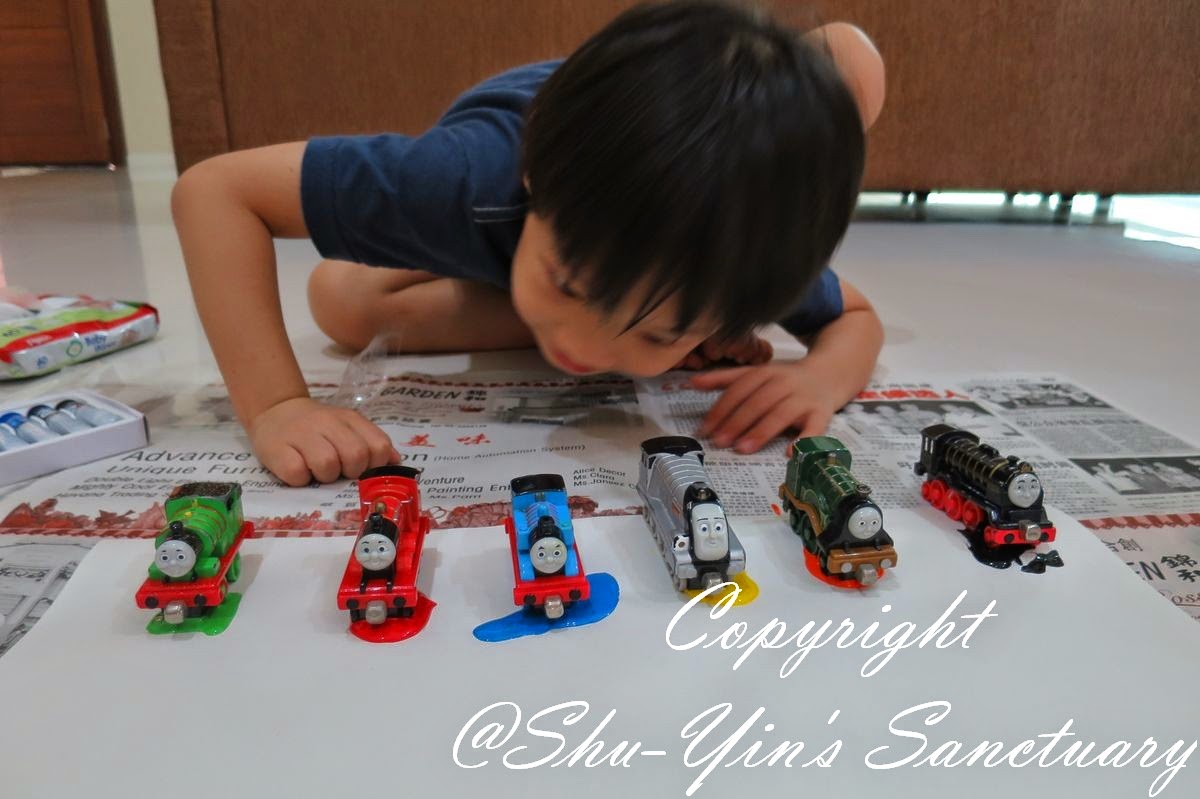 All his engines all revved up, ready to go. 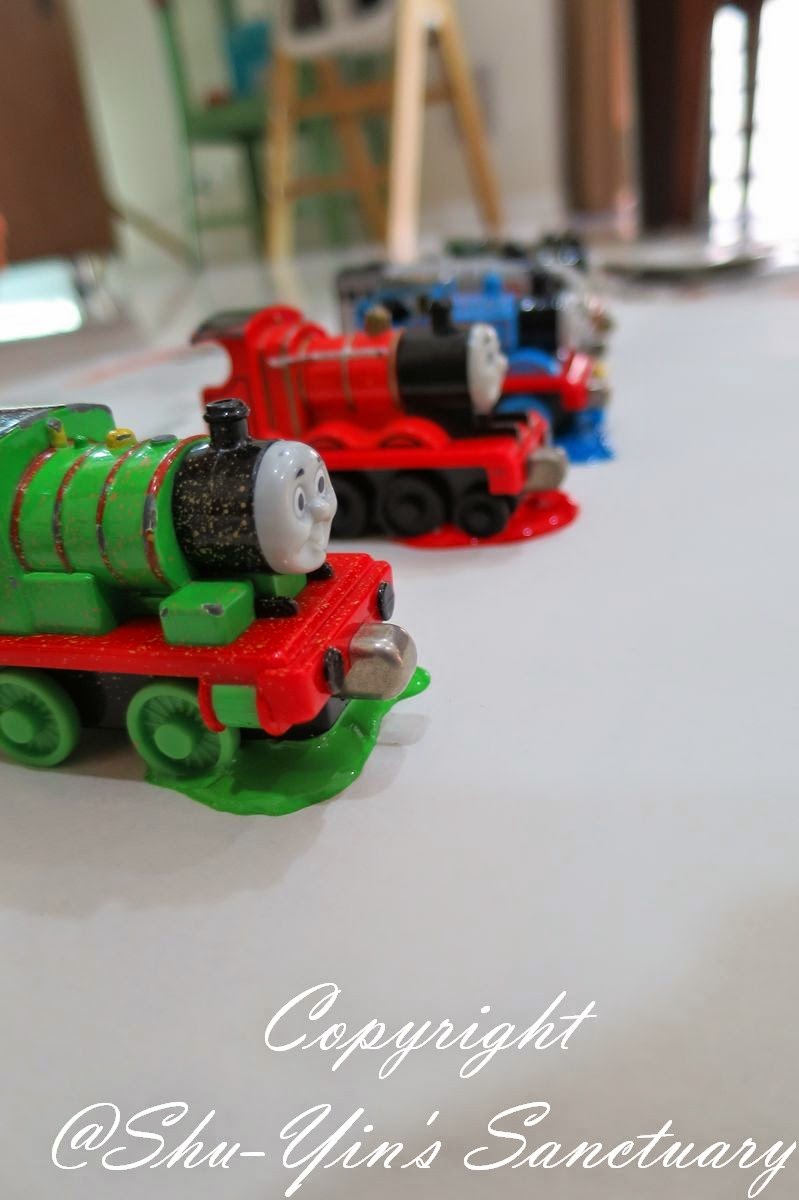 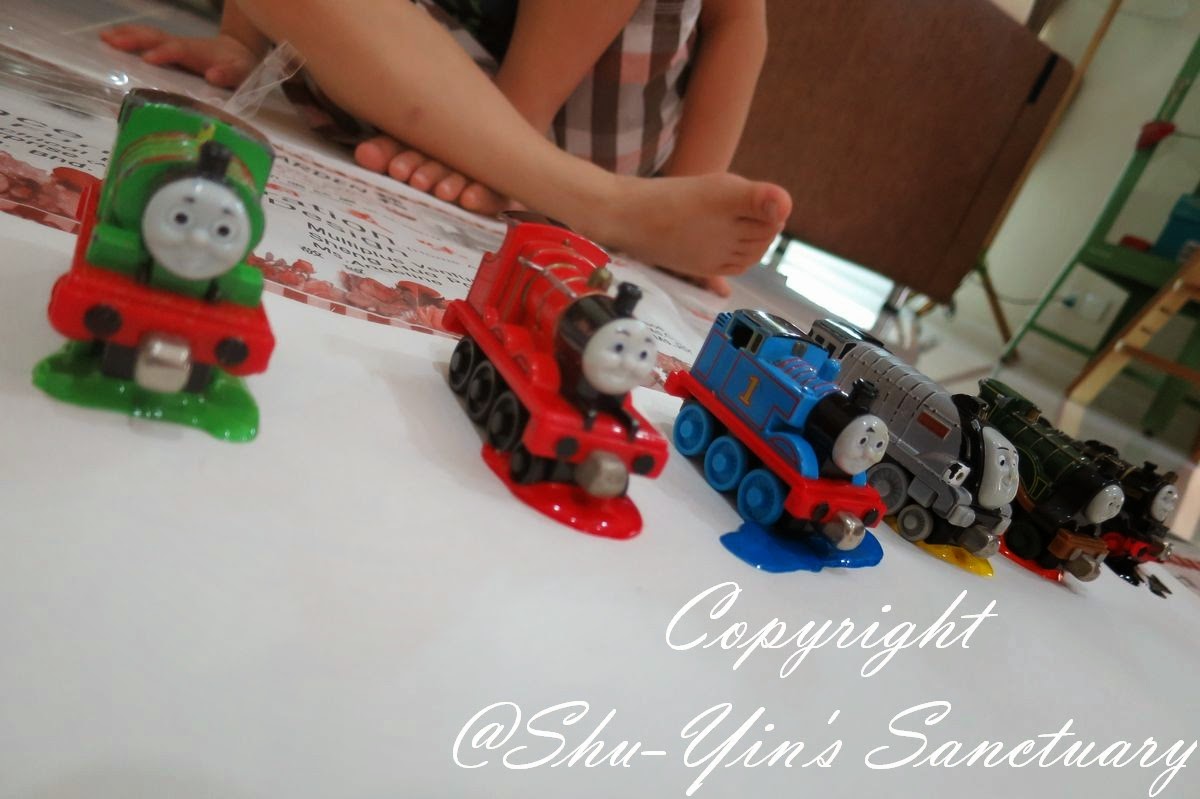 And then it was READY, GET SET, GO.....
Shern had so much fun wheeling and pushing the engines one by one.
He had fun seeing which directions they go, whether they were going straight or curved.
And he was making sounds and narrating his own scene and story all the way! 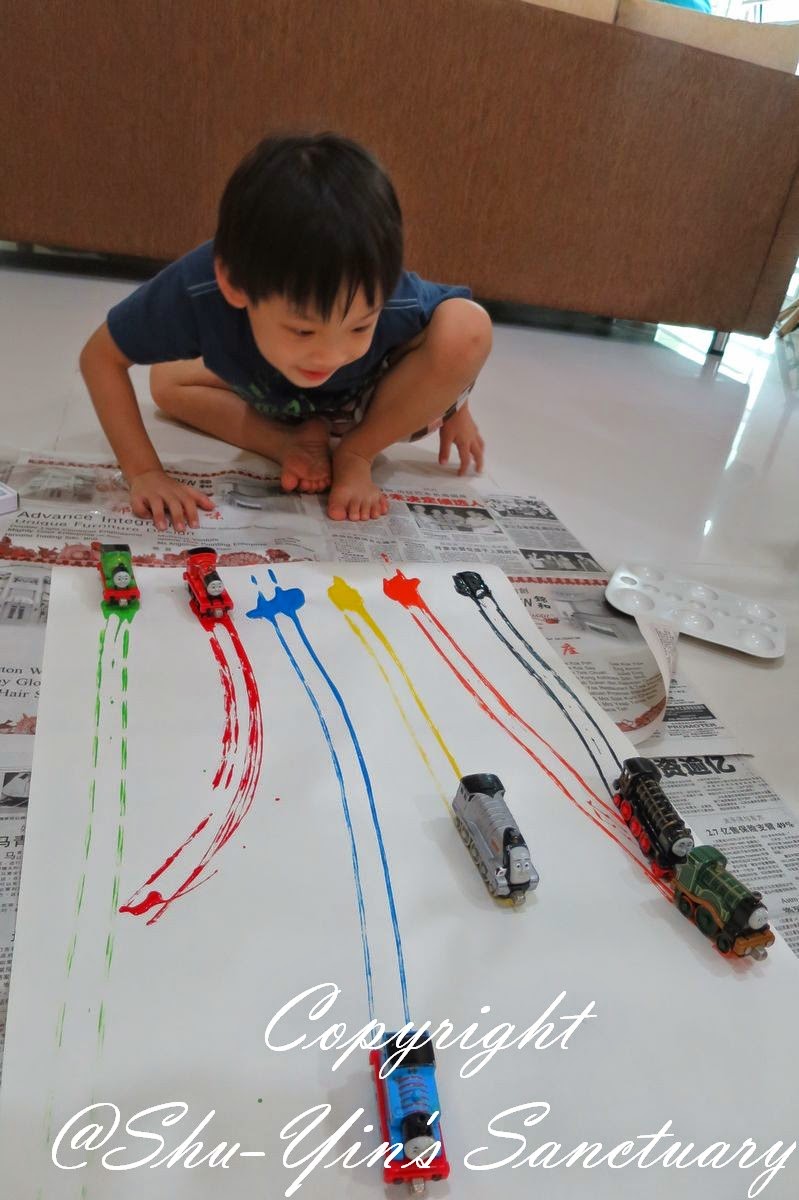 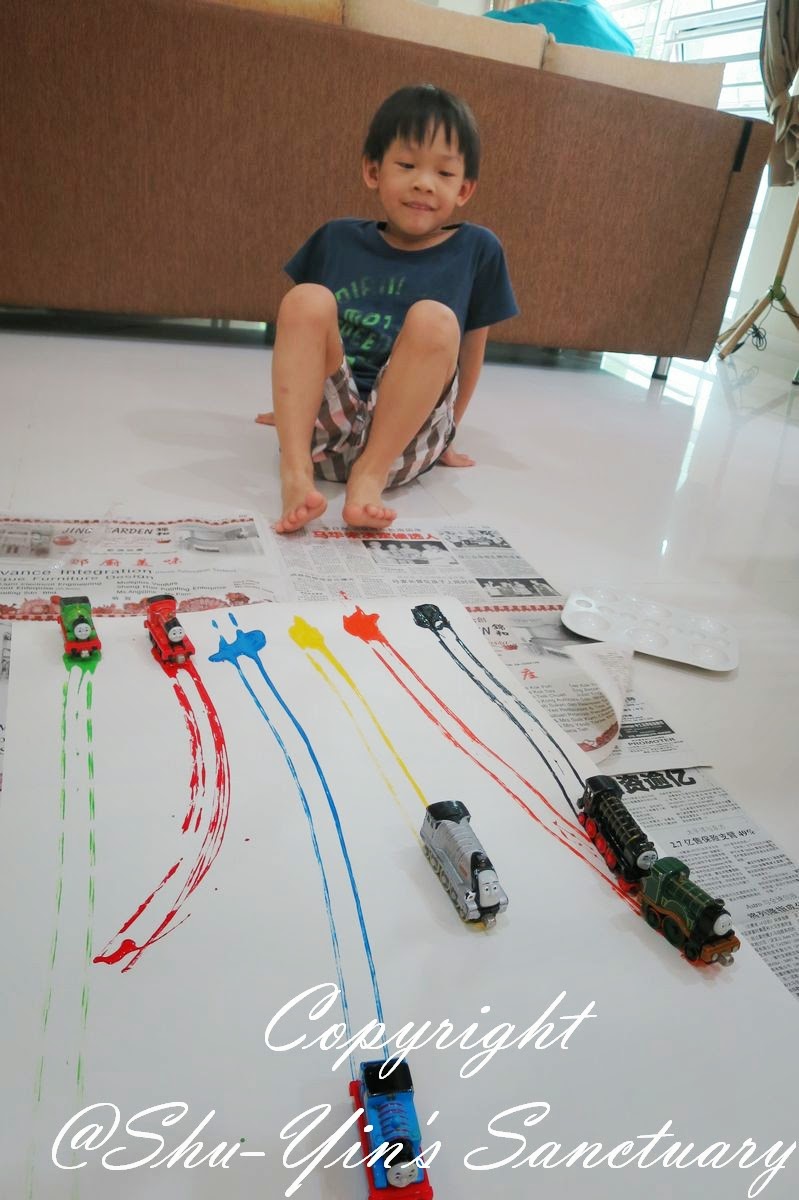 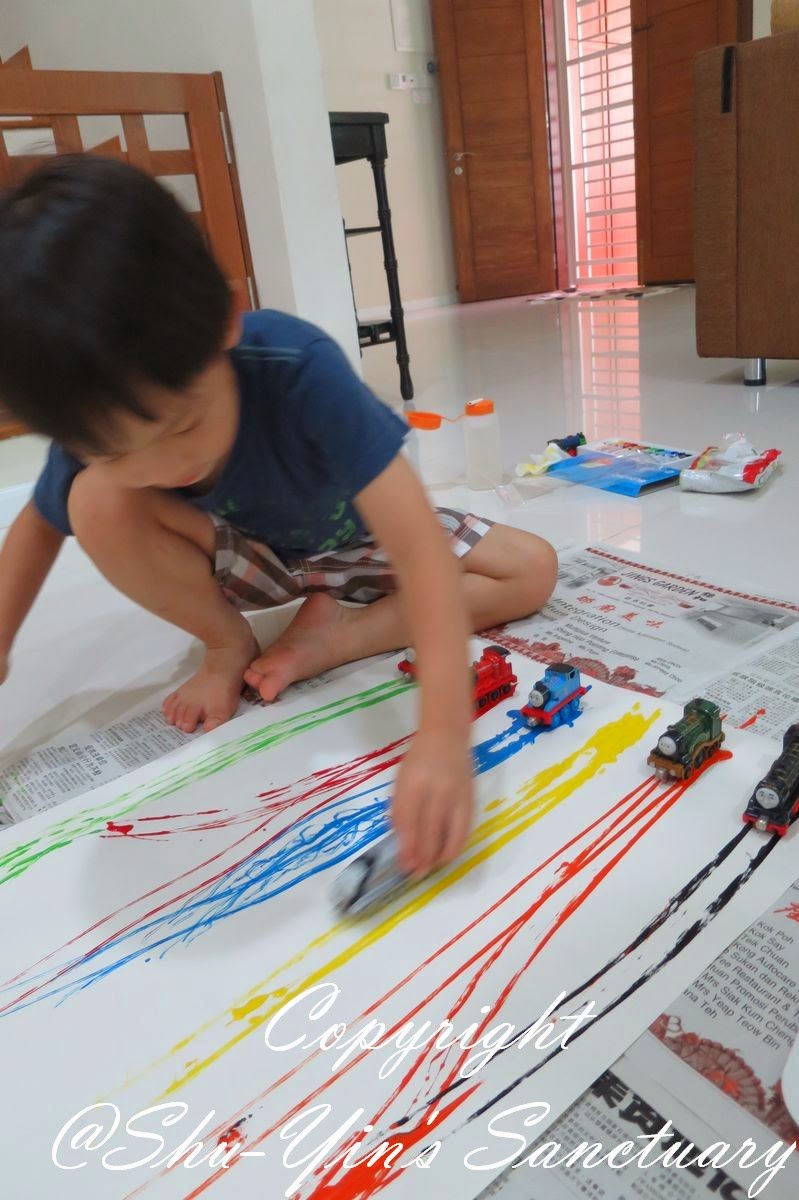 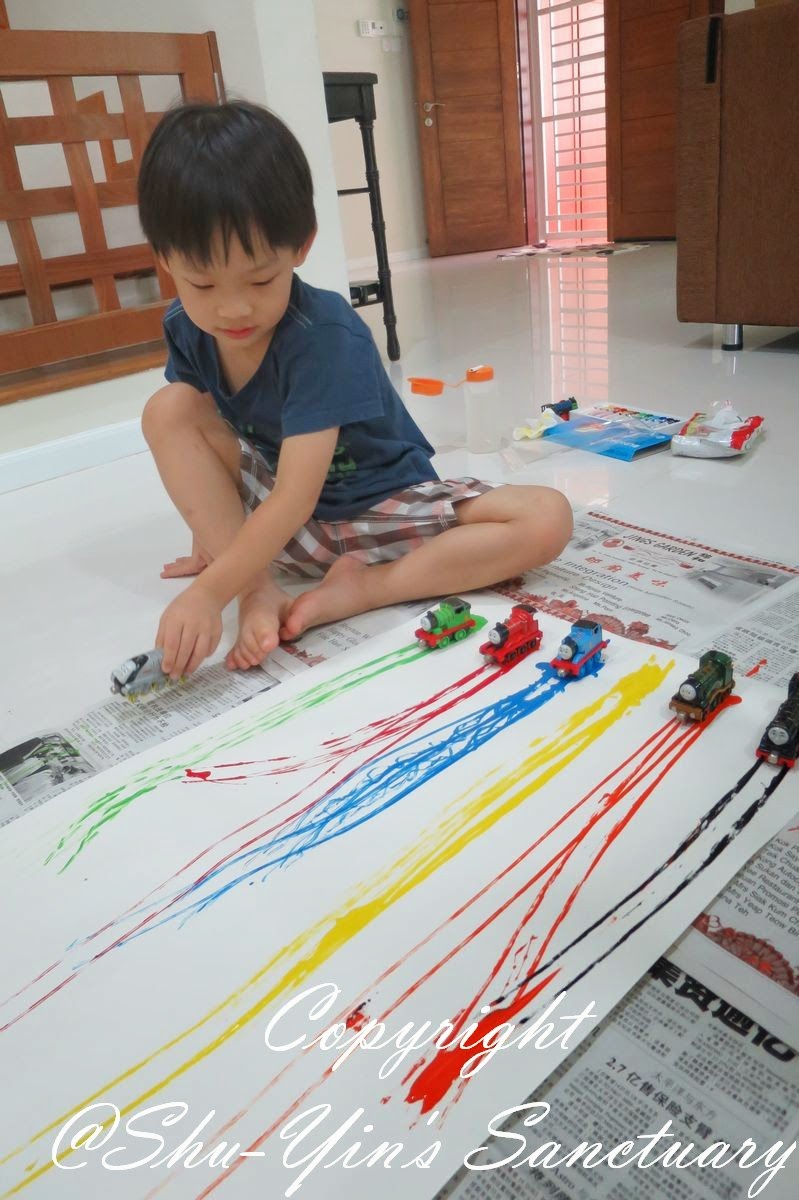 And then being my son, he has a bit of an OCD problem like me and he declared that he did not like the lines overlapping each other. So he wanted them to have their 'own separated railway tracks' he said, and he didn't want to mess it.
And so he continued to push the engines but with care, while creating patterns and designs. 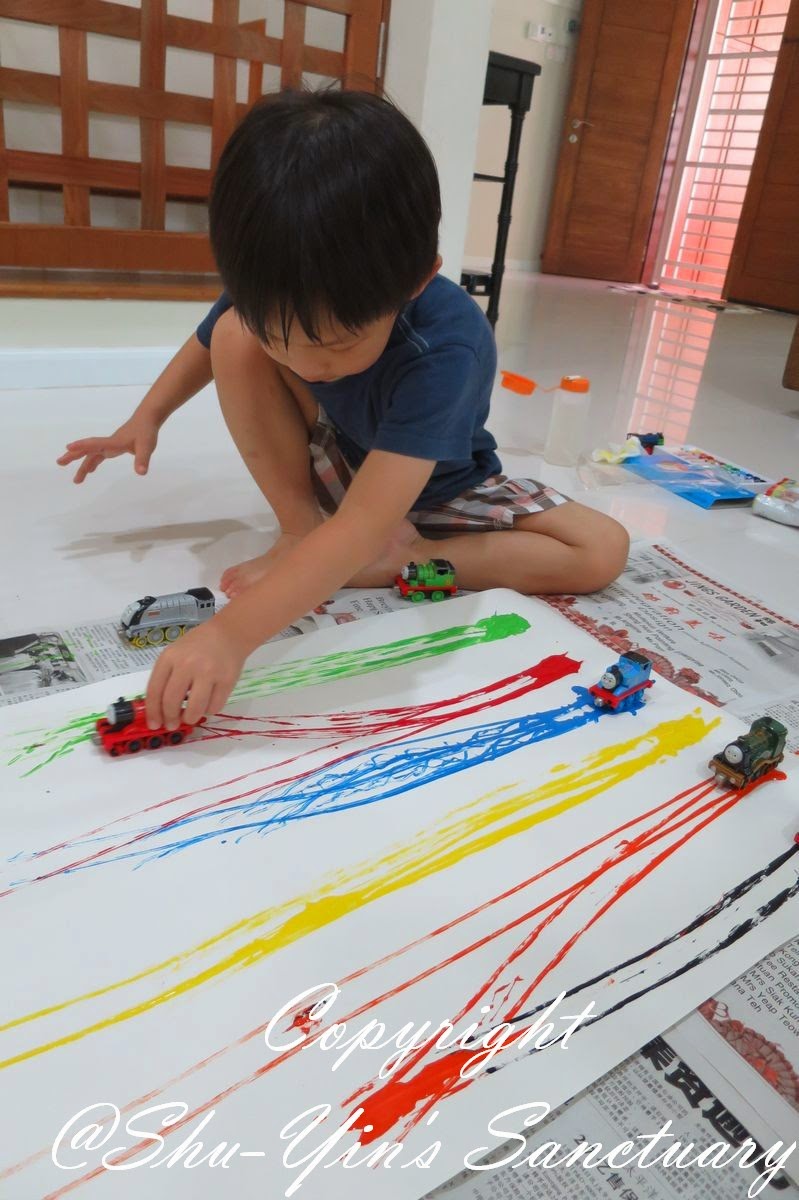 Now with more and more lines and patterns as his story and scene got more complicated.
I heard him narrating some 'race' scenes and how 'Emily and Thomas was a good and useful engine', blah blah. 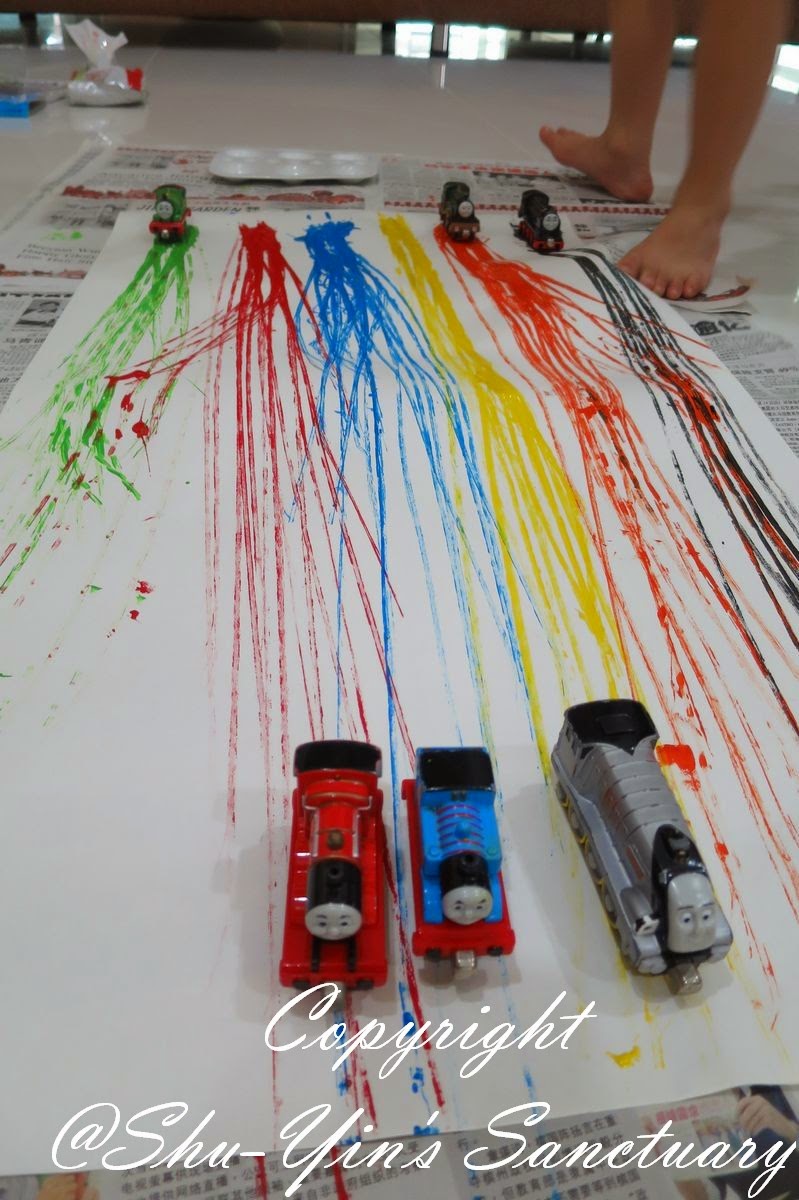 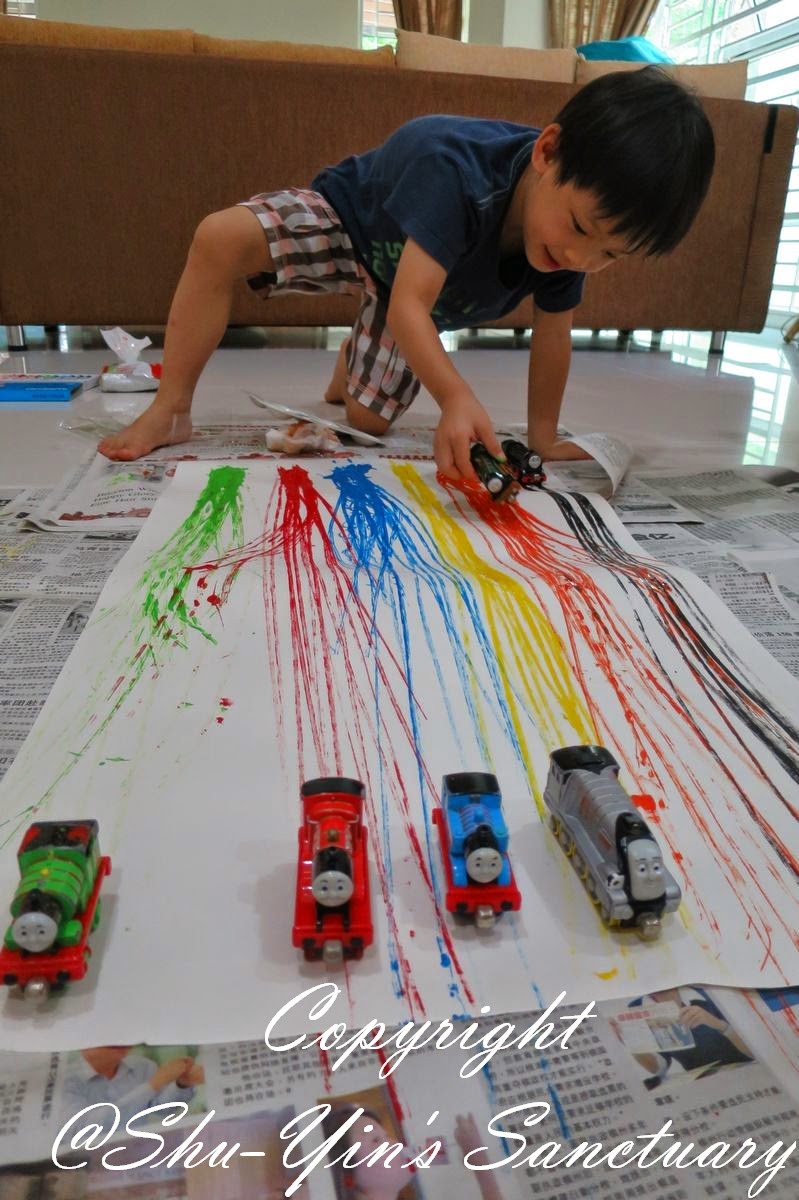 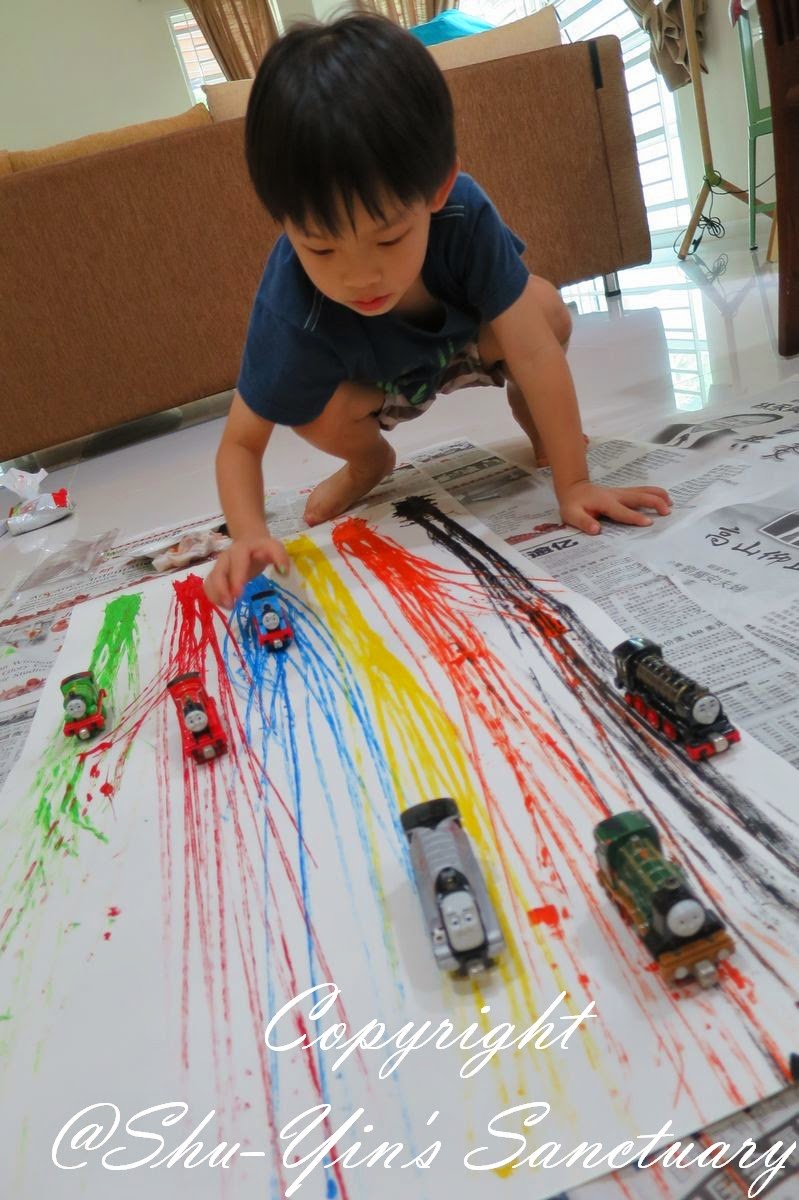 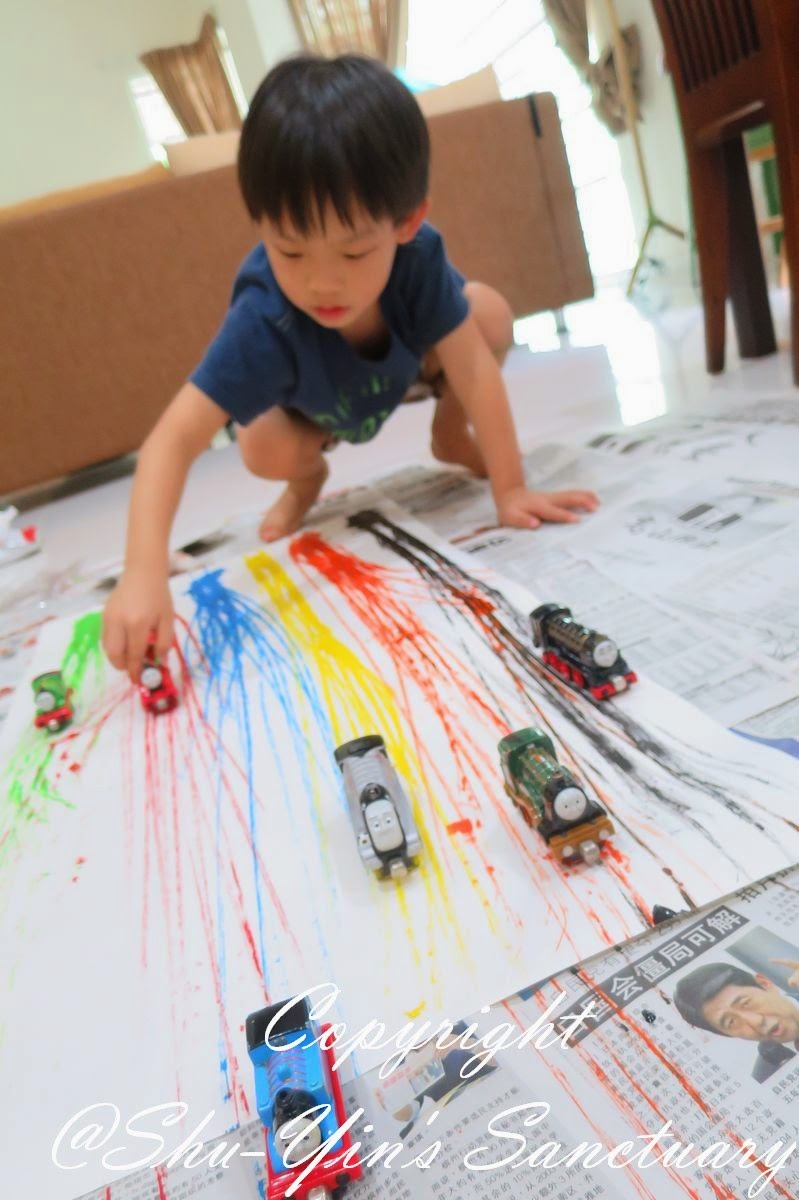 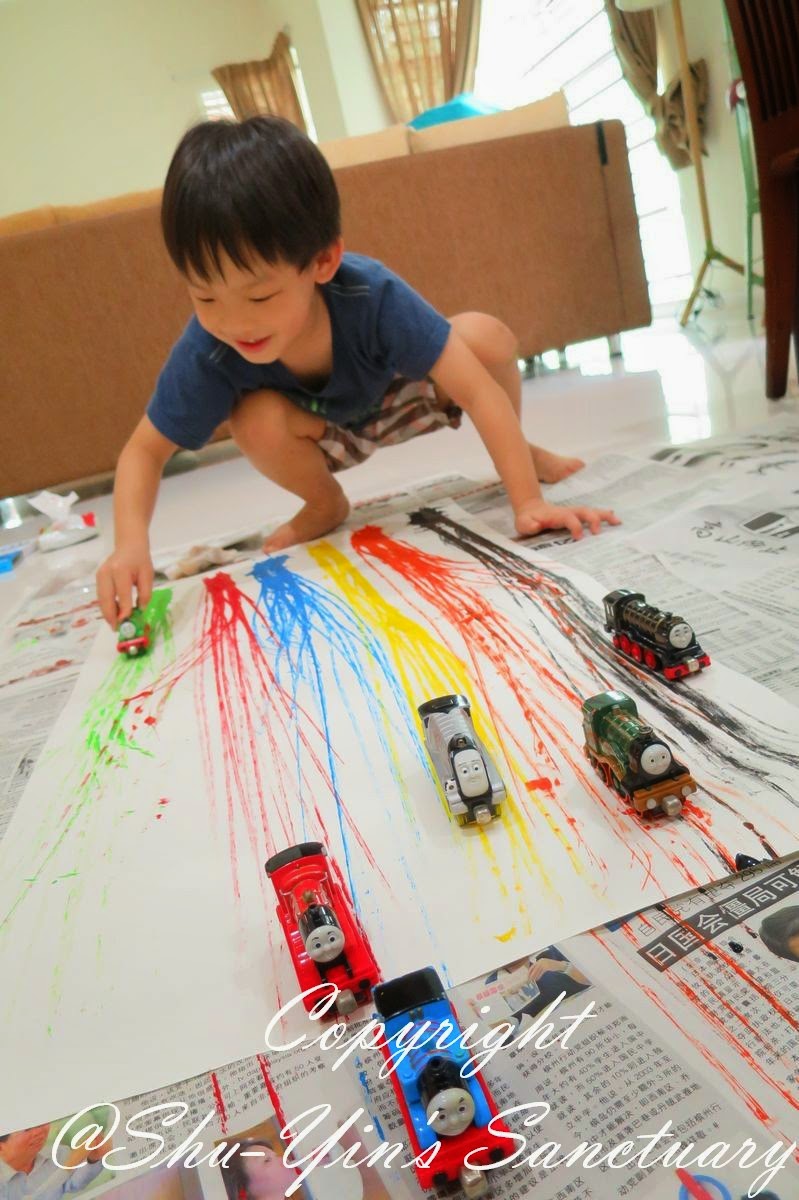 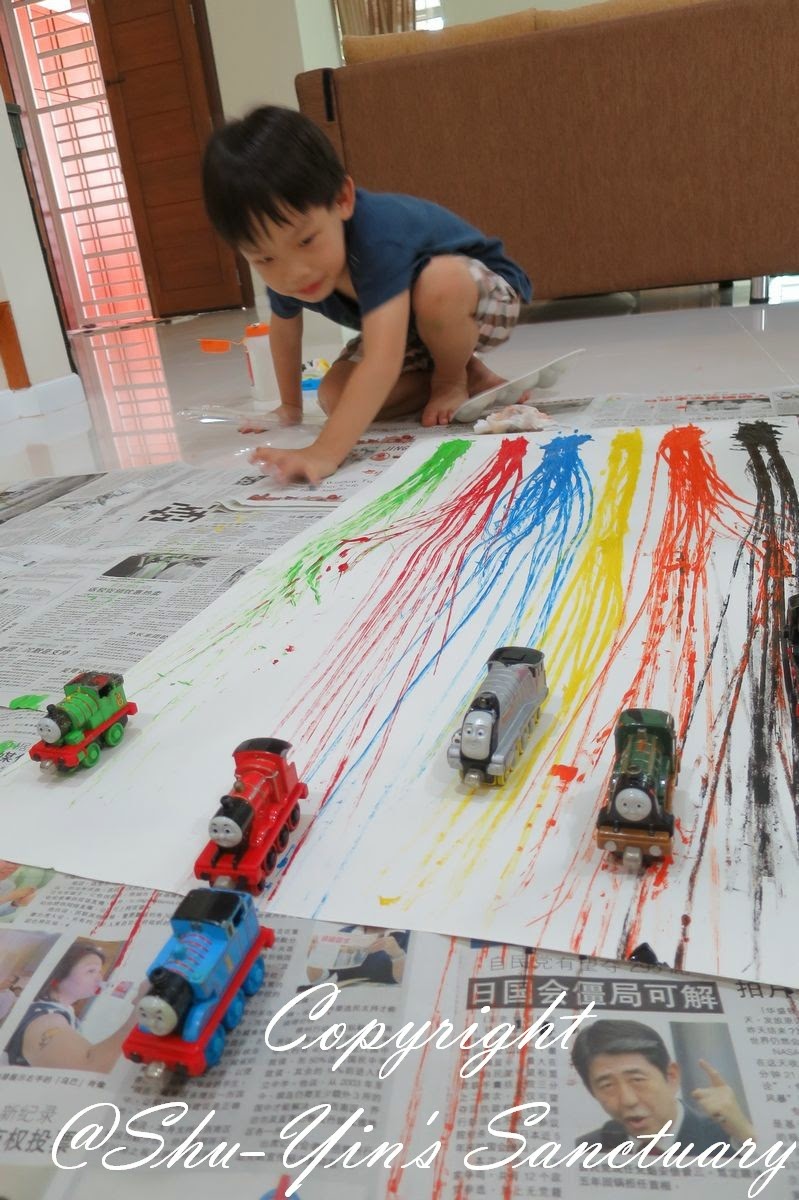 He certainly had lotsa fun! 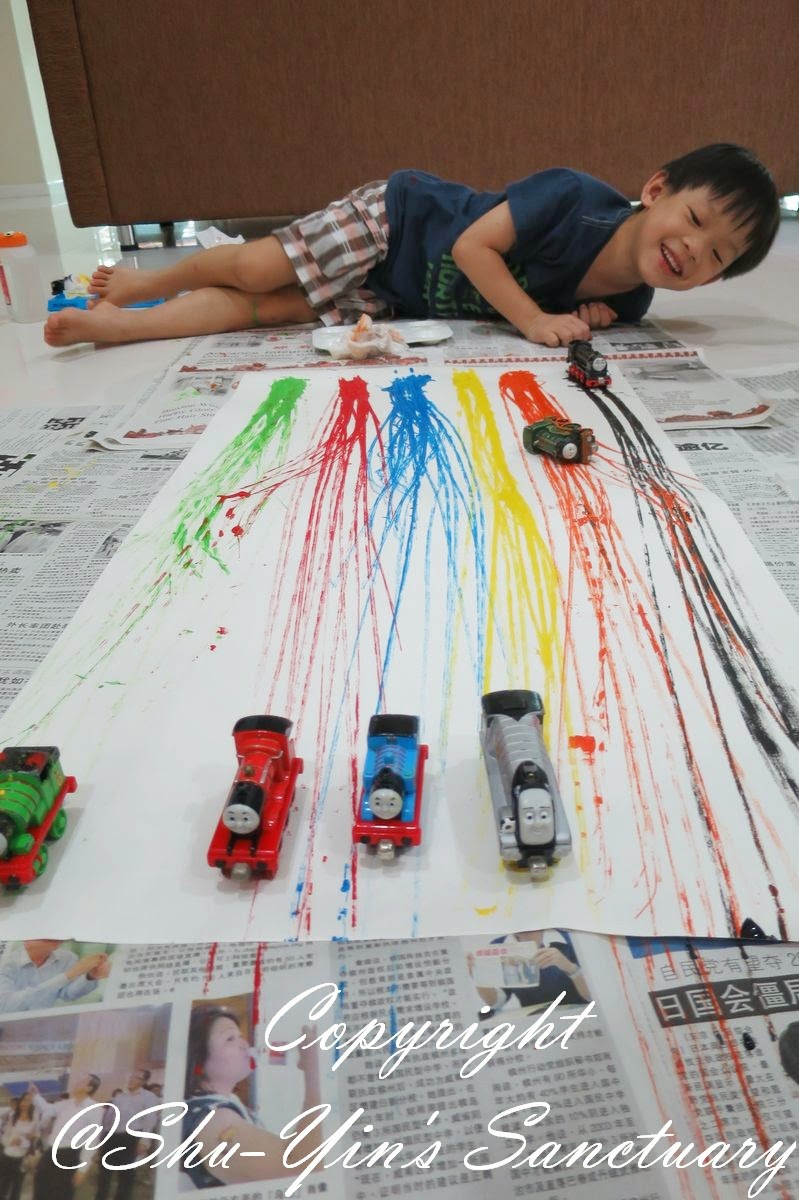 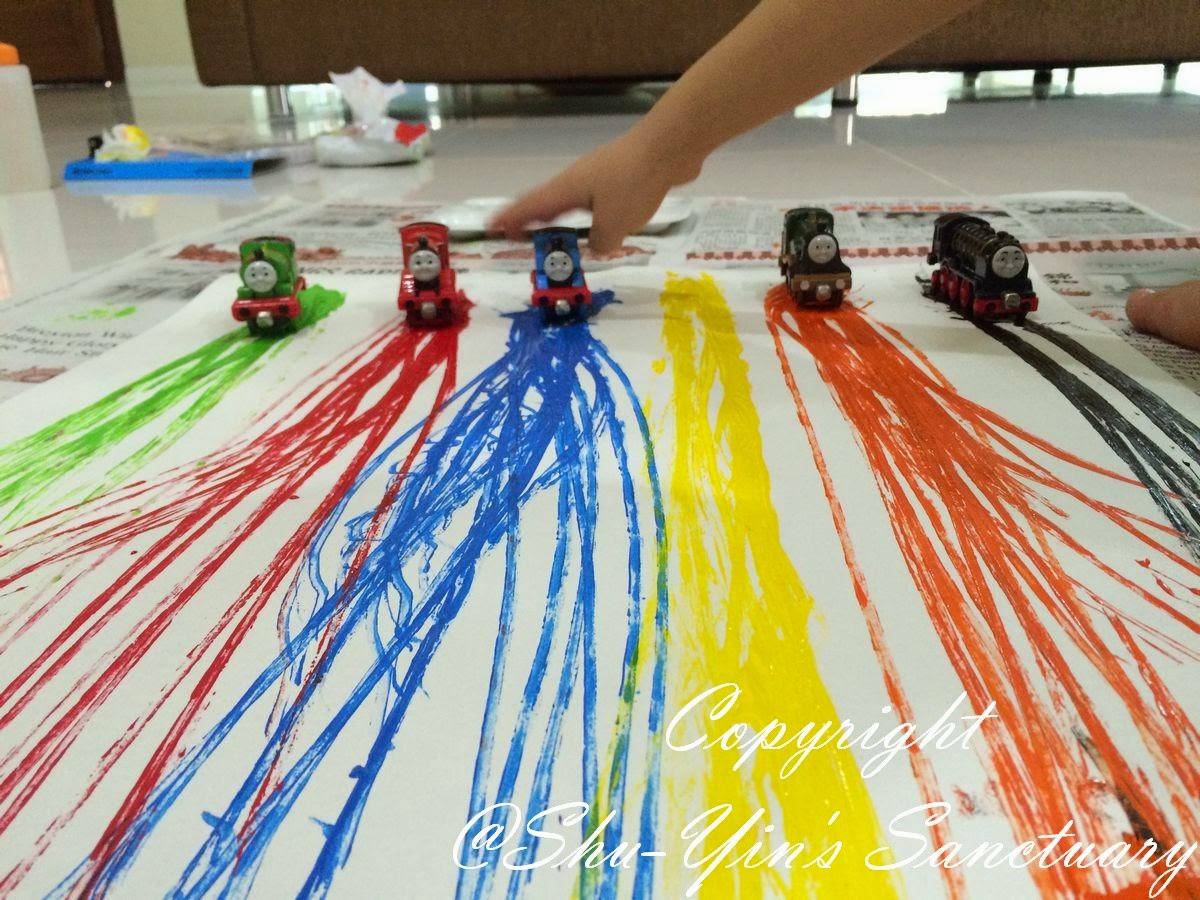 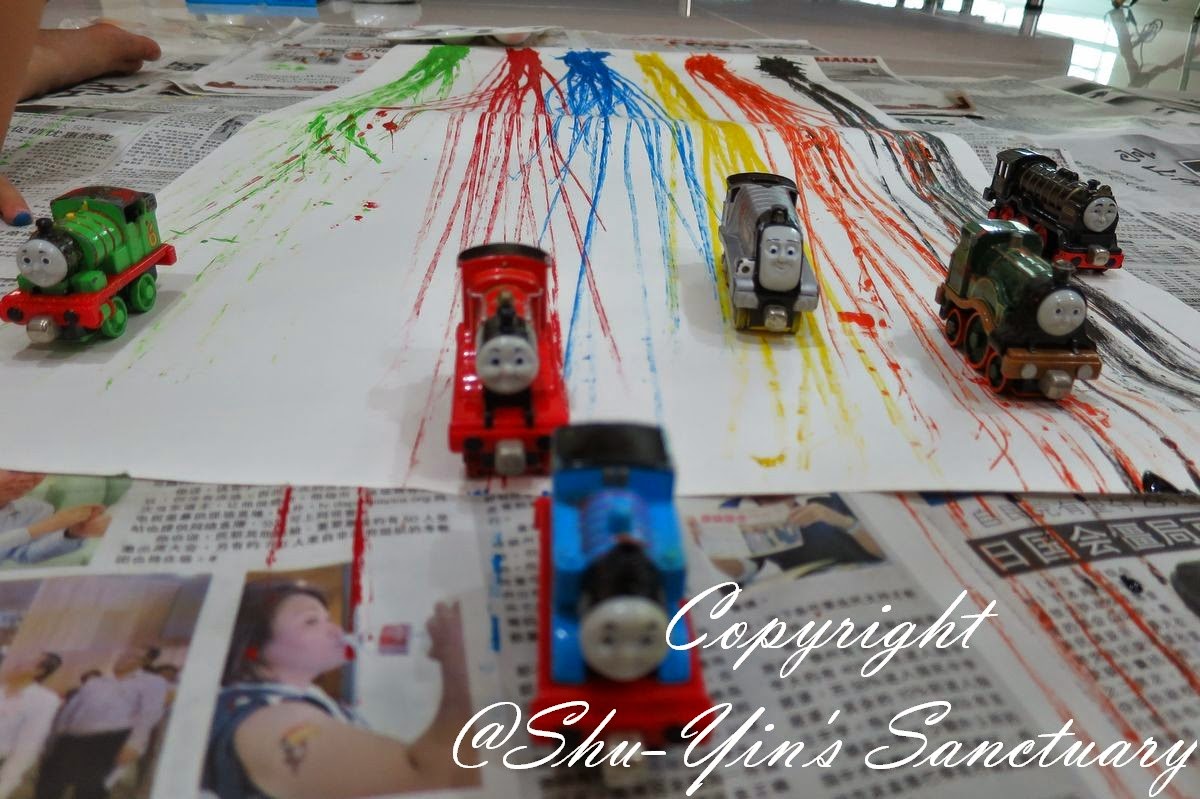 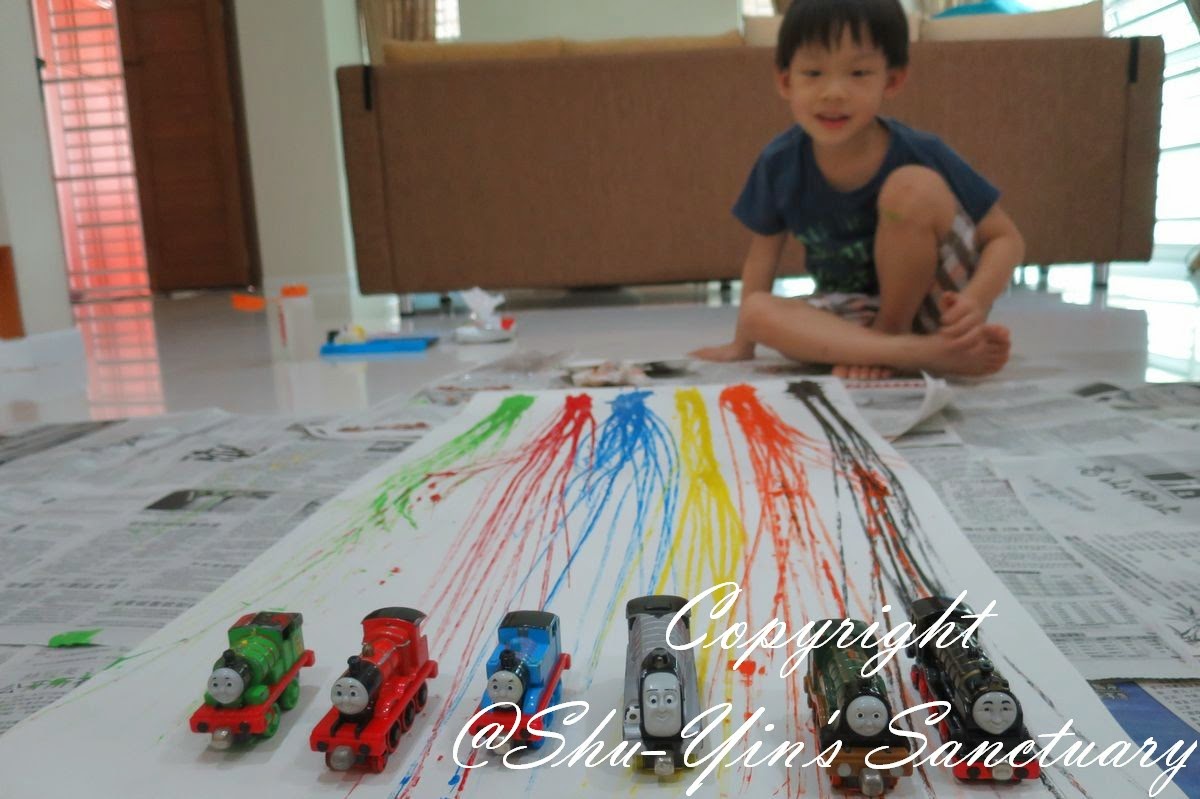 After about 30 mins this is the end product...tada....his masterpiece!
Careful, colourful long lines/railway tracks as he called them! 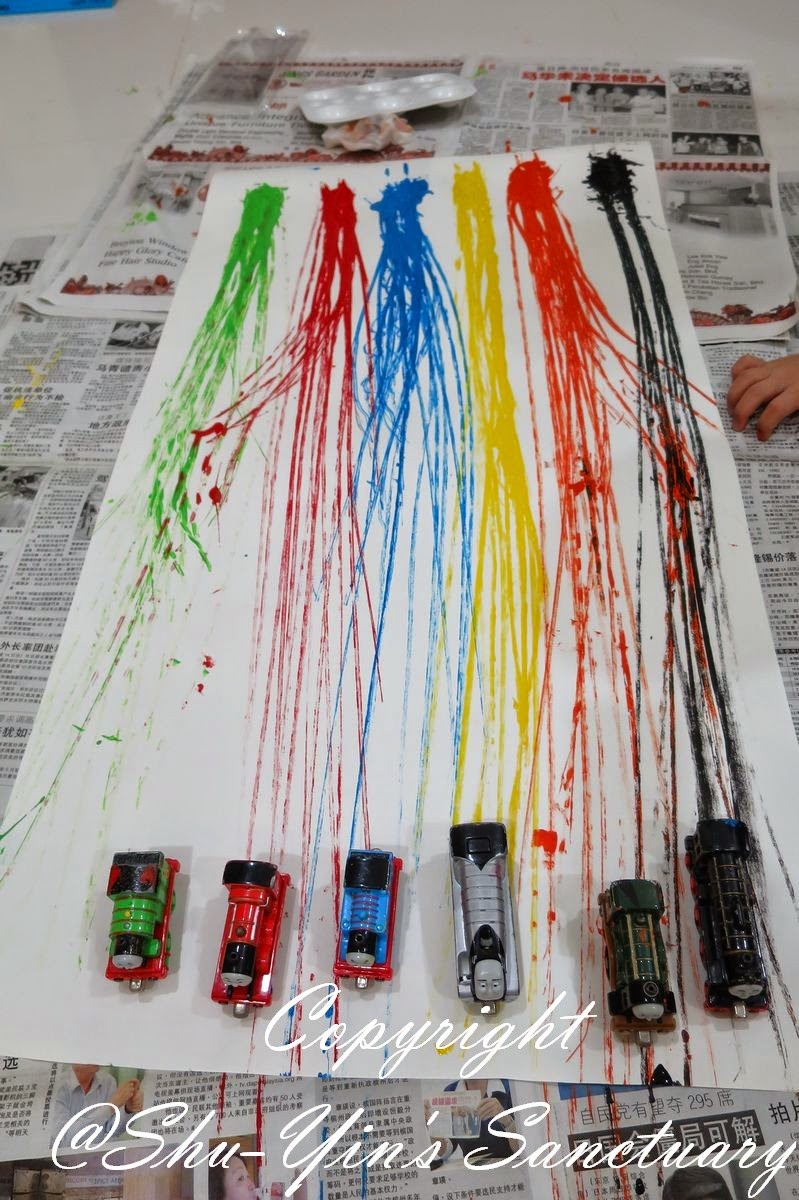 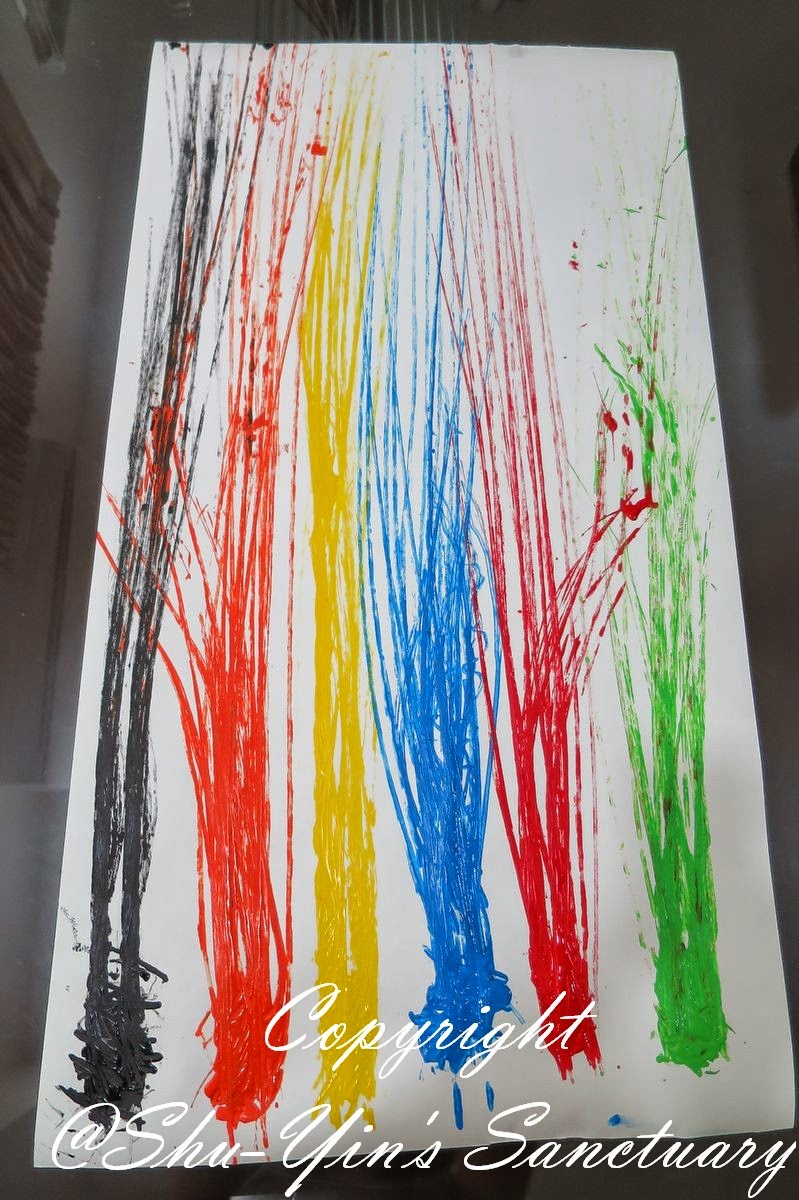 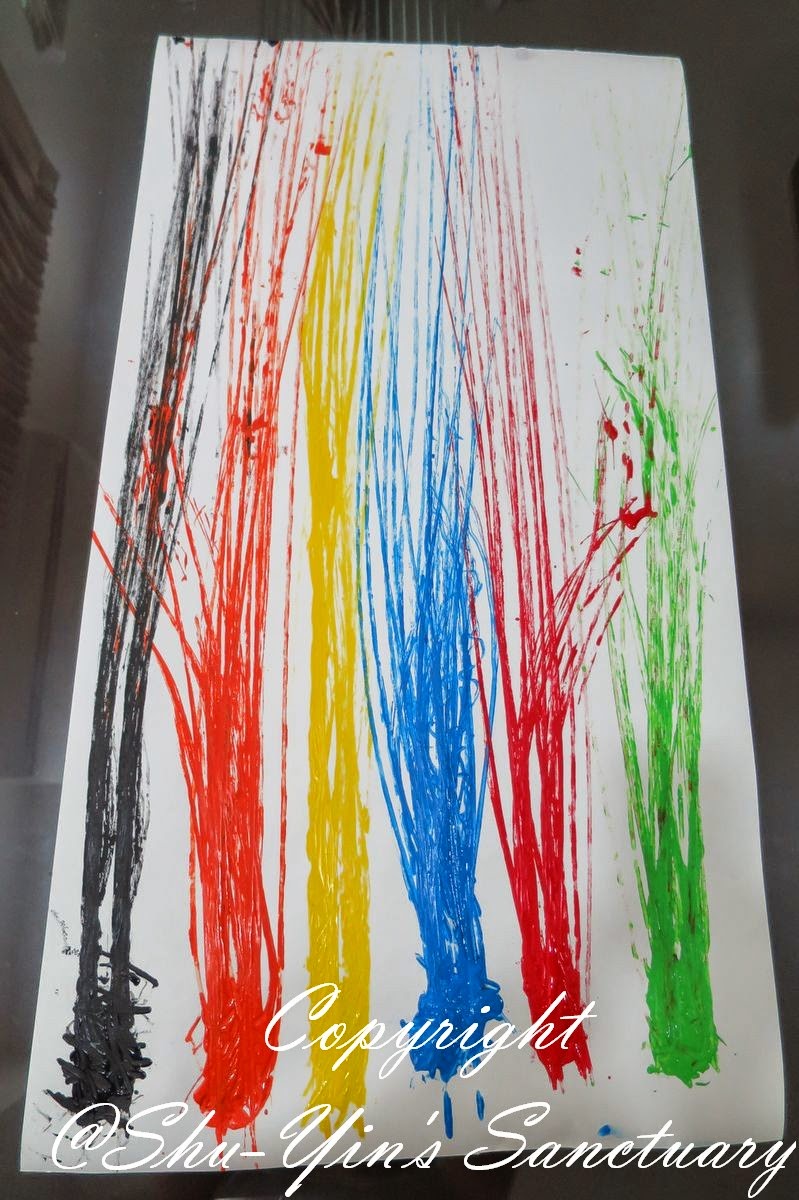 And after that, he went for a shower together with all his engines and a pail of soapy water.
He had another 1/2 hour of fun in the shower, narrating yet another scene with his engines, while I cleaned up the living room.

It is definitely an enjoyable afternoon for him indeed!
Hope you all had a crafty day with your kids too!