The above photo is one of my favourites. It shows a contented baby after feed. This motivated me to continue breastfeeding although I was in very much pain.
I was actually at the peak of my pain at Week 7. There was once I actually told my mum I didn't know if I could carry on. The pain was quite unbearable at some points. But I was glad I persevered.

To get my mind off the pain, I did my very first layout of Khye.
I did it when Khye was sleeping. Took me about an hour to finish this layout and I love it. Doing scrapbooking always lifts my mood and is a form of destress for me. I love to tussle with beautiful papers and crafts.

I caught Khye doing some min push-ups when I put him on his tummy. Too bad I did not take any photos of videos of him doing it. That reminds me to buy a new camera soon. My point-and-shoot Canon Ixus 110 IS is getting a little cranky lately.
I've been using my iPhone4 to snap photos lately, but when there is little light, my iPhone sucks!

Khye has been smiling quite often these days. It is relatively easy to make him smile. Just make eye contact with him and talk to him, and he will just smile back at you! 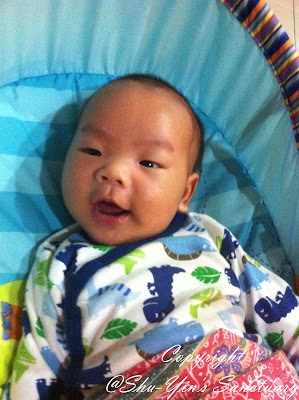 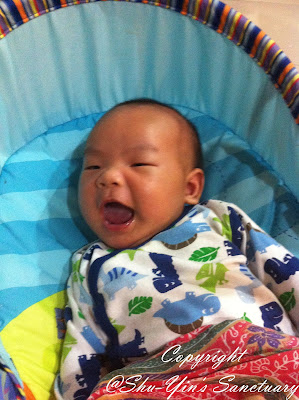 Very often Khye sits quietly in his stroller when we bring him out. When he is awake, he would look at Freddie the Dragonfly toy. He seems vert fascinated with it and could look at it for quite a long time. 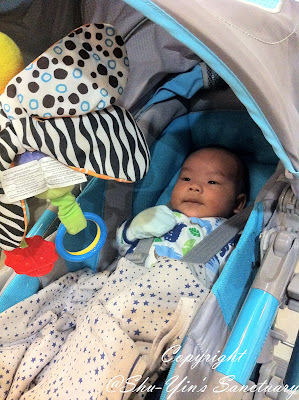 If not, then he would just close his eyes and fall asleep in his stroller. 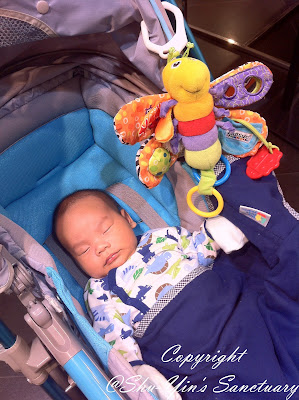 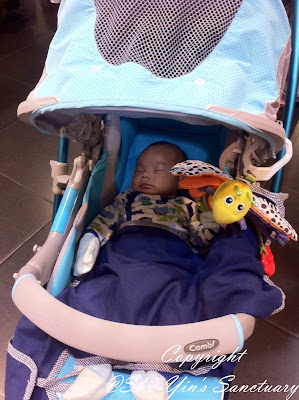 Of course at times he does make a fuss too. At that time, then I would need to carry him up and cuddle him for a bit. After he settles down, then I put him down in his stroller again.
So far so good for Khye sitting in his stroller, so he has been going out more compared to Shern when he was a baby.

I do bring Khye out quite a lot, especially in the mornings when Shern is in playschool. We go out for breakkie and I enjoy my time out with the little man in the house.

These 2 photos are of me and the little man at Starbucks, Straits Quay. 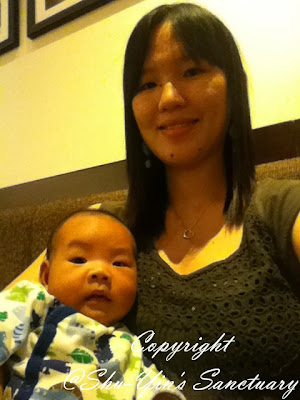 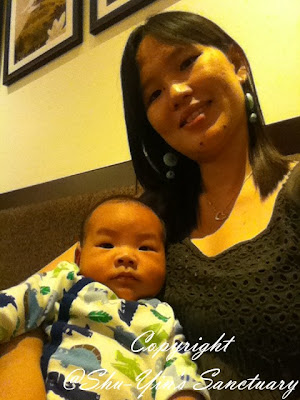 I would be very happy to see Khye yawns like this, especially when it is night time.
Basically Khye is not sleeping through the night yet. I do not expect him so as I am still breastfeeding him exclusively.After his last feed at about 11pm, Khye wakes up for feed about twice in the night, once at about 2-3am, and another time at 5-6am.