I bought the Avent Washable Breast Pads for RM51.92 after a 20% discount from Mum n Me. The reason I bought it was simply because I prefer that they were washable, rather than using disposables.


First impressions when I opened up the box was very good. They came in a small laundry bag which is good for storage and for laundry (although I hand-washed them). And 6 pieces are more than enough for me to wash and use. 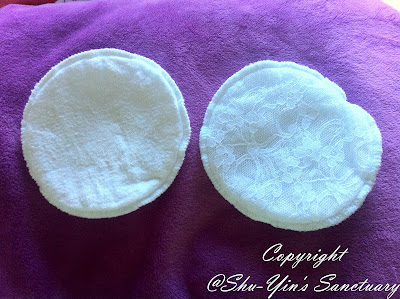 When I tried them on, I immediately felt the difference of wearing washables vs disposables. The soft-cotton lining feels very soft and non plastick-y.
The outer layer is with anti-slip lace which holds the pads in place when you are wearing them. I find it quite ok as they don't move about inside my bra.

Absorption was quite good and I had no milk leakage, but I am also not one of those breastfeeding mums who leak a lot. So I had no problem with it.

However, I quickly realized that when I wanted to take them out, they stick to my nipples. And when I tried to remove them, it was quite difficult and tricky to remove. I guess my milk leakage together with the cotton material, the pads stuck to my nipples!

I quickly googled about it and read in some reviews that other mothers are having the same problem as well. So it is not only me facing this problem, althpugh some mothers don't seem to have this problem.

I ignored it at first and just continued to remove them this way, although it was difficult to. That was until I had nipple tears and cuts. My nipple area became sore and there was once when I tried to lift the pads to breastfeed Khye, I pulled it too quick and because the pads stuck to my nipples, it tore off a layer of my nipple skin. Ouch!
It caused bleeding of course, and since the skin around that area is so sensitive, it hurts and caused me further discomfort.

I stopped using them for 2 weeks until they healed. Once everything was healed properly, I decided to give them another chance. I wore them again and although absorption was good, they still stick to my nipples and I had a tricky time to remove them very gently, because I was afraid of it causing my skin to tear again.


Conclusion:
Pros:
- Comfortable, and not plastic-ky feeling
- Absorbent enough for me
- Includes a handly laundry bag for storage and laundry
- Economical

Cons:
- It's inner cotton material sticks to my nipples
- Quite bulky, and very visible when wearing a thin bra/top


So, what do I say about these Avent Washable Breast Pads? Nay, they don't work for me. And although they are washable and more economical, and environmental friendly, I'm sticking to using disposables from now on, until I can find other brands of washable breast pads that don't stick to my nipples.