Yesterday night at around 8.15pm, Shern had an accident in mum's place. He was running very fast and he he accidentally tripped. Unfortunately, his hands was holding a toy car (the red thing in the photo below) and he fell knocking his head on the car.

10 seconds later, you could see the swell in his head. A really swollen bruise. Purple and huge.

Shern was still crying 'pain pain' even after I went to comfort him. It must have hurt him a lot, for he usually cried only a while whenever he falls down. 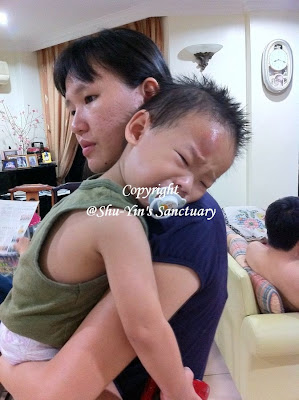 30 July 2011
Look at the bruise.
I just noticed that Shern was still holding on to his red toy car. Haha. 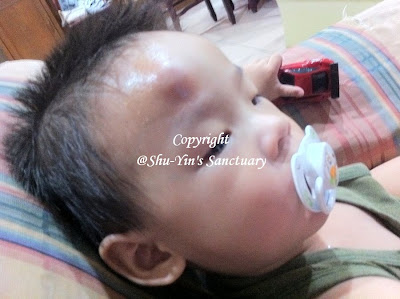 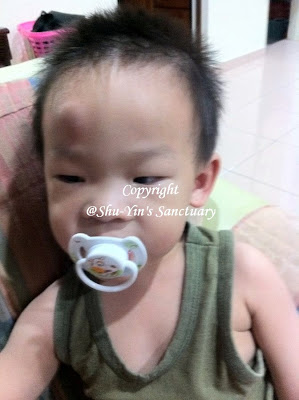 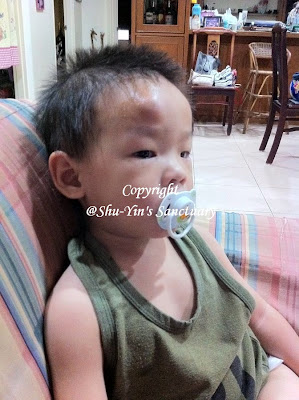 30 July 2011 - (photos taken using iPhone)
About 1 year ago, I caused Shern to fell out of bed and his forehead ended up with a swollen bruise. It had taken about a week for the swell to go down then.

It is because just the next morning, Shern's swollen bruise has subsided. Look at his head. Just a teeny little bump left. And a slight blue black. Isn't it a miracle gel ? :)
But overall, Shern is definitely feeling much better now. 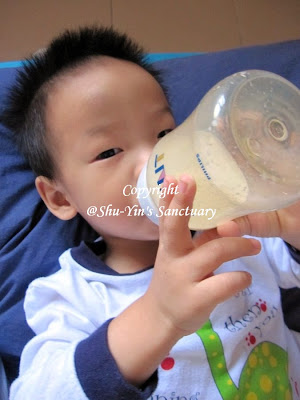 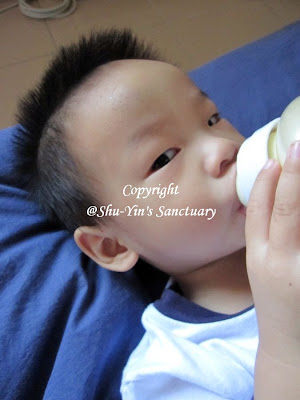 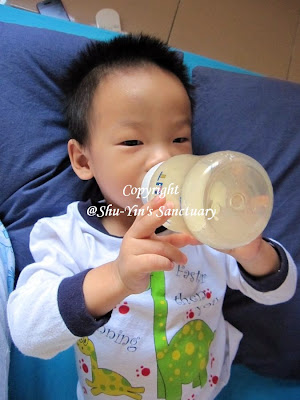 ouch! that really is one nasty bruise. But that gel is amazing. Must hunt one down to keep in our first aid kit. Not just for nathan, but for me... I am one of those people that bruise easily!

haha. Yes, this gel is really good. Ive used almost a whole tube of it (small tube) coz Shern is always bruising himself one way or another. But this swollen bruise is the worse. And this gel works even for this huge bruise!

My 2nd girl always have bumps like such whenever she falls and hits her head. Sometimes she has one on each side of the forehead. Seeing those bumps made me realise the bumps on cartoons were actually true because I've never seen such things. Really like half an egg stuck on her.
But my elder girl never has bumps if she ever falls.

Ouch..must be very painful.I support this brand also...it's a saviour items to both parent and children.

Wendy....Shern seldom has such big bumps. Small ones yes. Big ones only twice. Once coz he fell out of bed, head down when he was about 1yo and second time is this. :P