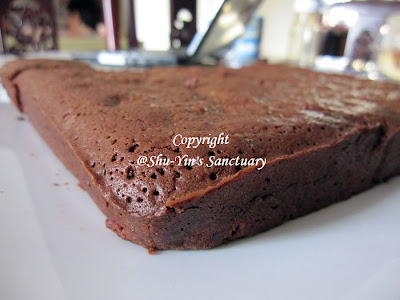 20 July 2011 - Chocolate Rum Brownies
Another marvelous recipe taken from Ju from The Little Teochew. Her recipe never seems to fail me. If she says it is nice, it is always nice. I always have great confidence when I tried out the recipe she has tried. Well, unless I tweaked the recipe too much!

This time, I followed almost exactly to the recipe. Besides the fact that we used different brands of chocolate and I reduced a little sugar because I was adding mini chocolate chips into the batter.

As usual, brownies recipes are simple and this one proves the same. It took me just 15 minutes to prepare the batter and about 25 minutes of baking time. 40 minutes later, the brownie is out from the oven for cooling. 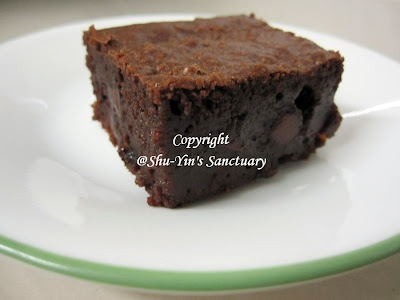 I simple could not wait for it to cool before I cut them into bars. So while it was still warm, quite warm actually, I cut them. We ate a few pieces over at my mum's place. Everyone says they are simply delicious.

However, I only managed to take some photos of the brownies late at night because I forgot my camera. So below photos are all taken without natural sunlight. Just the fluorescent light in my kitchen. 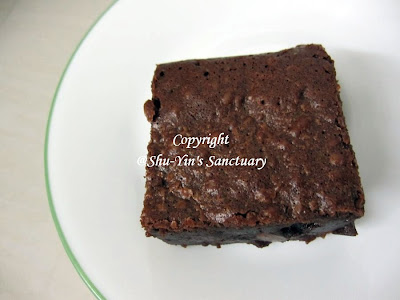 The brownie is dense and heavy. I could certainly feel the weight of it when I transferred the brownie to my mum's house on a plate. A thin little layer but weighs more than it looks.
And the texture is a little on the fudgy side. Most definitely for chocolate lovers. The top crust of the brownie is crisp. 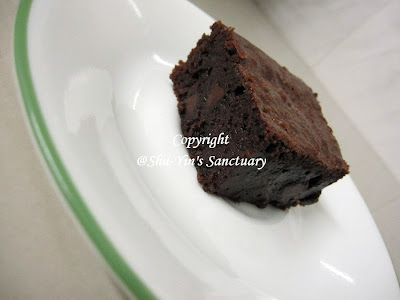 I love how the rum gave the brownie an oomphh. And the raisins added some chewiness in it. The chocolate chips also also added some chocolate bursts here and there when you bite into it. Really lovely. 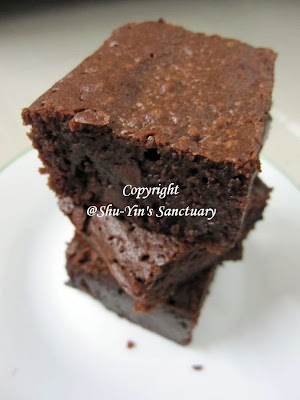 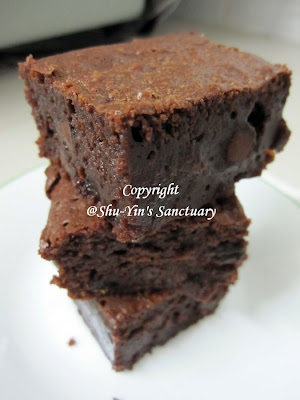 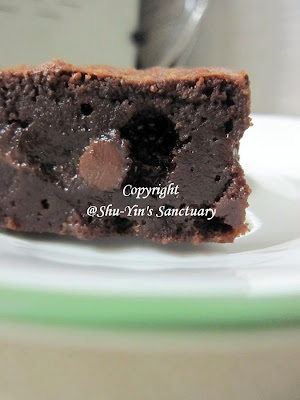 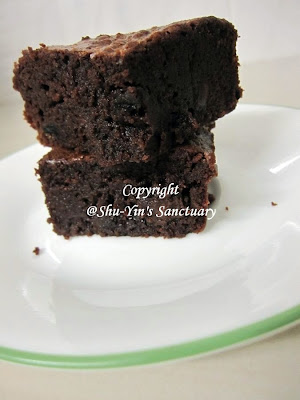 Try it out. I love this almost as much as David Lebovitz's Cheesecake Brownies. This is much simpler and a little less decadent without the cream cheese. :)

1. Melt all ingredients in a pot and stir constantly under a low fire. You have your chocolate mixture. Allow to cool (you should be able to dip your finger in and not get scalded).

2. Put all ingredients in a bowl and beat with a whisk. You have your egg mixture.

3. Now, add your cooled chocolate mixture to your egg mixture and stir well. You have your brownie batter.

4. Now, add your flour, raisins and chocolate chips to the brownie batter. Mix well to combine. Pour the batter into a shallow (rectangular or square) tin lined with baking paper and bake at 180°C for about 15-20 mins (mine took 25-30 mins), or when a skewer inserted into the centre comes out clean.