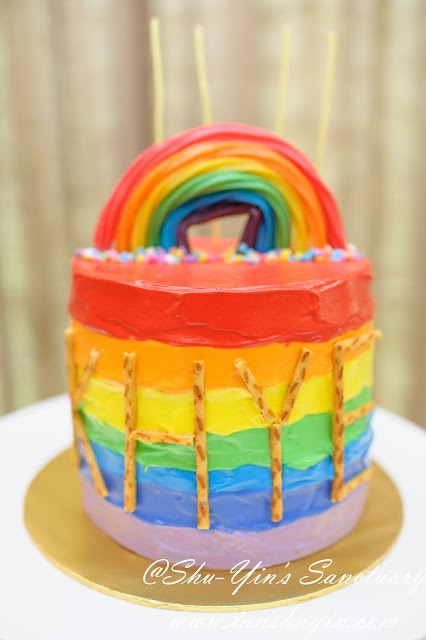 We celebrated Khye's 4th birthday early this year, before some of our family members went traveling.

And this year, Khye specifically requested for a rainbow birthday cake. He actually asked for this more than 6 months ago. So when I asked him again just a month ago and he told me the same thing, I knew he really wanted it.

As usual, I know ordering a custom rainbow cake will be very expensive, you know the fondant kind. And so I decorated it myself according to my prince's wishes and also to save cost. I'm not paying hundreds of ringgit just for a cake. Yes, I am kiamsiap.

I requested Cheryl from The After Meal to cream the cake with rainbow colours on its exterior sides of the cake, and the rest I would do it myself.
She did an amazing job!

I initially wanted to just put colourful M&Ms for the rainbow but Khye told me he wanted a rainbow that can 'stand up', in other words a 3D rainbow. Oh my, I have some serious thinking to do here.

After some googling around, I found that there is a type of licorice candy, called Twizzlers, which comes in rainbow colours. But the problem was this candy was nowhere to be found in Penang. I tried Cold Storage and Jusco and some candy shops but nope, they didn't have it.
I googled and found that a candy specialty store in KL and Singapore has it.
And my dear friend Seow Wei who happened to be coming back from Singapore bought it for me! Yay!

So this is the Twizzlers. It is actually a yucky, rubbery candy. lol 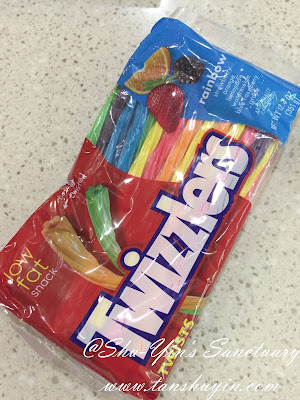 Armed with it and some toothpicks, I did my magic on the cake. To make it curve and stand, I poked toothpicks into the Twizzlers on the sides and also on the ends of each Twizzlers. 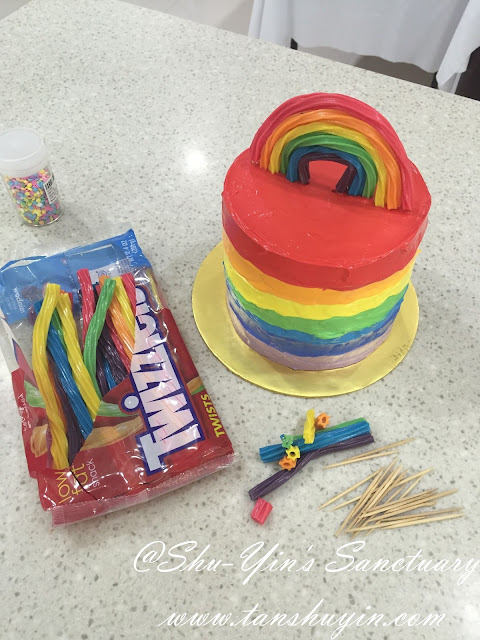 Sprinkled some colourful confetti candies on the ends of the rainbow to hide some imperfections.
And because the cake was already too colourful, I used Pretz sticks to make the word K H Y E instead. 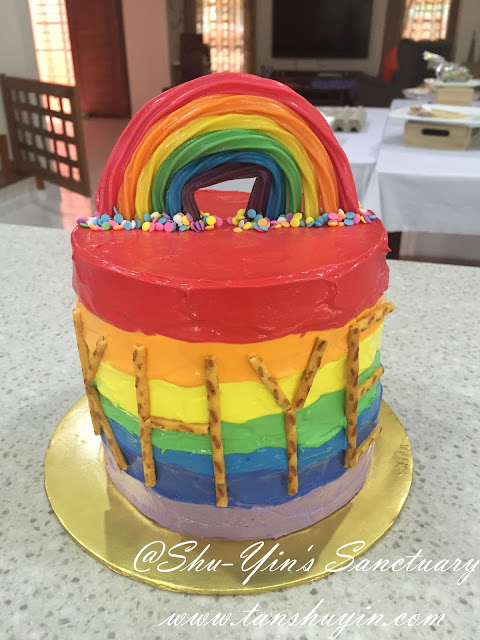 I didn't have the number candle so I use 4 thin and long candles instead, and then we were done!
Tada.....a very awesome one-of-a-kind Rainbow 4th Birthday Cake for Khye!

Even if you are not a baker, or you are not a fan of fondant cakes like me, then this is for you.
It is fun, economical, one-of-a-kind and awesome to transform a plain cake into something nice and meaningful and according to the theme.

Please click below for more inspirations on how I decorated my kids birthday cakes throughout the years.