Speech & Vocabulary
In this category, Khye has improved tremendously, since he started talking after 2yo, with him repeating words after me at 25 mths, cheekily calling me 'money' instead of mummy, and knowing and reading numbers at 2 yrs 3 mth, and then recognizing the alphabet one month later.

I'm pretty impressed by my own kid that he kinda knows so much without us really teaching him, and proud that he loves it. And to think that he could only talk after he turned two. He must be storing lotsa things inside that big head of his. haha.

Khye can now tells me things by himself, and he knows how to express to me that his leg is itchy, or that he spotted ants, etc so it certainly makes things way much easier now that he is very verbal, though he has some problems with some pronunciation.

He cannot really pronounce the sound '-er', so water becomes 'wati', doctor becomes 'docti', and uncle becomes 'uncky' which sounds like aunty, so it seems like he is calling all uncles aunties. haha.

He has this Doctor Playset that Min-yee got for him and he plays with it almost every day. He would wear the specs (I dunno why all doctor playsets come with specs. Do all docs supposed to be wearing specs?), and starts hearing my heartbeat and then put the plaster across my head. 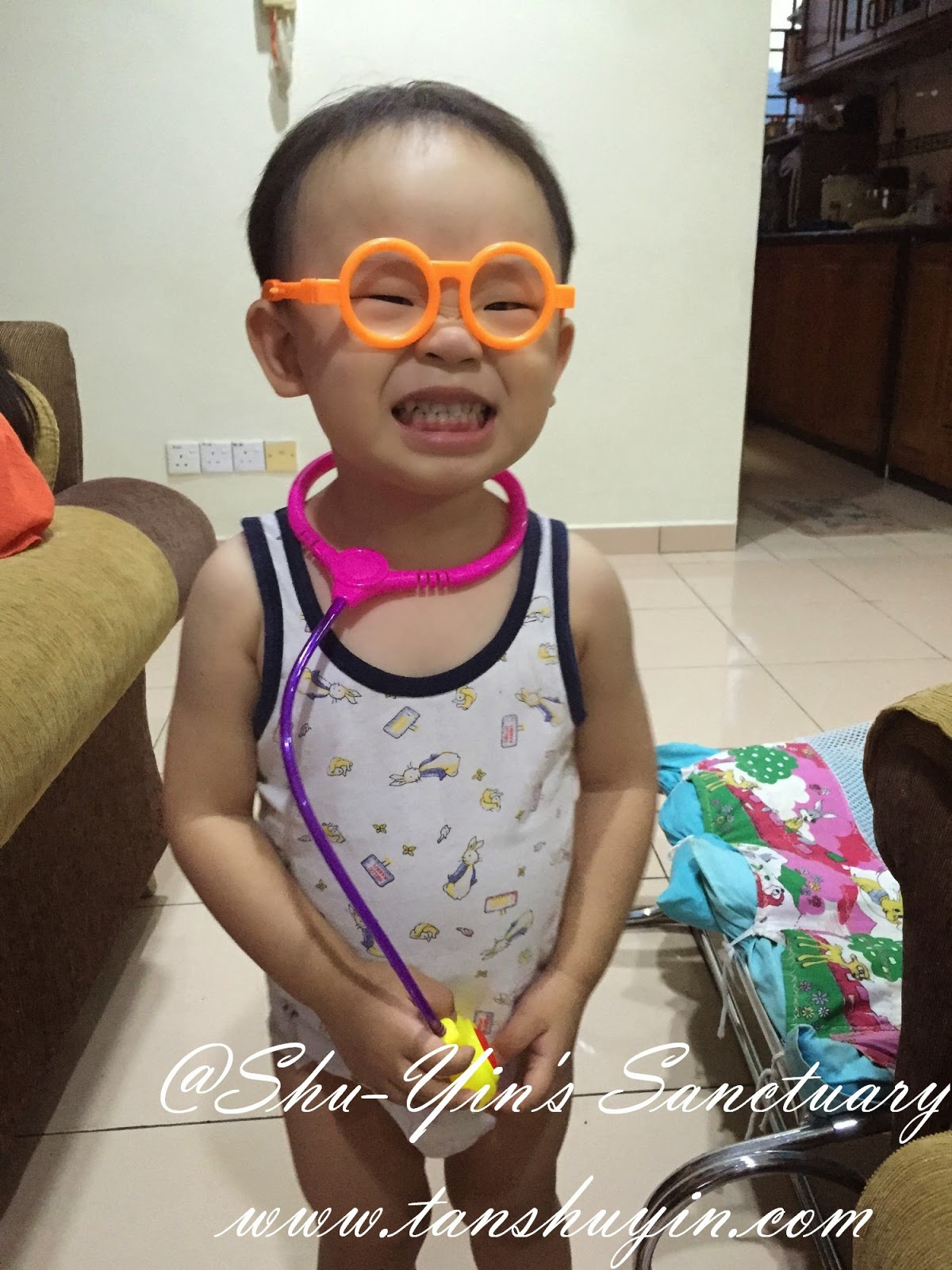 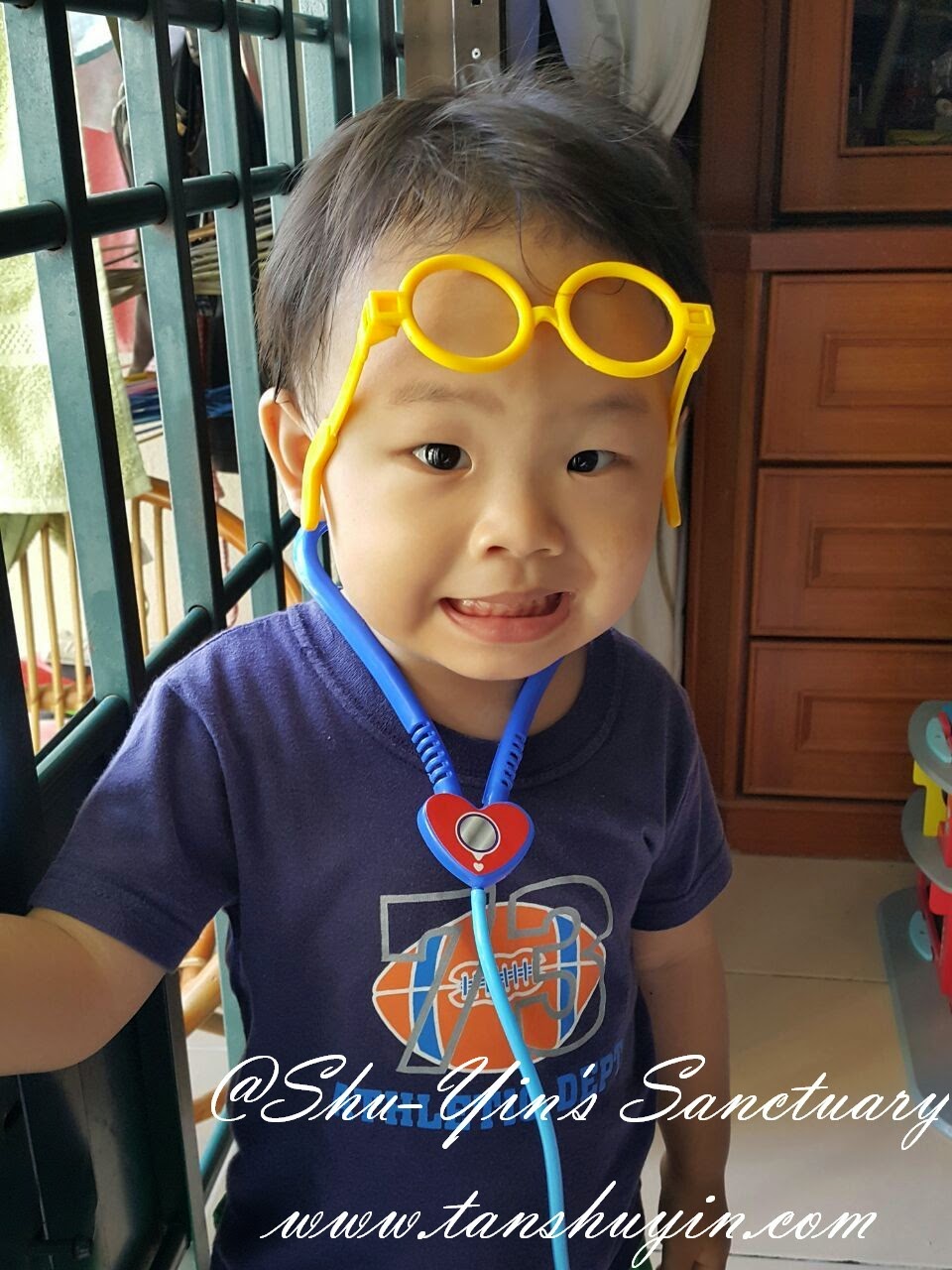 But this naughty boy is scared stiff of the real doctors.
It may be due to the fact that he was hospitalized quite a few times before he turned 1 yo (but I doubt he can remember it right?), or that all the recent visits to his pediatrician was to get his immunization jabs, since he rarely falls sick now.


Anyway, this is Khye about 2 weks ago waiting happily outside his paed room, but the moment we went through his room door, Khye was crying hysterically and screaming murder! Sigh.

Eating
It is so easy to feed Khye now. He eats practically everything. His current favourites are bananas or all kinds of fruits, rice and also mee-mee (noodles), and iced milo.

He eats everything ok so he gets a wholesome, well-balanced diet most of the time which I am pretty happy. 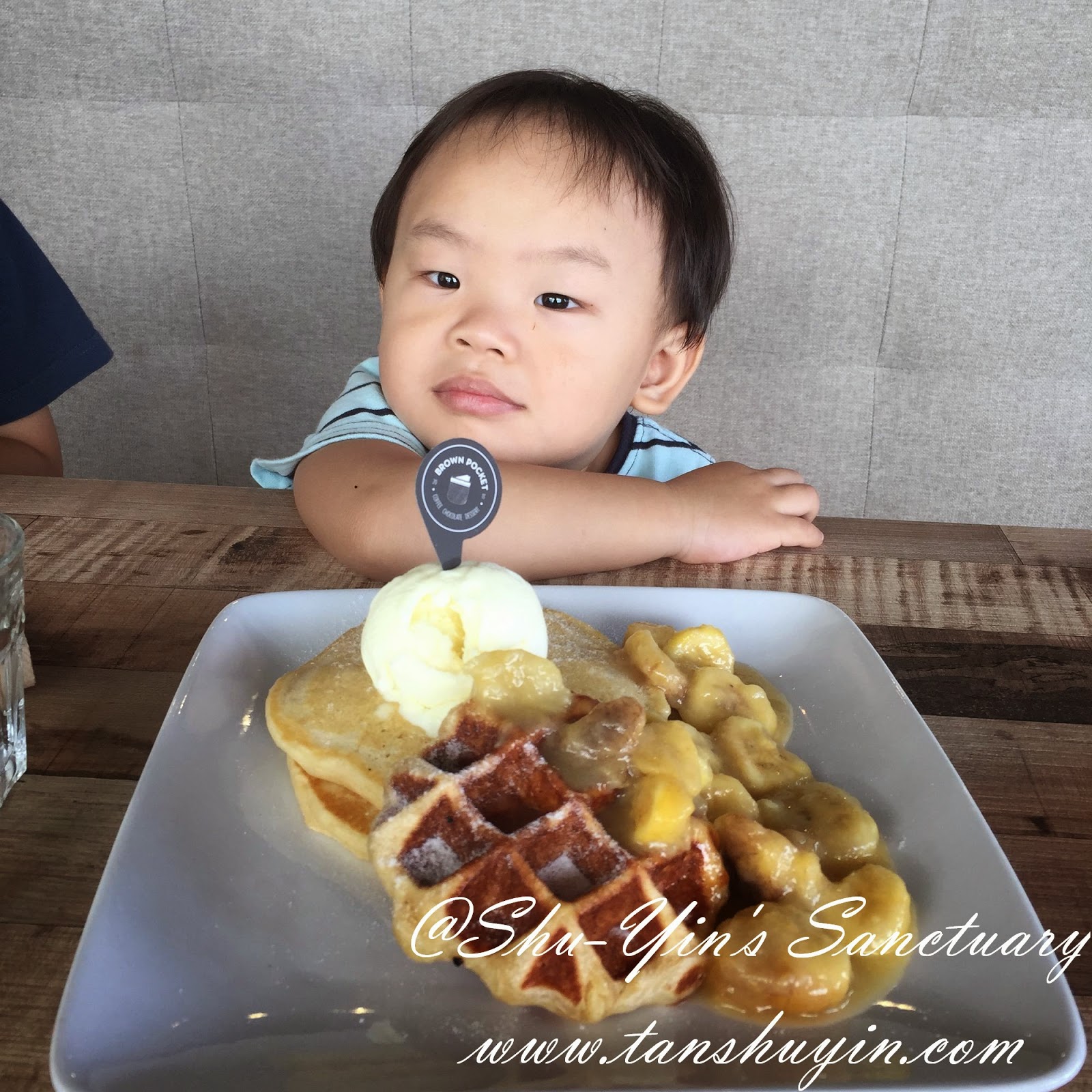 The only thing he doesn't really like are ice-cream and yogurt. These two are cold, so I think he thinks ice-creams and yogurts are the same probably.
So when Shern has ice-creams at McDonald's, he would just eat the cone.
Btw, McD charges me the same if I just ask for the cone. So I usually ask them for an empty cup and asks them to separate the ice-cream (put inside the cup) from the cone!

Breastfeeding
Before I was preggy, Khye was very addicted to my boobs, asking for 'nen-nen' as and when he likes it anytime of the day. Then, I had reduced his dependency on my boobs a few months ago. (I will talk about this in another separate post). He no longer needs to latch on to nap/sleep.
Anyway, as of now, I am considered STILL breastfeeding Khye, but he no longer asks for it as often he did a few months ago.


'Terrible Two' Stage Is Not Here YET!
Either I am blessed with a very good temperament toddler, or Khye's Terrible Two Stage is not here YET! I did read somewhere that some toddlers only go through that when they are 3yo or so. Well, I am keeping my fingers crossed that it won't come.
Khye is now 2 1/2yo and he is still a very smiley and good temperament boy.

This is his face every morning when he wakes up. Happy and smiley. 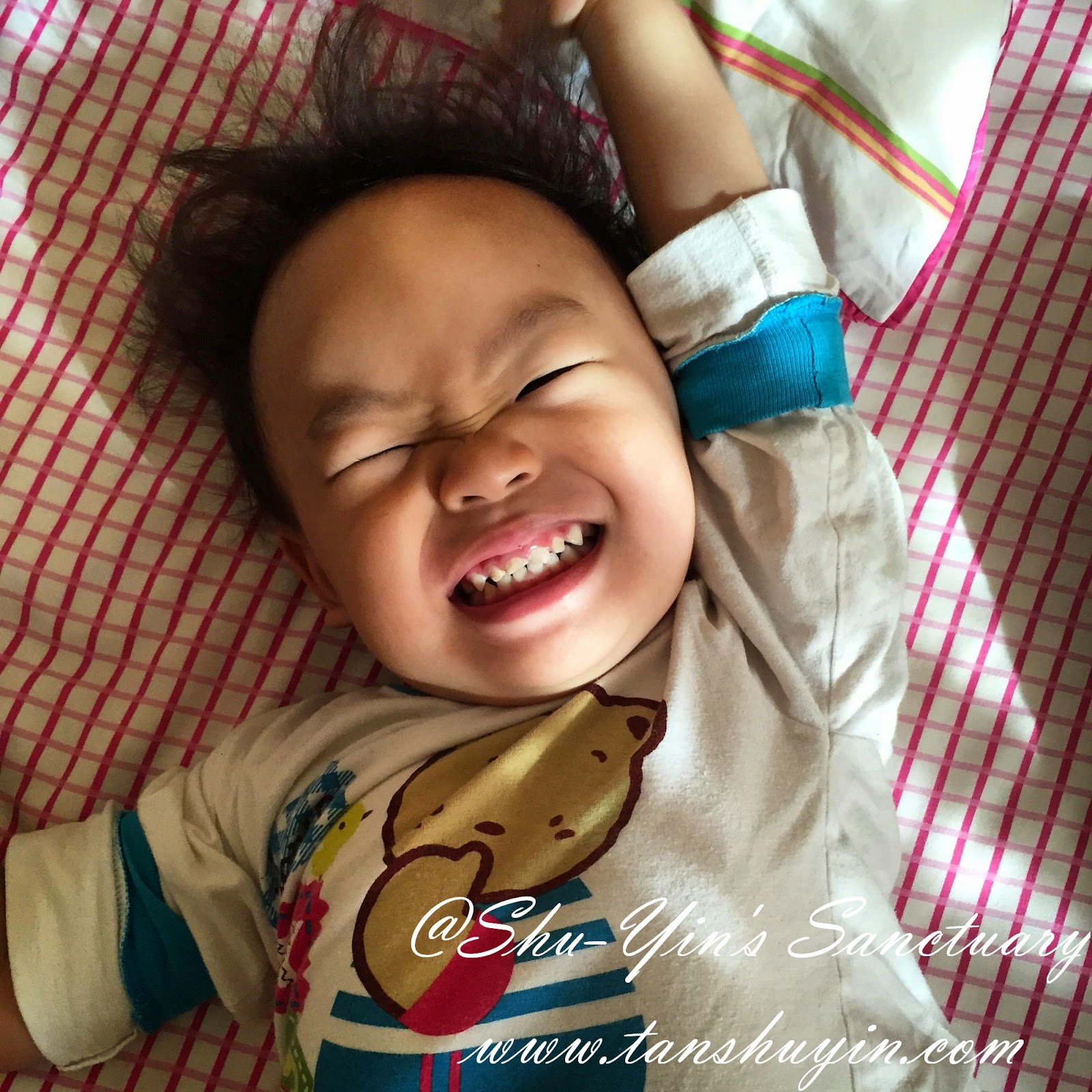 
Khye is also a poser for the camera. It is easy to ask him to smile when he knows you are taking a photo of him. And he has this thing for spectacles or masks. He loves wearing them. 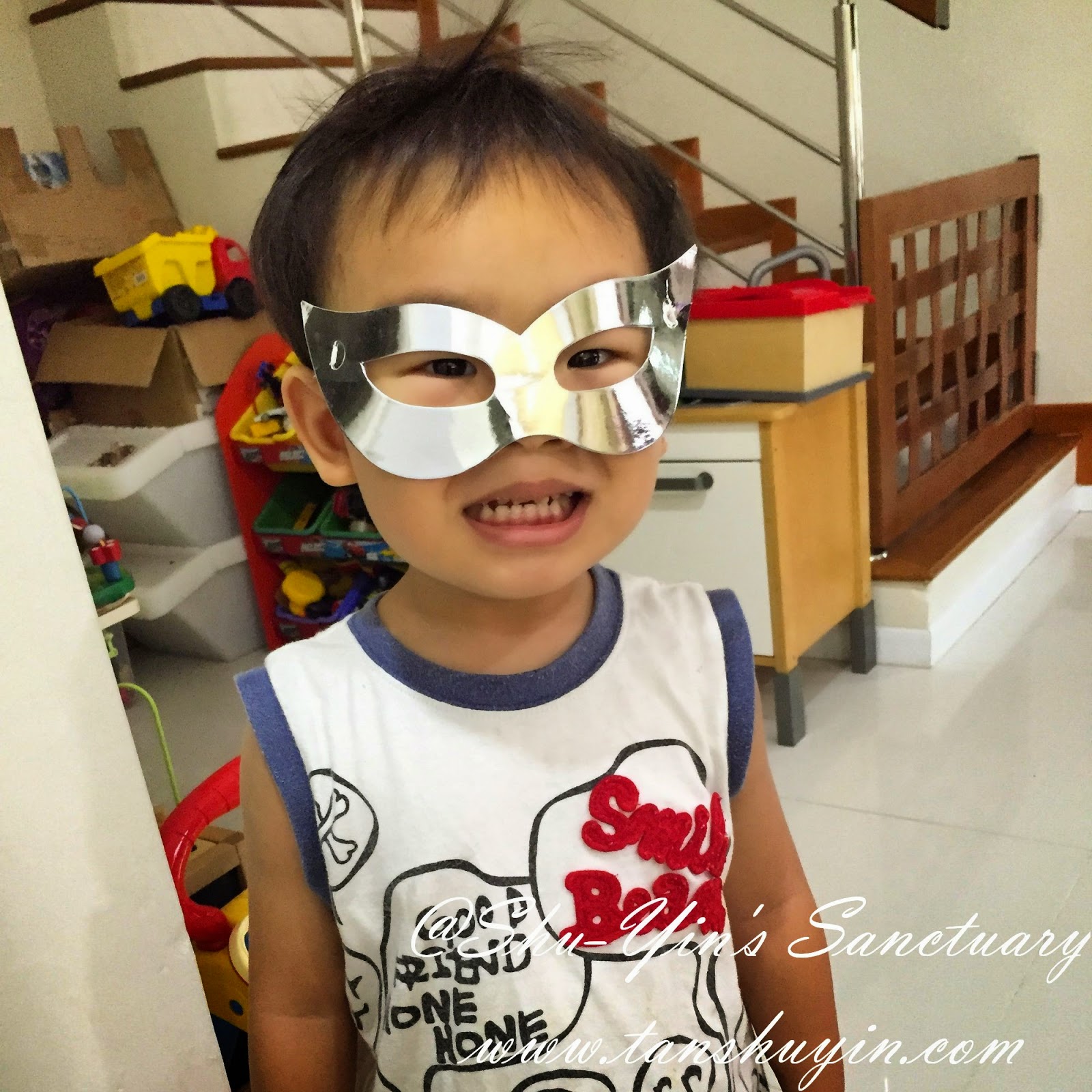 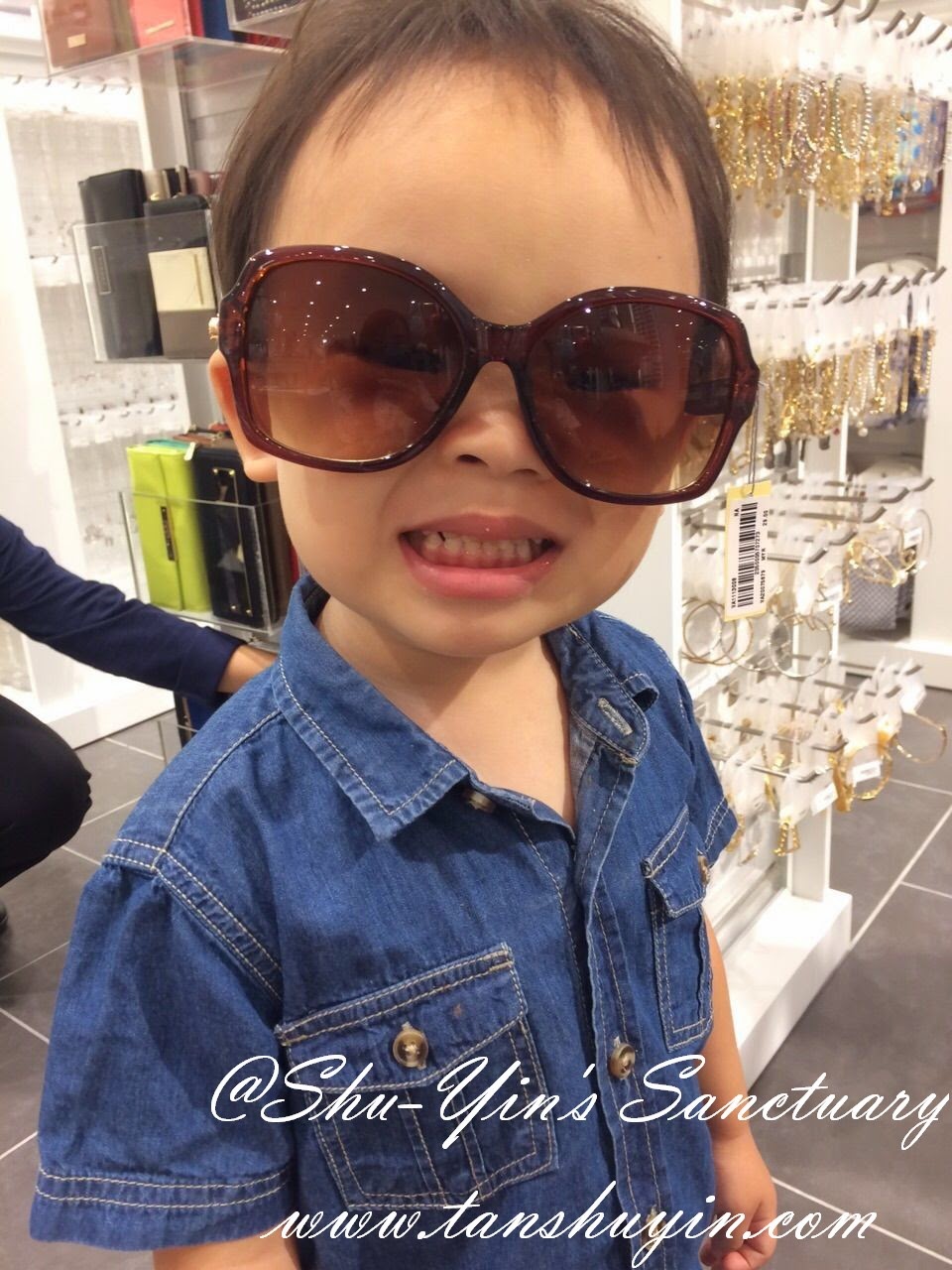 And look at him making his 'hiao' face. Cannot tahan. Haha. 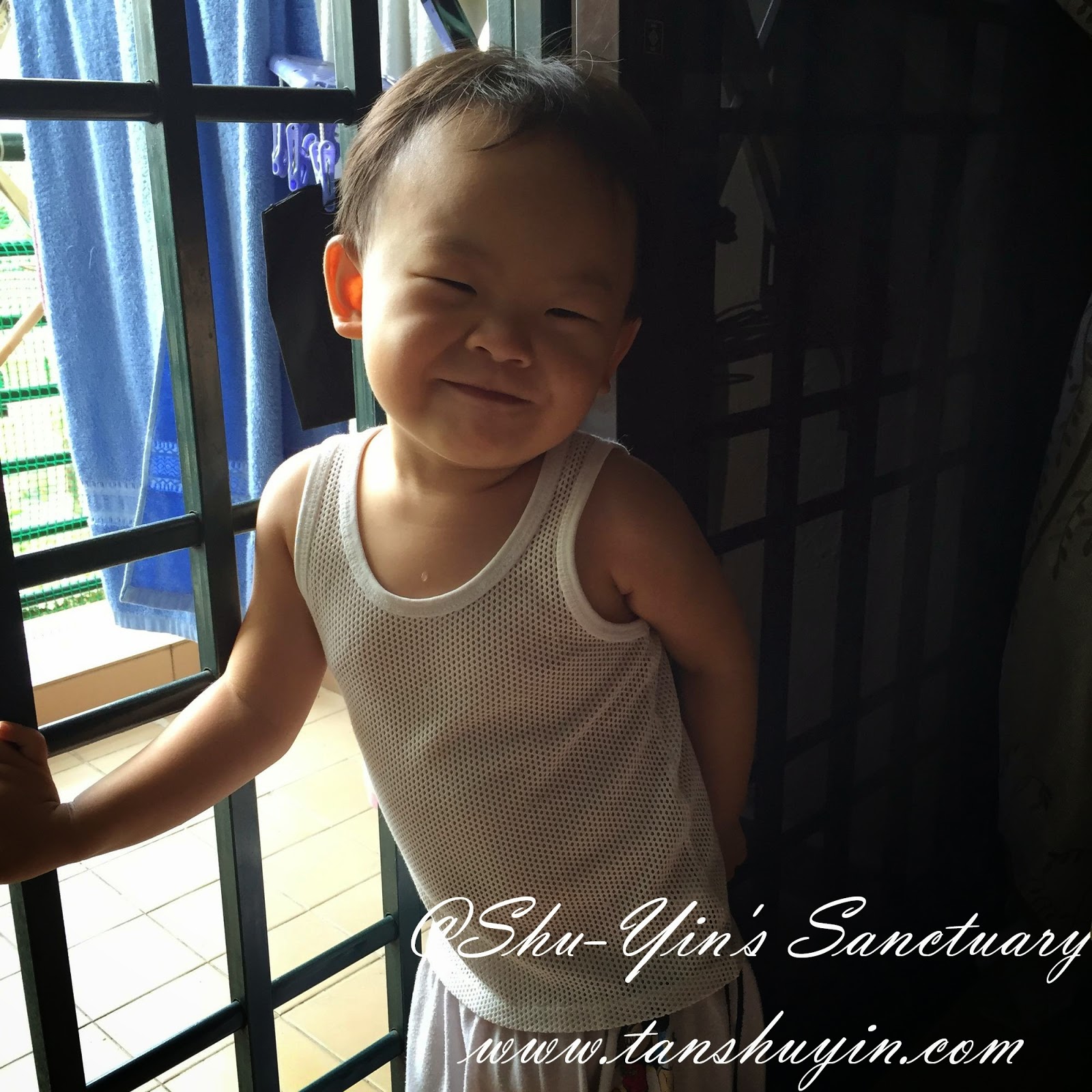 We were on our way home after the Hot Air Balloon Fiesta, and Khye was hungry and tired so I gave them some snacks in the car. But Khye fell asleep with a Coco Pop in his mouth.
(Yes, I did take it out from his mouth after taking a photo of his not-so-glory as I think that piece of cereal may choke him). 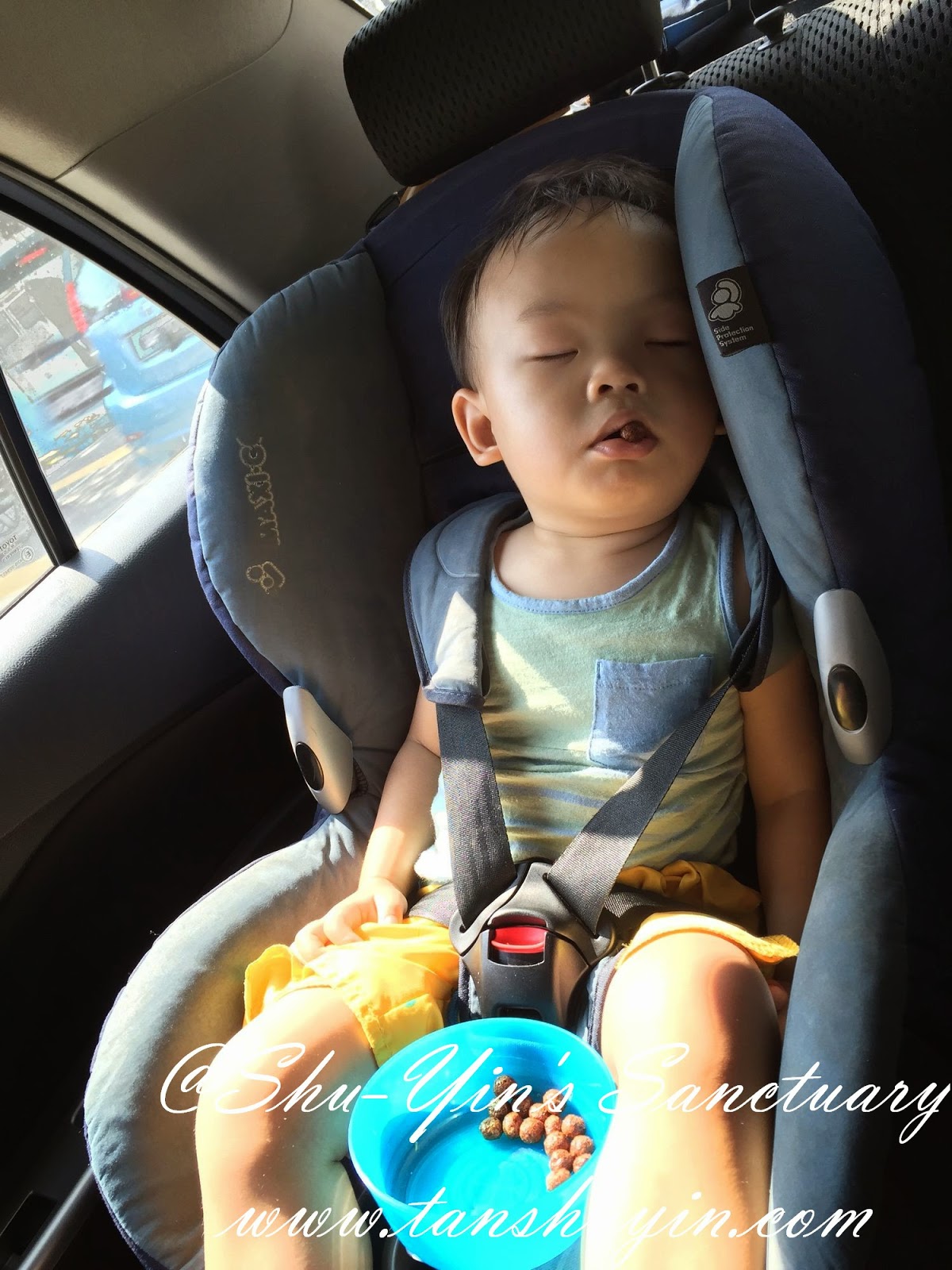 Khye has his bad days too.

Recently,Khye refused to take his afternoon nap. When I asked him to sleep, he would say 'No Sleep. No Sleep' and then he would run away from me. I let him be and he would continue playing with his toys.
And then 10 minutes later all was quiet in the house. I turned and looked and saw Khye fell asleep on the floor, his hands still holding the train he was rolling just awhile ago. His saliva dripped from his mouth to his cheek to the floor. Another not-so-glory moment. 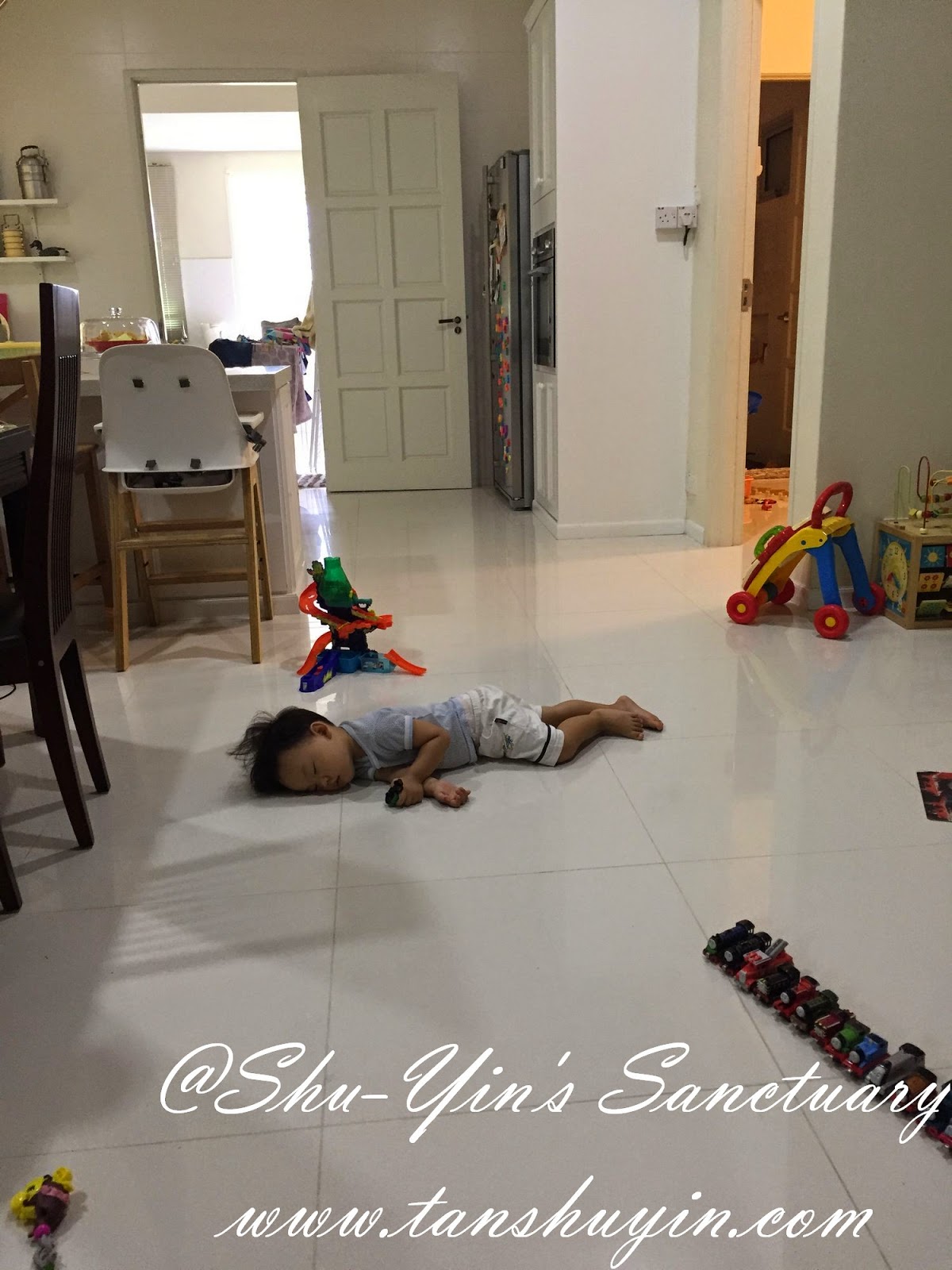 And Khye refused to nap again in mum's house just a few days after that.
Mum informed me that he would rather sit on his toy bike and then leaned his face on the wall and close his eyes, rather than sleep properly in Yee-Pho's arms or in the bouncer. Haha. 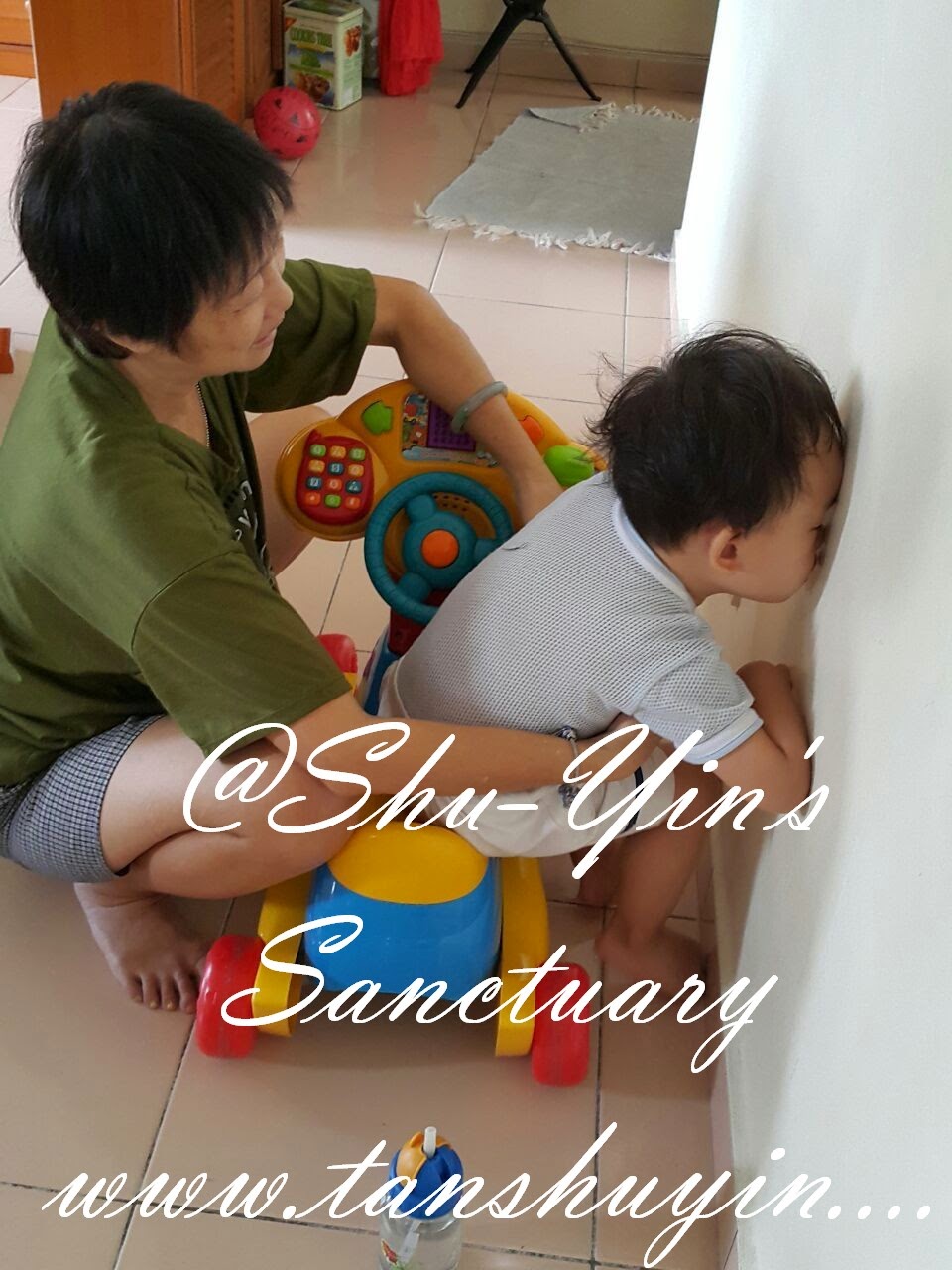 Going To Playschool
After months of searching and procrastinating on my side, we have decided which playschool to enrol him in. We have decided on a playschool which encourages play. I like their concept of 'When the kid has enough play, it is easy and the kid will be ready to absorb anything'! So I hope he will be happy there.

This is Khye, all happy and smiley when I told him he is going to school. He loves his Mickey Mouse school bag from his 3-Kau Kong and Kam-Pho.
It has been 3 days of 'trial class' last week and he is still lovin' the school and everything in it. And today he is still as happy as a lark on his first day of school (3+ hrs without mummy!)
Hope this lasts! 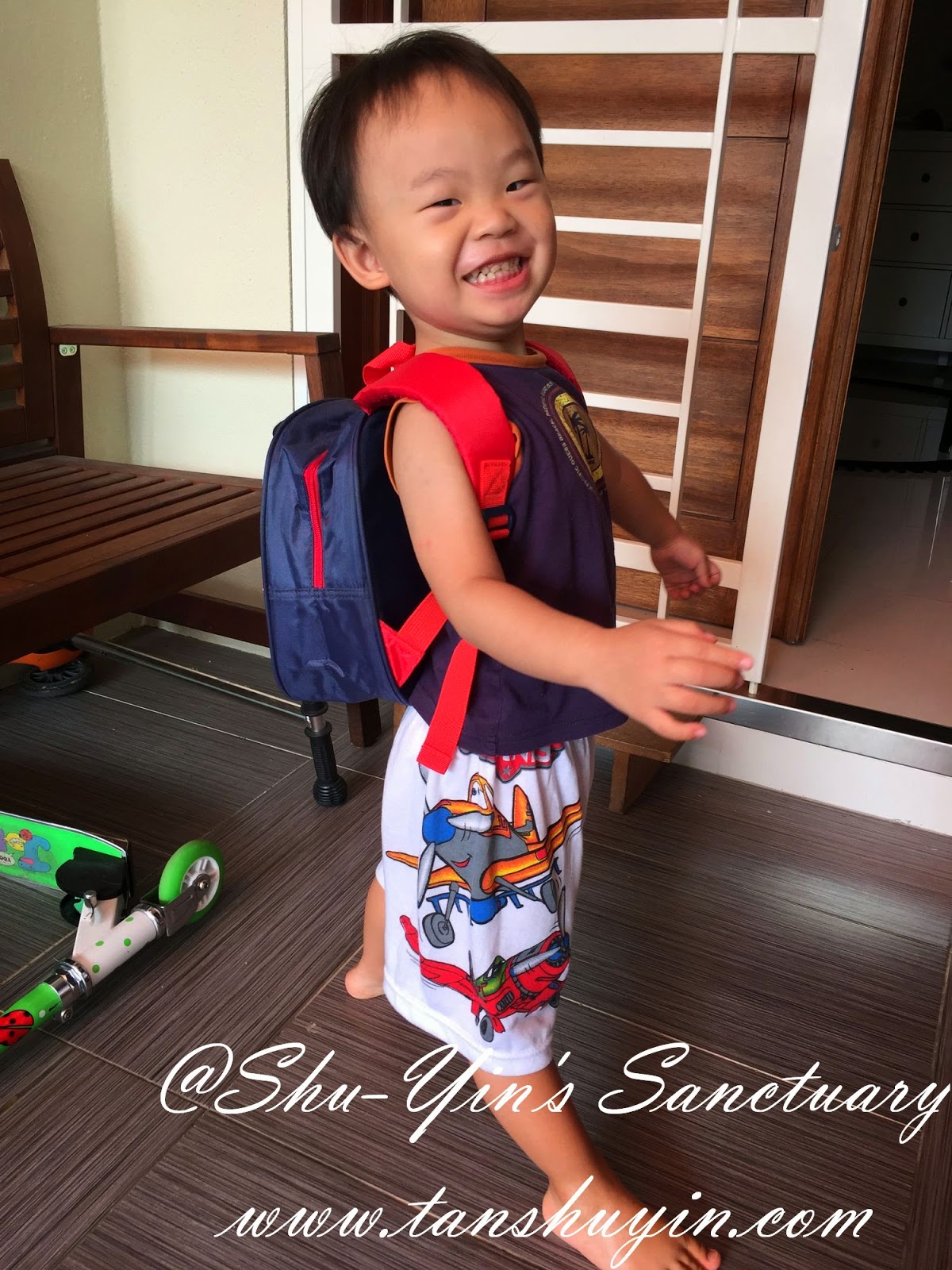 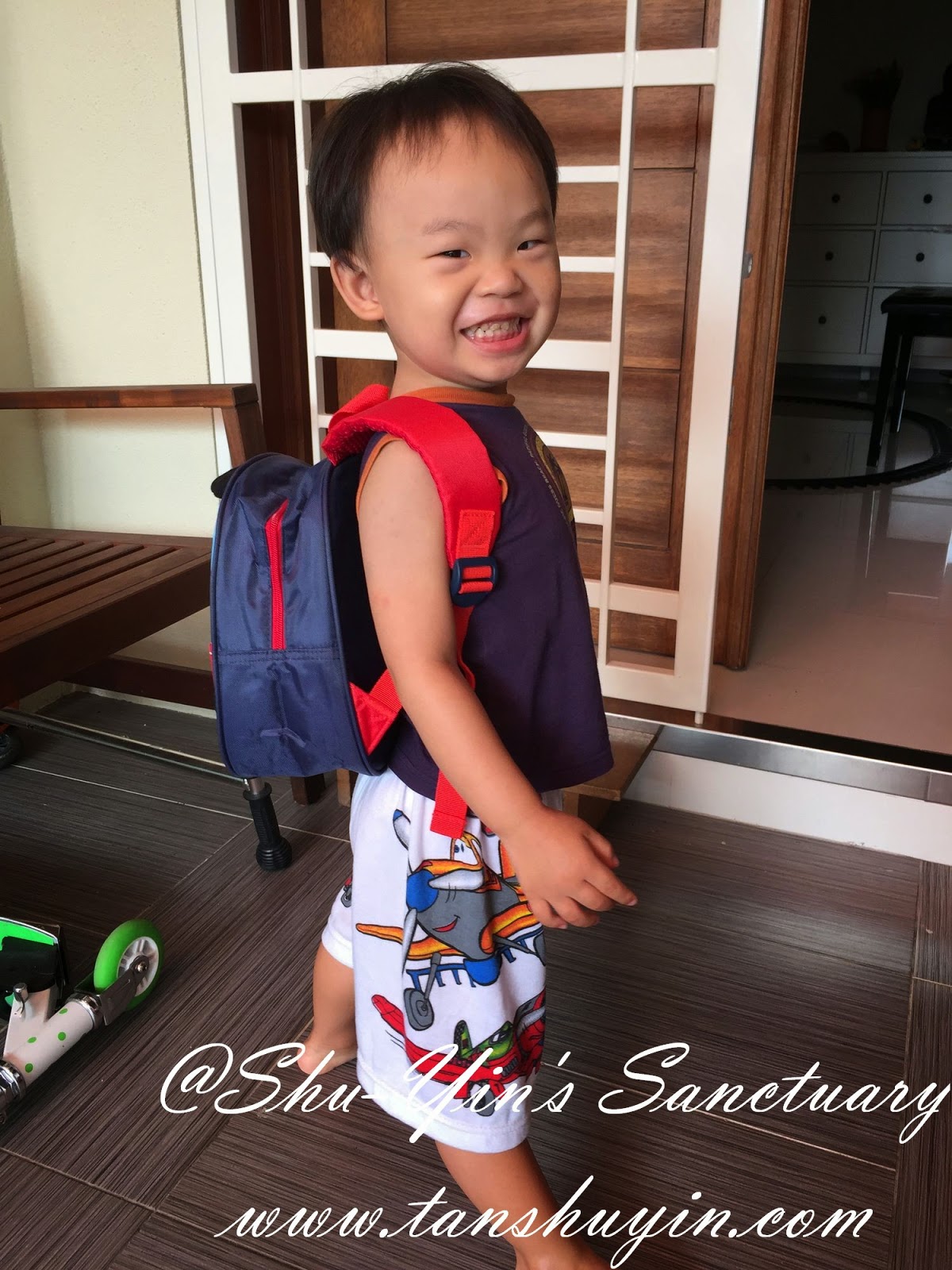 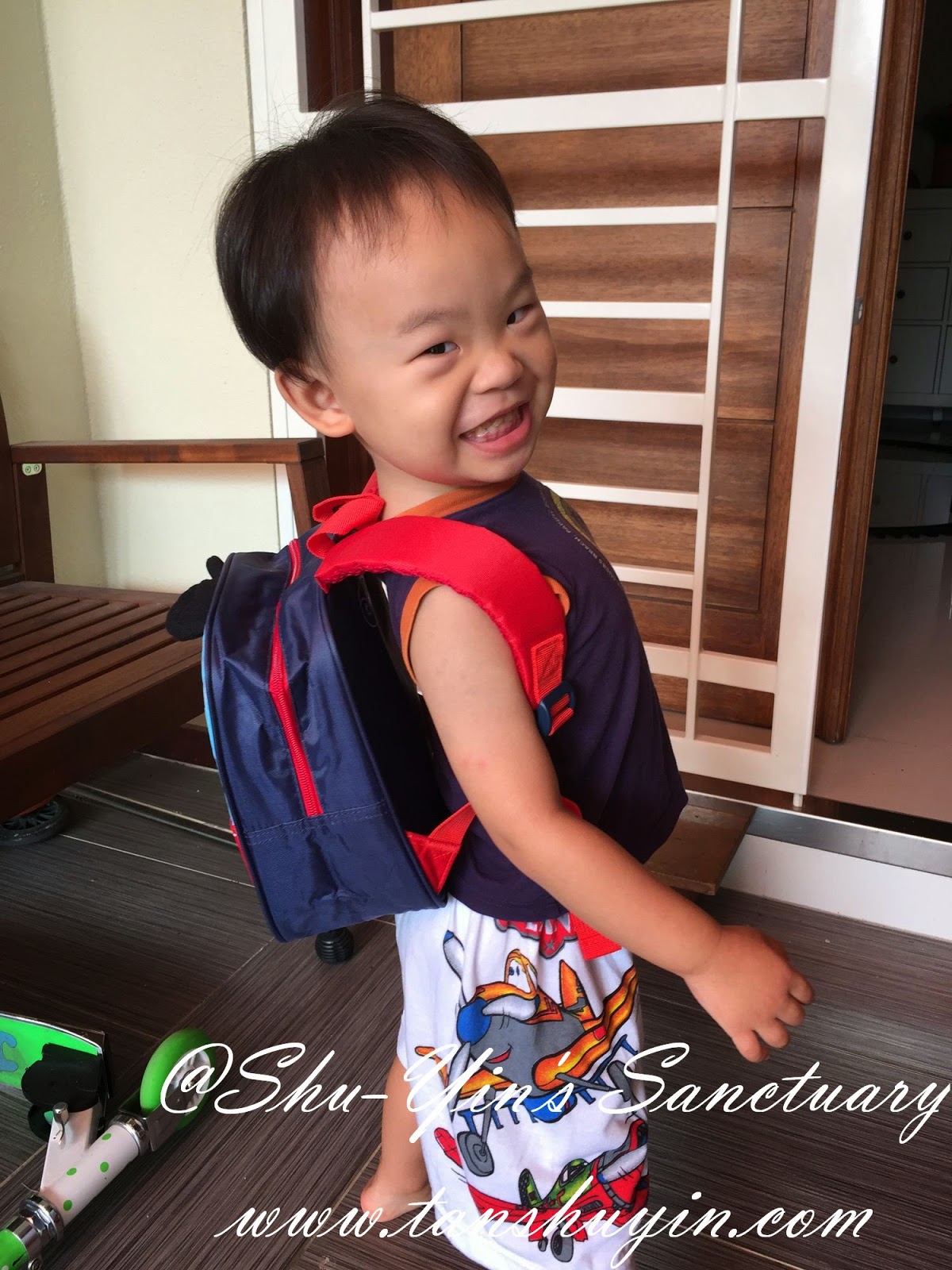